Anatomy of a False Consensus

HELP ENLIGHTEN YOUR FELLOWS. BE SURE TO PASS THIS ON TO FRIENDS AND KIN.

The illusion of a free press 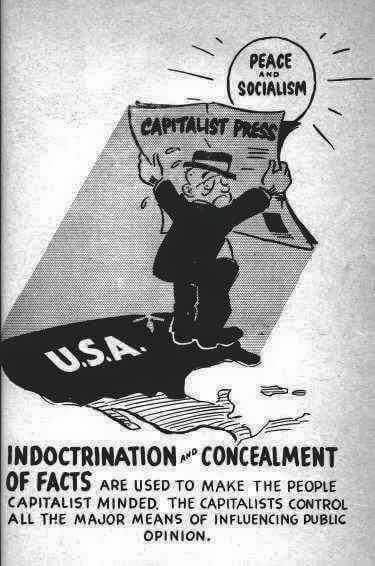 Superb independent journalist Jonathan Cook recently wrote a thoughtful piece on what he termed the “Great Western Narrative,” the deceitful storyline that we digest on a daily basis from our media about America’s role in the world. It’s a devil with a thousand names. It’s what evolutionary biologist Robert Trivers calls a “false historical narrative.” What Adolf Hitler called the “big lie.” It’s what French sociologist Jacques Ellul said we privately crave, implying a level of complicity few would freely acknowledge. And it’s what Noam Chomsky said were “necessary illusions.” That winsome fable that keeps us docile and distracted while the timeless tale of bloodshed for bounty is written just over the horizon.

George Orwell explained that “who controls the past controls the future...and who controls the present controls the past.” He seemed to mean that those who control the truth, control the people. Once you’ve colonized truth, there is no need to colonize anything else. Your work is done, since perceived truth is often the motive cause of action. Presently the United States government controls the official interpretation of the truth, and it essentially claims that the U.S., as set forth in its founding charters and exemplified through its long history, is a faithful evangelist of individual liberty and free-market democracy, sharing its exceptional boon with the curious, chiding the disinterested, and reluctantly prodding the incalcitrant to quit their crimes and join the community of enlightened nations, where human liberty blooms in full. This is the mental medicine that the public must swallow, a poison pill that forestalls the engines of revolution.

Peerless Australian journalist and filmmaker John Pilger explains why that story is a fairy tale:

“Since 1945, more than a third of the membership of the United Nations–69 countries–have suffered some or all of the following at the hands of America’s modern fascism: they have been invaded, their governments overthrown, their popular movements suppressed, their elections subverted, their people bombed and their economies stripped of all protection, their societies subjected to a crippling siege known as ‘sanctions’.”

These are the crimson facts that must be converted into an optimistic tale of good intentions. A tale that wins the acceptance of the populace, without which these forms of imperial brutality could not be effected, at least not without considerable friction.

Taking Stock: A Cast of Characters

Critical to achieving popular consent is the need for a mix of approving voices. To create a sufficient ecosystem of affirmation, you’ll need both anecdotal and analytical proofs. Hit the emotional chord and the logical chord one after another. Heartstrings and data graphs. This is not a new model of ‘manufacturing consent’, as Walter Lippmann called it in his seminal Public Opinion in 1922. It has long been a tactic of those in advertising, marketing, and public relations. It always helps, when selling a product, to have a diverse selection of legitimating voices. Authority helps. Peers help. Crowd support helps. Insiders help. You’ll see the same model at work in advertising today. Two out of three doctors recommend. Four stars from 550 customer reviews. Seventy-five percent of respondents preferred. In two double-blind clinical studies. As someone who suffers from, I trust.

If freedom and democracy are the movie posters that sheathe the reality of imperialism, then the onscreen mise-en-scene is populated by stock characters that supply the illusion of debate, of democracy in action. What it really is, is the insular consensus of a hidebound elite. Their children aren’t being deployed, their jobs aren’t being offshored, their paychecks aren’t being garnished...
While there is no intrinsic evil in gathering up a range of advocates to buttress one’s pitch, this model of influence is easily perverted. At the more innocuous end of the spectrum, a movie promoter offers an implicit quid pro quo to a well-known reviewer: a first look for a positive review. At the dark end of the spectrum lies the political press and mainstream coverage of foreign affairs. This is where the model is employed to sell entire nations on a different kind of product: blood conquest. To sell that product you’ll need a messaging campaign that keeps the population pacified and patriotic. Bury the side effects in the nineteenth paragraph. Link out to the uncomfortable facts. Or don’t mention them at all. Propaganda at this end of the scale is effectively advertising masquerading as journalism.

Taking the instructive case of the Syrian War, let’s look at a handful of the characters the mainstream media has deposited into their false historical narrative. Gathered from mid- to late-April, listen to the media flog imperial fictions about Syria’s Bashar Al Assad and a chemical attack that was neither verified or attributed, and later found to most likely be a false flag. What’s important here is that a diversity of voices share a common view.

Note the diversity of sources we’ve touched upon: a conscientious academic; a sardonic political cartoonist; a grief-stricken exile; a hard-nosed foreign policy realist; and a moral crusader. All are of a singular mindset: we must attack Syria. To anyone reading the news at hand, namely the MSM, it seems a range of voices from across the social spectrum have found common ground. This is what Joseph Goebbels meant when he said the idea of propaganda was to "...to present an ostensible diversity behind which lies an actual uniformity." To that end, this array of voices are functional necessities of a successful propaganda campaign. (Without question, it is also necessary to shotgun these voices across corporate-owned media channels on a weekly basis in order for the story to stick.)

We are all influenced by it, whether we like it or not. In the book of literary critique from which this article takes its name, critic Harold Bloom said his work on influence was an attempt to “forge a weapon” against a “gathering storm of ideology.” We do need weapons of wit and irony and fact to wield in the battle against groupthink. Uncovering the banal techniques by which false narratives are shaped is one of those weapons. Seeing the mechanics of a thing often helps demystify it.

As Mark Fisher writes in Capitalist Realism, “...in order to operate effectively, capitalism’s rapacity depends upon various forms of sheathing.” If freedom and democracy are the movie posters that sheathe the reality of imperialism, then the onscreen mise-en-scene is populated by stock characters that supply the illusion of debate, of democracy in action. What it really is, is the insular consensus of a hidebound elite. Their children aren’t being deployed, their jobs aren’t being offshored, their paychecks aren’t being garnished. Nor are they witness to the societies they wreck. The peasants they showcase, like a wounded exile during a SOTU speech, are just stage props to be discarded once they’ve served their purpose. It is, as Christopher Hitchens wrote, the manipulation of populism by elitism, sold to us at price others must pay. Caveat emptor.

Jason Hirthler is a veteran of the communications industry and recent author ofImperial Fictions, a collection of essays from between 2015-2017. He lives in New York City and can be reached at jasonhirthler@gmail.com.

About the Author
Jason Hirthler is a veteran of the communications industry and author of The Sins of Empire: Unmasking American Imperialism. He lives in New York City and can be reached at jasonhirthler@gmail.com.
Think!

GEICO does not pay us a cent. Not one nickel. We run this because we think it’s funny.

How Iran got economically socialist, and then Islamic socialist

nice detailed deconstruction. for a longer look at the process of dumbing down and replacing the democratic narrative of the 60s and 70s in Canada with the current ‘we’re all in horrible danger from terrorists all around the world so everybody be really careful what you say and do what your authorities tell you!!!’ narrative, part 2 of The Democratic Revolution Handbook – http://www.rudemacedon.ca/drh/000-home.html .