Mexico elects a new chief: glimmers of real change or more of the same? 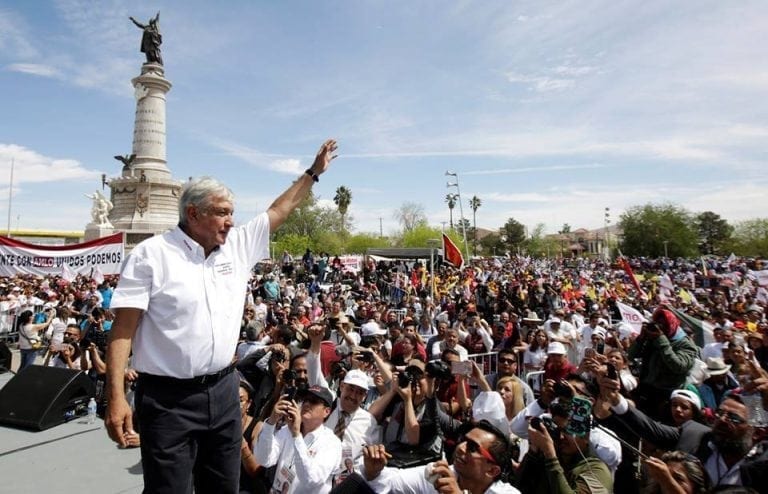 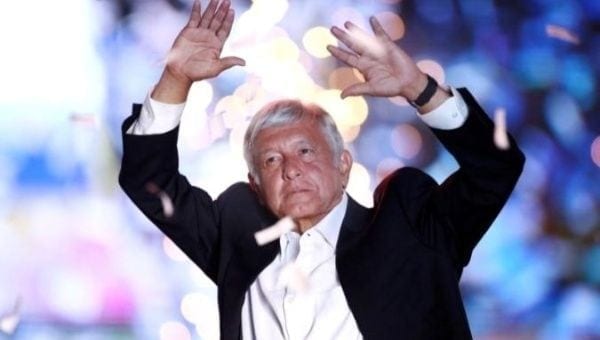 The Morena party’s leftist candidate, AMLO, won the presidency with at over 53% of the vote.  (Reuters)

OPINION
Several ex-Latin American leaders and other left-leaning politicians from around the world showed support for AMLO ahead of his victory at the polls.

Several former and current heads of state and government congratulated Mexico’s Andres Manuel Lopez Obrador (AMLO) on his stunning victory in Sunday’s general elections, where preliminary results showed he would win the Presidential election with over 50% of the votes cast.

The Morena party’s leftist candidate won the presidency with an estimated 53% of the vote, according to a preliminary Quick Count released by the electoral authority, National Electoral Institute (INE). Several ex-Latin American leaders and other left-leaning politicians from around the world showed support for AMLO.

Many of the officials took to Twitter to hail AMLO on a resounding triumph at the polls.

Venezuelan President Nicolás Maduro congratulated Lopez Obrador and the Mexican people on the victory saying it should signal a new beginning for the country. Maduro also called for the victory to open “broad avenues of sovereignty and friendship” between the people’s of Venezuela and Mexico.

Later in an official release, Maduro said the challenges facing the Mexican people would be tremendous but stated his belief that “the new Mexican leadership will face them strength and independence” while “guaranteeing the social rights of the People of Emiliano Zapata and Benito Juárez” supported AMLO and gave him victory.

He added: “Venezuela aspires to build together with the new Mexican government, solid bilateral relations, based on integral cooperation, non-interference in internal affairs and respect for the self-determination of our Peoples.”

Calling Lopez Obrador a brother as he hailed his “overwhelming victory” Bolivian President Evo Morales said: “We are sure that your government will write a new page in the history of Latin American dignity and sovereignty.”

While Ecuadorean President Lenin Moreno called for the continued”strengthen ties and unite hopes.”

Recently elected Costa Rican President Carlos Alvarado said he would work with AMLO  that throughout his administration to “continue strengthening the bonds of brotherhood and cooperation that unite both nations.”

Congratulations @lopezobrador_. His election as President with more than 50% of the vote offers the poor and marginalised a genuine voice for the first time in Mexico’s modern history.

I’m sure #AMLO will be a president for all Mexicans. pic.twitter.com/UE7oCDy4pP

The leader of the United Kingdom’s Labour Party Jeremy Corbyn also commented on AMLO’s victory stating it would give a voice to the poor and marginalized.

“Today brings a new beginning for México. Congratulations @lopezobrador_. His election as President with more than 50% of the vote offers the poor and marginalized a genuine voice for the first time in Mexico’s modern history. I’m sure #AMLO will be a president for all Mexicans,” he said.

French leftist leader and former candidate for Prime Minister Jean-Luc Melenchon also shared a picture of him and AMLO together saying “The Citizen Revolution continues in Latin America!!!”

For A Critical Defense of Mexico’s Newly Elected President

U.S.-backed rigging of the Mexican elections has finally failed. Mexico’s newly elected president Andrés Manuel López Obrador (AMLO) is someone the U.S. imperialists and their allied Mexican capitalists, death squads, and drug cartels have kept from the presidency through fraud and terror in the past.
…
The U.S. corporate media, including MSNBC, have now falsely labeled AMLO as the “Mexican Trump”. This is an absurd lie, as AMLO is a left populist, making him the opposite of Trump. This lie of painting AMLO with the ugly brush of Trumpism is no doubt the first shot in a propaganda war against the elected government of Mexico. This will be escalated if AMLO attempts to follow through on promises of demilitarizing the border with Guatemala, ending corruption and terror against the left, support for public education, and restoring Mexican agriculture devastated by the U.S. imperialists through NAFTA.

To the extent AMLO attempts to carry out these and related promises and comes under further U.S. imperialist attack, it will become necessary to defend AMLO from inevitable U.S. imperialist regime change operations.

Unfortunately, AMLO’s assurances against expropriations of capitalist property & the allegiances he has made to bourgeois legality and corporate freedom mean he is both entering the coming fight with both hands tied behind his back and mean the workers and farmers will get very little in terms of real gains from his bourgeois regime. Instead, it will take a planned socialist economy and workers and farmers government to solve Mexico’s problems. AMLO must be defended from the U.S. imperialists, but Mexico continues to be in need of a proletarian socialist revolution.

-Steven Argue for the Revolutionary Tendency

After the Amazon Tax Betrayal

The Real News Network on AMLO’s victory in Mexico; Michael Isikoff’s exposed as a charlatan (Video)

Argue’s conclusion is both right and wrong. Yes, Lopez Obrador’s hands are tied. But wrong in the intimation that his election means nothing. If only a weak light in the darkness of Mexico’s relations with los estados unidos, it is a step in the right direction: voters are beginning to see that light. Yet the reality holds that the proximity to the still powerful imperialist USA is a decisive factor. Pobre Mexico! What is it to do? No one has the answer.