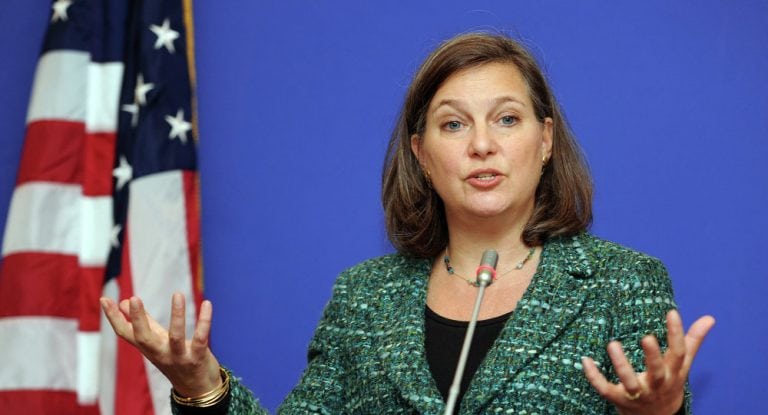 Nuland: as repugnant a Neocon as one can find. And still naturally held in honor by a sociopathic system. (Credit: Sputnik)

Hardcore neocon extremist Nuland was Obama’s point person on Ukraine as assistant secretary of state for European and Eurasian affairs.

By coup d’etat, she orchestrating the country’s transformation from democratic governance to Nazi-infested putschist rule – a despicable character by any standard, remaining unaccountable for years of high crimes.

Nuland earlier served in both Republican and undemocratic Dem regimes as US permanent representative to NATO, involvement in a Russophobic task force, and as Dick Cheney’s principal deputy national security advisor, among other public positions.

She and Kagan represent the worst of Washington’s dark side, supporting endless imperial wars, deploring democratic values at home and abroad.

The NYT disgracefully gave her feature op-ed space, a platform for her venom, calling two  upcoming summits “a moment of truth for Trump.”

On July 11 and 12, he’ll attend the NATO summit in Brussels, then meet with Putin in Helsinki, Finland for summit talks on July 16.

Joining the Trump bashing chorus for the wrong reasons, Nuland claimed he’ll “either restore American global leadership or kill it off, depending on how he plays our hand.”

She urged NATO unity as a US imperial arm, failing to explain it’s a killing machine unrelated to maintaining security for its member states – none threatened by Russia or any other nations.

A hardcore Russophobe, Nuland supports toughness in dealing with Vladimir Putin – turning truth on its head, calling him “an autocrat…who is set on undermining our democracy and global position.”

Despite its imperfections, Russian democracy is real – in contrast to fantasy democracy in America and the West where only its illusion exists, not the real thing because of rogue actors like Nuland and countless others like her.

She and likeminded US extremists abhor world peace, stability, rule of law principles and democratic values.

They’re serial liars, Nuland falsely blaming Russia for bilateral discord with America. She disgracefully accused Putin of “neutered decision-making at all other levels of his government” – a bald-faced lie!

She supports unacceptable increases in military spending by NATO members – instead of  responsibly urging large cutbacks to free up funds for vital domestic needs gone begging.

She lied accusing Moscow of “territorial ambitions” – a longstanding US and Israeli specialty.

She turned truth on its head, claiming “Putin survives on a governance model that requires $60-per-barrel oil, total political control of his citizenry and a kleptocratic stranglehold on the economy…reform impossible without more power-sharing than he will allow.”

Housekeeping begins at home, the US infested with public and private corruption. One-party governance rules with two right wings, perpetually at war on humanity.

Plutocracy and kleptocracy defines US governance, not democracy Republicans and undemocratic Dems abhor.

Nuland’s litany of Big Lies continued, falsely accusing Russia of aggression in Ukraine and Syria, disgracefully saying Putin wants “the United States out of Syria so that Russian forces can take over the eastern oil fields we now protect, and use income from those fields to pay for the war, among other motives.”

Russia got involved in Syria at the request of Damascus to help its forces combat US-supported terrorists. Putin’s principle aim is keeping these cutthroat killers from invading Russia’s heartland – better to fight them abroad than at home.

He works cooperatively with other countries. Washington exploits them worldwide, demanding subservience to its will.

Nuland supports this deplorable agenda, including endless US wars of aggression in pursuit of its destructive hegemonic aims.

The NYT and other media scoundrels endorse the same thing.

Nuland is one vindictive and poisonous _________(fil in the blank)!
She completely gutted kerry’s futile efforts to come to a modicom of understanding with putin, however weak they were. She was 110% supported by that profile in courage, obama.

Ah yes, Victoria Nuland, truly a “psychopath’s psychopath” if ever there was one! One can easily imagine her spending her free time torturing kittens, when she isn’t facilitating more planetary mayhem.

Contemptible excuse for a real human being. Empathy is totally missing in these criminal zioncons.