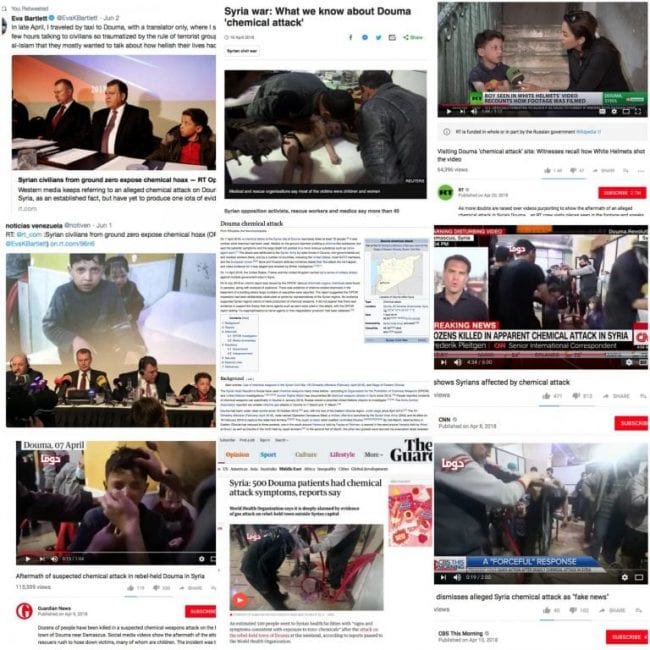 [dropcap]T[/dropcap]he following post will highlight the differences (misinformation) between what is presented in the official Wikipedia page on the April 7th, 2018 alleged chemical weapons attack in Dhouma, Syria and the official OPCW report (released July 6, 2018) in relation to MSM reporting and evidence at the Wikipedia page on the subject. The alleged attack was reported to the US authorities and mainstream media by the White Helmets who have been exposed as terrorists posing as humanitarian rescuers of small children. Extensive evidence proving the White Helmets are actually linked to al-Nusra Front, Al-Qaeda and ISIS terrorists will be provided at the conclusion of this post.

The following screenshots display what is currently, as of July 9, 2018, at the Wikipedia page on the April 7th, 2018 Dhouma alleged chemical weapons attack. Provided below the page screen shots will be additional extensive evidentiary material that has either been removed from the page previously or not included, thus proving that the page is highly inaccurate when it comes to what actually took place at Dhouma, Syria on April 7, 2018, and is presented by official Wikipedia editors. The additional non-included information brings the entire Wikipedia page and its 'official' sources into question and disrepute. 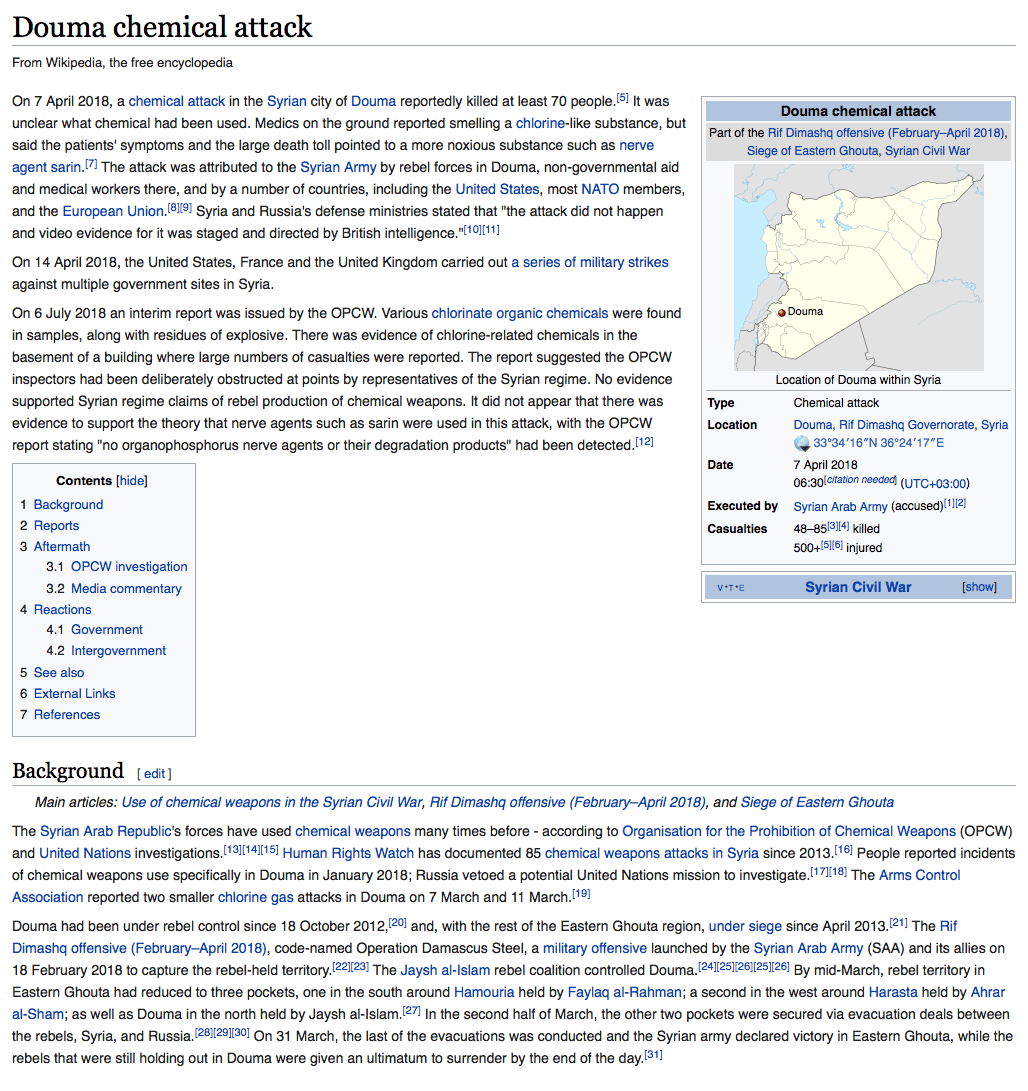 Additional references from the page will be included at the foot of this post along with the material proving the White Helmets are actually terrorists posing as rescuers and more information on the Wikipedia page on the subject of the White Helmets being misleading also.

It is now proven, due to the release of the OPCW report presented on July 6, 2018, that there was no Sarin or nerve agent of any kind used at the Dhouma event that took place on April 7th, 2018.

The official OPCW report states that no Sarin nor any traces of nerve agent were found by the OPCW during the course of their investigation. However, in contrast, numerous sourced articles used as evidence at the Wikipedia page state that Sarin/nerve agent was used during the event. These sourced articles included articles by the Guardian UK and the BBC, amongst others. Screenshots proving such are provided below:

On April 11th, 2018, the Guardian UK posted the following article: The OPCW report released on July 6th, 2018 now proves that the Guardian UK provided misleading information to its readership on April 11, 2018, information provided by 'medics' on the ground (i.e., The White Helmets).

Additionally, the White House also alleged Sarin/nerve agent was used and this now proven inaccurate information is not cited at the Wikipedia page (Link and screenshots providing evidence of such): A third screenshot reveals that CNN also provided misinformation which has been used as a source by Wikipedia. Proof that BBC and Reuters try to correct their reporting after release of the OPCW report. Evidence of BBC misreporting related to the event: Link to current BBC article on subject which obfuscates their earlier misleading reporting and mainstream media allegations of Sarin/nerve agent use.

The BBC article includes the following screen shot line to cover for their previous misreporting.

In contrast to the above article lets look at the BBC's article from April 16, 2018 which features information provided to the public that is now proven as misleading and inaccurate due to the OPCW report released on July 6, 2018. BBC quote and reported information from the White Helmets now revealed to be misleading and inaccurate as verified in the July 6, 2018 OPCW report on the Dhouma, Syria chemical weapons event that took place on April 7, 2018.

A highly notable omission from the Wikipedia page are the on-the-ground reports from One America News reporter Pearson Sharp who was able to attain direct access to the hospital in Dhouma over a week and a half before the OPCW team and the CBS reporter cited at the Wikipedia page. There he conducted interviews with doctors from the hospital as well as local citizens and children that were featured in MSM news stories. All these 'victims' (as the MSM referred to them) stated on camera that the White Helmets started the confusion and that there was no chemical attack, and that it was staged. Witnesses revealed to Pearson Sharp that the White Helmets simply started acting as if there was a chemical attack and grabbed children and started spraying them down with hoses in the hospitals emergency room.

Directly after the April 7, 2018 event I put together a large post featuring the reports of Pearson Sharp and numerous other reporters and investigative researchers. All of this information from all these highly reputable sources is also excluded from the Wikipedia page as of July 9, 2018.

Another important piece of information missing from the official Wikipedia page on the event is the fact that the Russian government news agencies Sputnik and RT were able to talk to the young boy (Hassan Diab) that was featured in the MSM video reports on the Dhouma chemical event and his father allowed him permission to travel with the Russian delegation to OPCW headquarters in Den Hagg, Netherlands to report that the event was staged. It should be noted that the simple fact that Hassan Diab is alive and well proves the event was a hoax, one that US President Donald Trump nearly started WW3 over when he ordered US forces to bomb Syria on April 13, 2018.

Link to RT article proving such (also not included at Wikipedia page): Proof the same young boy, Hassan Diab, was used by numerous western media sources as an alleged victim in the chemical weapons attack. French government and Fox News used the same children to push the propaganda provided by the White Helmets: In the following CBS video, National Security correspondent David Martin states, on numerous occasions, that nerve agent was used at Dhouma. The OPCW findings now clearly prove that CBS and David Martin (at the Pentagon) provided false and misleading information. Note that no corrections have been made to the Wikipedia page in regards to such false and misleading statements as of July 9, 2018.

RT exposes the truth about the video footage that western mainstream media used to portray the chemical attack:

Of course, the video above is not included at the Wikipedia page either, for it would reveal that Hassan Diab is alive and well and that he clearly stated that the children were outside when the White Helmets grabbed them and took them into the hospital and started pouring water on them. RT and the Russian Ministry of Defence has revealed the true story and interviewed eyewitness that are not included at the Wikipedia page:

Link to CNN video of 'reporter' smelling a backpack for chemical agents:

Note: Even a cursory examination into the nature of sarin gas reveals that Sarin nerve agent, as explained in a paper from California State University, Los Angeles, is clear, odorless, and tasteless – meaning it can’t be detected by smelling a backpack. It’s also incredibly lethal, having the ability to kill within “minutes,” according to chemical experts. “Inhaled or absorbed through the skin, the nerve agent kills by crippling the respiratory center of the central nervous system and paralyzing the muscles around the lungs.” Note that CNN is listed numerous times as a credible source by Wikipedia editors in relation to the April 7, 2018 event in Dhouma, Syria.

For more information on The White Helmet terrorists and Wikipedia's misinformation related to such, I recommend the following post I put together two months ago directly after the Dhouma false flag.

MSM Misinformation: Comparing the Wikipedia Page of the White Helmet Terrorists with the Actual Images From Their Own Facebook Accounts

Additional recent posts featuring reactions from investigative researchers and reporters in regards to the OPCW report released on July 6, 2018 is included here also:

Additional Tweets and Articles From Journalists and Investigative Researchers Question Aspects of OPCW Report on Alleged Chemical Weapons Attack in Dhouma Syria on April 7, 2018 And MSM 'Reporting' Related To Such

EXCELLENT COMMENTS} On wet noodle demonstrations and other liberal delusions

US FORCES LEAVING AL-TANF…AND SYRIA. Russia remains in the Levant