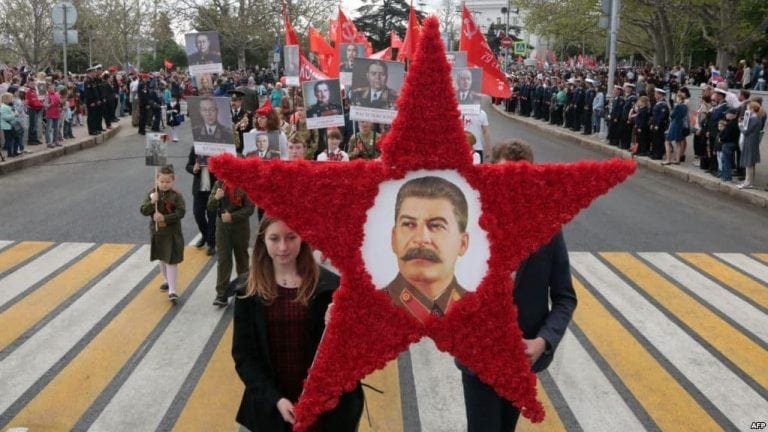 Stalin remains an admired even loved historical figure in Russia. Apparently he’s not seen as guilty of the mountain of accusations leveled at him by the Western propaganda machine.

The system’s mind managers and their numerous shills and advisers did not quite anticipate it, but the rise of the Internet as a platform for free-wheeling opinion and information, and later the formation of social media, have allowed some extremely cogent voices to be heard. Their audiences are still (and likely to remain in the near future) painfully small despite the urgency of their messages, but —here’s the problem for the establishment—they are nonetheless expanding, getting traction, while the mainstream media’s hold on the public mind continues to erode at alarming speed.

This was a “flaw” in the online world scheme that the empire is now frantically trying to correct by, among other things, branding dissenting speech as “Fake News” (while, with typical cynicim, burying the undeniable fact that it is precisely the capitalist mass media which have engaged in fake news for generations if not from inception); painting critics of its rather obvious criminality, warmongering and corruption as “Russian agents” or “useful idiots”, and, naturally, putting out the fires by destroying the building themselves. In this case the first stage of this sordid approach has manifested itself in the Congressional jawboning of the nation’s top social media executives, particularly Facebook’s somewhat clueless Mark Zuckerberg, along with his more politically cunning lieutenants, forcing them to adopt a more intrusive censorship of dissenting views.

The somewhat crude methods used by Facebook, Twitter and the rest to eliminate unwanted opinion (including underhanded harassment) are apparently working to some degree, although the desirable level of silencing is not yet wholly accomplished; after all the pretense of democracy and freedom needs to be preserved. No one knows what the situation will be in a year from now and less so five years, events are moving extremely fast. Because of that, and because of what is at stake at this unprecedented moment in history, the value of the truth is higher and more precious than ever, and the window for truthful information closing almost before our eyes. This is the context in which lucid opinion and information by the likes of Luciana Bohne (whose name does mean “Light”), a true high-caliber revolutionary intellect, is presented to the masses via the improbable ultra-capitalist Facebook.  Get to know her while you can, and I hope you absorb some of her wisdom.

Below, a sampling of her important work.

TALK TO ME ABOUT “RUSSIAGATE”
By Luciana Bohne 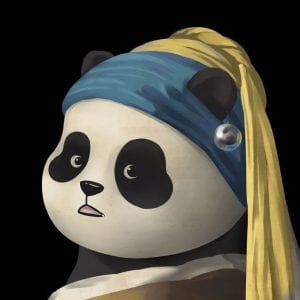 [dropcap]T[/dropcap]here was a Great Terror in Russia, but it wasn’t the one you’re thinking of. That one (1936-38) was a second “Russian” civil war, caused by internal and external agencies set to overthrow the Soviet government. The Great Terror I’m thinking of is the period 1992-2000, the so-called “transition” to capitalism. Perhaps we should call it the Third Civil war–and the fifth time that Western capital “interfered” (to put it politely) with the right to exist of Russia/USSR. The first “interference” occurred in 1919, when over 17 “democracies” (US, UK, et al) militarily invaded Revolutionary Russia, linked up with Russian counter-revolutionaries (nobility, bourgeoisie), destroyed industries, infrastructure, millions of lives, and practically annihilated the proletariat as few industries survived to employ it. Though, the Bolsheviks won the Civil War and Revolutionary Russia barely survived, Lenin had to take a step back, and re-institute partial capitalism, though under revolutionary state control.

It took Stalin’s administration to turn the Soviet Union into an industrial, agricultural, technological/scientific, and military power, at the time that the capitalist “democracies” sank into economic depression and, in many cases handed power over to fascism.

It was in the 1930s that the Soviet Union built schools, technical institutes, public housing, enormous industrial centers, modernized and mechanized agriculture, and gave Soviet citizens universal health care, education, maternity benefits, affordable housing–and vacations. Unemployment sank to zero. And it was at this time, too, that the second “interference” with popular democracy in USSR occurred, this time Nazi Germany–the ugly face of capitalist “democracy”–playing front man for capitalist interests, providing support for treasonous elements within the USSR–the Trotskists, the petty and rural bourgeoisie, and counter-revolutionary Germano-philes in the military. Defending itself against these conspirators, saboteurs, terrorists (in the Russian sense), who assassinated among others the second most popular Soviet leader, Leningrad’s party leader Sergei Kirov, the Soviet government rooted out and eradicated the subversives in three treason trials, which Western propaganda has sneeringly dubbed “show trials.” In fact they were the last act of a second civil war, and the Soviet Union endured. 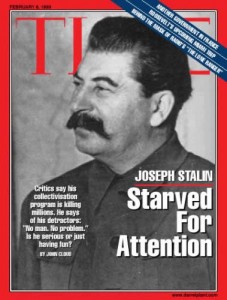 The demonisation of Stalin (and the Soviet Union) has been going on for generations, and it still rolls on in the West, virtually unchallenged, as “irrefutable truth” as the same formula is now applied to Vladimir Putin. A lie repeated a thousand times becomes the official truth.

Fighting for survival from “regime change” by traitors and saboteurs, the Soviet government was accused by Western propaganda of carrying out a “Great Terror,” when, in fact, the terror was the attempted subversion of the Soviet state. But isn’t this script familiar today? Assad’s Syria is invaded by proxy terrorists, the state defends itself from terrorists, and how does the West present it? Assad is a “terrorist” for defending the state. Soon after the foiled attempt at violent regime-change, the Soviet Union in June 1941 was invaded and occupied by Hitler. The Western democracies took three years after the invasion to open a Western front against Hitler, delaying while the Soviet Union fought and bled.  Only after Hitler’s failure to defeat the Soviet Union became manifest, did the “allies” land in Normandy (June 1944), opening a second front against Hitler, when the victorious Soviet Army was already on the way to Berlin. So, the third “interference” in the existence of the Soviet Union by capitalist plotting–via Hitler– ended, too.

The fourth interference is that of the Cold War, the containment of the USSR and the world communist movement. This was headed by the US, its advisors in the Council on Foreign Relations (supposedly an independent agency), porously spilling into the State Department, and the intelligence agencies that became the CIA, in association with anti-communist Nazi war criminals, collected by US, Britain, and Canada, protected from prosecution, and granted immunity in exchange for lending their various expertise (including techniques of terror and torture) in fighting communism. The program of “containment,” as the roll-back of communism was called, involved disinformation (which is how the American public was deceived about the “threat of the USSR” to their very existence and became the most historically imbecilic in the Western world)–involved sabotage and assassinations in Eastern Europe, involved rolling back of anti-colonial struggles, involved all the tricks of subversion, false flags, and backing of any mass-murdering dictator, willing to repress any of his people demanding social justice.

The last triumphant “interference”–and what I would call the third Soviet civil war or, even better, the last class struggle between Soviet Bolsheviks and Soviet petty-bourgeois social democrats–initiated by Khrushchev– resulted in the “dissolution of the Soviet Union,” the first workers’ and peasants’ state in history. THIS is what I referred to as the real “Great Terror” in my opening sentence. The Neoliberal Great Terror, known as economic “shock therapy.” Between 1992 and 2000, there were between five and six million “surplus deaths,” 170,000 people were murdered, the GDP fell by 50% (more than during German occupation in WW II), 70 million fell into poverty, death rates increased by 60%, like countries at war, life expectancy decreased in males to 57, abortions increased spectacularly, birth rates fell , , , suicides, tuberculosis, measles, diphtheria (eradicated in the 1930s) . . . In short (and this was supposed to be a short post) Russia, under “shock-therapy” “reforms” became the site of an economic genocide.

So now talk to me about Russiagate. For 100 years the real “Russiagate” was the sustained Western effort to destroy Soviet RUSSIA, its popular democracy, its social benefits, its support for oppressed people (including women) throughout the world, its ALTERNATIVE TO THE ANOREXIC DEMOCRACY you cling to as you would to the bubonic plague and which Russia is accused of undermining. IF ONLY!

I will always be grateful to Kim Philby for humiliating the CIA, especially the freak, James Jesus Angleton. For protecting Albania from infiltration by Western agents and spies. And for betraying his class–the rotten British imperialist class– in the service of the Soviet Union and world communism. He was no traitor. He was a communist. —LB 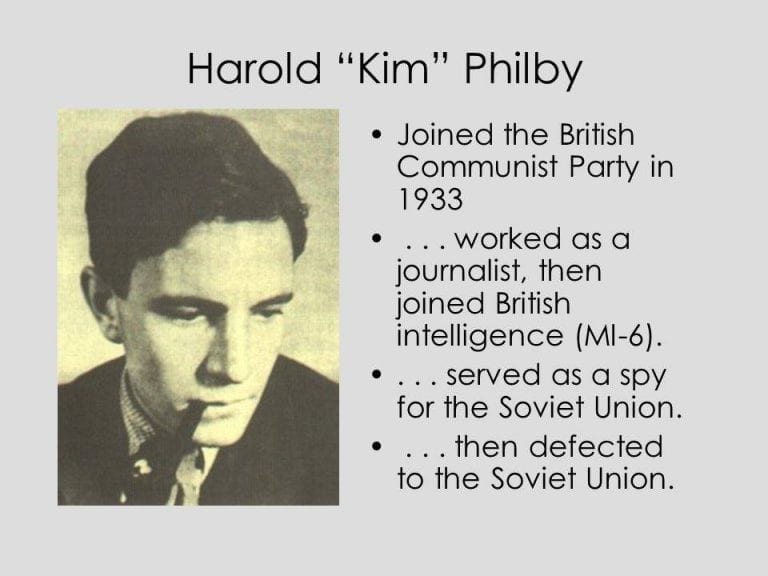 David Anthony Yep, a hero of mine too. Melita Norwood and the Rosenbergs as well. How can they be traitors? Unlike the imperialists and warmongers they opposed, they made the world a better and safer place.

Ashley Fitzbrian There’s actually a great tv miniseries called Cambridge Spies. By the BBC, but the spies are the heroes, British intelligence are bumbling aristocratic fools and the Royals are Nazi sympathizers.

SEE ALSO BY LUCIANA BOHNE: THE TERRORISM OF MORAL INDIGNATION 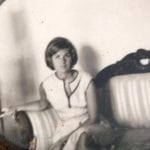