Matt Lauer, Charlie Rose, and now Leslie Moonves—three well known influential individuals deeply connected with the Western imperialist machine of disinformation—the first with NBC, the latter two with CBS— have joined the much-excoriated fallen tycoon Harvey Weinstein, former tyrant at Miramax and The Weinstein Company, on the perp walk, for what we might call "sex crimes", although the offenses in most cases can be more properly classified as "traditional male abuses of power." All toppled from their enviable positions of power, fame and money by the #metoo movement, which, although essentially bourgeois and careerist in origin, and thereby severely limited in its political perspective and social benefits, has brought this issue of female oppression to the fore. 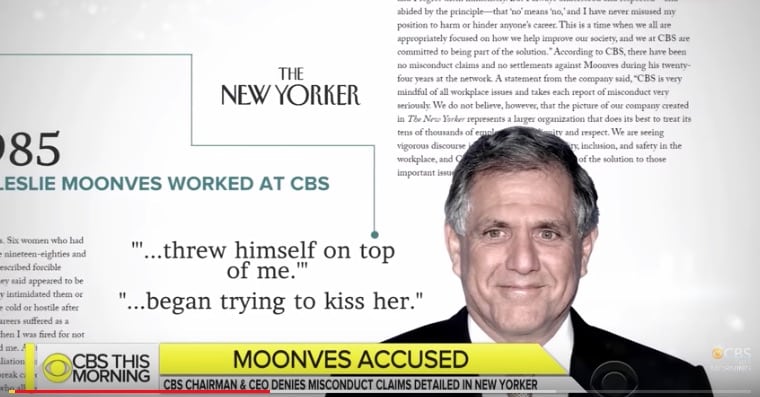 True systemic justice is impossible under a regime of extreme and unfettered capitalism—which this trio certainly profited from and shamelessly bolstered—so we must take what we can, even as tardy and mild a justice as this, merely the dismissal from their posts and a forced retirement to enjoy their ill-gotten fortunes in the hundreds of millions, albeit this time in relative obscurity. Bwaa, I'm about to cry. (Hold your tears, the capitalist media is shameless when it comes to rehabilitating the image of their fellow class criminals, just watch how they have been reselling George W Bush, as a case in point).

So, hear me out: In reality people like these should have been called to account long ago, not for these sex etiquette transgressions, serious as they may be, but for the much broader and graver crime of promoting wars "of choice", which the American empire has turned into an ugly habit in the last quarter century and for which we hanged media barons at Nuremberg. With wars still raging in the Middle East—the destruction of Iraq alone has claimed over a million victims, and Libya's and Syria's at least half a million, and others planned, plus a rampant and highly dangerous and hypocritical russophobia (matched by its obverse, the revolting coddling of Israel), the punishment for their behaviour should be far more severe than mere slaps on the wrist and some passing humiliation. After all, who cares, America is a culture with an attention span measured in the microseconds.

In the larger scheme of things all of these guys in the narcissist, self-referential and grotesquely overpaid media mob are being punished for the wrong reasons. Much like Al Capone, who was brought down by tax evasion and not his reign of murders, extortion and sundry other horrible crimes, Moonves, easily the guiltier of the group for being a member of the Big Media ownership/management class, the normally invisible bastards who run the Western disinformation machine (people like Rose and Lauer are just media mercenaries), and therefore a shaper of ultimate media content policy, should have been punished for crimes against peace, and, last but certainly not least, for gross squandering of vital information resources on sheer toxic escapist bullshit (1) at a moment of global emergency, when the world desperately needs a wake up call to fix its race to the ecological grave. That alone is  a huge crime for which ALL of these SOBs should be held accountable—and would be by an awakened humanity. But then again, how can you expect morality from the bosses of capitalism?


To close, a prediction: I'm betting that Moonves will not be immediately kicked off of his throne. The reason is simple: Corporate boards of directos are among the most corrupt groupings of any kind you can find. It is the usual practice to pad them with sycophants of the chairman or most powerful CEO (who frequently invites them to join to secure his power base), and the emoluments are mighty attractive. These are people who have been supposedly supervising CBS, and if this organsation developed into what it is today, from its rotten internal culture to its imperialist programming, it is also because the board of directors is very much part of the problem. Hence, expect no one to vote Moonves out, as they value their perks and loyalty to their benefactor far more than any principle. Moonves and the directors are literally cut out of the same cloth. —PG @ 3:01 pm

(1) Moonves is responsible for excremental shows like CSI, Without a Trace, CSI: Miami, Survivor: Guatemala, NCIS, and Cold Case. The CSI and NCIS television fungus alone is a disgrace. Never Trumpers dedicated to the lynching of the current White House occupant may be interested in learning that Moonves—seen by liberaloids as one of their own—had a perfectly cynical posture regarding his network's de facto promotion of Donald Trump:  "Of the tone of the 2016 Republican presidential campaign and the advertising dollars it delivers, Moonves said, 'It may not be good for America, but it's damn good for CBS.' He added, 'Donald's place in this election is a good thing."[24]
SOURCE: Wikipedia

About the Author
The author, with a lifetime interest in the reality-deforming effects of capitalist propaganda, is founding editor of The Greanville Post.

Liked it? Take a second to support Posted by Addison dePitt on Patreon!