Home Uncategorized Growing support for socialism in the United States

Growing support for socialism in the United States

BE SURE TO PASS THESE ARTICLES TO FRIENDS AND KIN. A LOT DEPENDS ON THIS. DO YOUR PART.
By Joseph Kishore, wsws.org 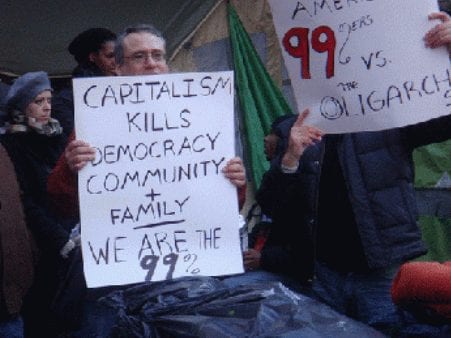 This is an excerpt. Original article here.

According to Gallup, overall most Americans still have a positive view of capitalism, but this year’s 56 percent positive rating is, by four points, the lowest recorded. Gallup included a list of economic terms, asking respondents to say whether they had a positive or negative image of each. Of these terms, only “socialism” increased its positive image, while “entrepreneurs,” “free enterprise,” “capitalism,” “small business,” “federal government,” and “big business” all fell.

The period covered by Gallup’s figures (2010-2018) is significant. It largely corresponds to the aftermath of the 2008 financial crisis and the tenure of the Democratic administration of Barack Obama, which came to power promising “hope” and “change,” while presiding over the largest transfer of wealth from the working class to the rich in US history. Obama left office proclaiming that the economy had “never been better,” but workers and young people clearly feel otherwise.

The growth in support for socialism, and the decline in support for capitalism, confirms the evaluation made in a resolution adopted at the Socialist Equality Party Congress last month. “There is a growing sense among substantial sections of the working class and youth,” the resolution states, “that capitalism is inherently unjust and that fundamental changes in the economic system are needed. While this broad-based sentiment has not yet developed into a mass political movement directed toward the ending of the capitalist system, interest in and support for socialism is growing rapidly.”

The growing interest in socialism terrifies the ruling class. It coincides with initial expressions of the resurgence of class struggle, from the teachers strikes that spread throughout the country earlier this year and threaten to emerge again as the schools reopen over the next several weeks, to the mass opposition among UPS workers to the concessions contracts supported by the Teamsters union, to growing anger among auto workers, Amazon workers and other sections of the working class.

In response, the ruling class—in the United States and internationally—is moving to impose ever more directly authoritarian forms of rule, whether through the promotion of far-right nationalist movements (including forces cultivated by the Trump administration) or in the moves by the traditional parties of the ruling class to abrogate basic democratic rights. In the United States, it is the Democratic Party that has taken the lead in demanding, in the guise of combating “fake news” and “Russian meddling,” greater censorship of the Internet, which is ever more explicitly directed at left-wing, socialist and anti-war publications.

The ruling class has another means of combating and diverting mass opposition to capitalism: the promotion of various pseudo-socialist political movements and individuals that use the term “socialism” to confuse and disorient. In the United States, this role was played in the 2016 election by Bernie Sanders, who spoke of a “political revolution” against the “billionaire class,” only to channel the significant (and, for Sanders, unexpected and unwelcome) support he received behind Hillary Clinton, the candidate of Wall Street and the military and intelligence apparatus.

Over the past year, DSA membership has grown rapidly, from 7,000 in 2016, to 47,000. The organization will likely have two members in the next congress, Alexandria Ocasio-Cortez, who defeated incumbent Congressman Joseph Crowley in a Democratic Party New York congressional primary in June, and Rashida Tlaib, who won last week’s Democratic Party primary in Detroit’s 13th Congressional District (home of longtime Democratic Party/DSA member John Conyers, who resigned last year).

The growth of the DSA reflects two contradictory processes. On the one hand, the leftward movement of a layer of young people looking for a socialist opposition, and, on the other hand, the active promotion of the organization by a faction of the Democratic Party and the corporate media. The DSA-affiliated Jacobin magazine has been exempted from Google’s censorship algorithms targeting the left, while the New York Times has opened its pages to its editor, Bhaskar Sunkara.

The DSA is part of a broader group of organizations, including the International Socialist Organization and Socialist Alternative, that speak for privileged sections of the upper-middle class, not the working class. Their proposals for limited social reforms are connected to support for the Democratic Party and the defense of the organizational domination of the corporatist trade unions over the working class.

The Gallup poll is only the latest indication that there is a massive reservoir of support in the working class and youth for socialism. As workers enter into conflict with the policies of the corporate and financial elite, this reservoir will grow. There is, however, only a limited understanding of what socialism really means and how it can be obtained. As such, it is susceptible to being misguided and suppressed, as the capitalist ruling elites advance their plans for war and dictatorship.

Genuine socialism must be advanced clearly and with great determination. The Socialist Equality Party insists that genuine socialism is based on the principle of social equality, that the vast sums of wealth monopolized by the rich through the exploitation and immiseration of the working class must be seized and directed toward the satisfaction of social needs.

Genuine socialism is international, based on the principle that workers in every country have the same social interests and the same class enemies. A socialist movement must take up the defense of immigrant workers on the basis of the fight for open borders—that workers everywhere should be able to live and work where they choose.

Genuine socialism is inseparable from the fight against imperialist war, the product of the inherent contradictions of the capitalist nation-state system, which threaten to engulf the globe in a nuclear catastrophe.

Genuine socialism is based on the interests of the working class, the vast majority of the world’s population. It is opposed to all forms of nationalism, as well as the politics of racial and gender identity, which seeks to divide workers against each other and subordinate them to the capitalist system.

And genuine socialism is revolutionary. It proposes not mild reforms, which the ruling class will not tolerate, but revolution—the overthrow of capitalist property relations through the establishment of democratic control over the giant banks and corporations. It fights for the political mobilization of the working class, in opposition to the Democratic and Republican Parties, to take power and establish a workers’ government to reorganize economic life, in the United States and internationally, on the basis of social need, not private profit.

ABOUT THE AUTHOR
The author is a senior editor with wsws.org, a Marxian publication.

The Self-Imposed Impotence of the Russian and Chinese Governments

Beyond The DNC -Leaks, Hacks, and Treason

No. What we’ve seen (in the public discussion) is support for a capitalist version of “socialism” that benefits the more fortunate alone, the currently employed, with an unmistakable preference for strengthening and protecting middle class advantages.

Yes, even the Democratic party is now labeled as pro-socialist. The concept of ‘socialism’ is being debased in the service of capitalism.