Home ABOMINATIONS Military Parade Cancelled, How Does Peace Movement Build on This Victory?

Military Parade Cancelled, How Does Peace Movement Build on This Victory?

By Kevin Zeese and Margaret Flowers

This week, the Trump military parade, planned for November 10, was canceled for 2018. In February, a coalition of groups went public, announcing we would organize to stop the military parade and, if it went forward, to mobilize more people at the parade calling for peace and an end to war than supporting militarism. The coalition called for “ending the wars at home and abroad.”

The No Trump Military Parade coalition intended to show the world that the people of the United States do not support war. The coalition has been meeting regularly to build toward organized mass opposition to the proposed parade. People were working to make this protest a take-off for a renewed peace movement in a country exhausted by never-ending wars and massive military spending, but our first goal was to stop the parade from happening. 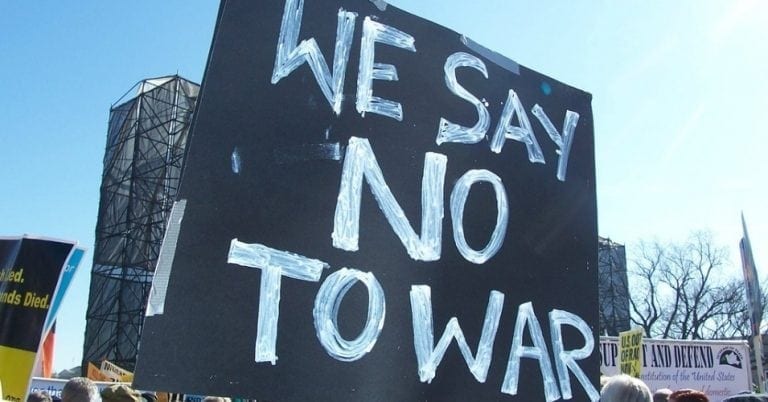 We say No to War sign seen at a 2007 anti-war protest. (Photo by Thiago Santos on flickr)

The protest turned into a weekend of activities linked with the October 21 Women’s March on the Pentagon. The Women’s March was planning to include a daily vigil at the Pentagon until the military parade protest weekend. The theme of the weekend was “Divest from War, Invest in Peace.” On Friday, November 9, we planned a nonviolent direct action training for those who could risk arrest to stop the parade. That evening, CODE PINK was organizing a peace concert, “Peace Rocks”, on the mall. And, throughout that weekend, we were going to participate in Catharsis on the Mall: A Vigil for Healing, where we were going to create art for this Burning Man-like event to demonstrate the transformation of ending war and creating a peace economy.

On November 10, the day of the military parade, the ANSWER Coalition, part of the No Trump Military Parade coalition, had permits for both possible parade routes where peace advocates would hold a concentrated presence and rally alongside the parade. A work group was planning nonviolent direct actions, called “Rain on Trump’s Parade,” to stop the parade. On Sunday, November 11, a group of veterans and military family members were planning to lead a silent march through the war memorials on the mall to reclaim Armistice Day on its 100th anniversary.

The No Trump Military Parade was building momentum. On Tuesday, we published a letter signed by 187 organizations that called for the parade to be stopped. It read, in part, “We urge you now to do all in your power to stop the military parade on November 10. The vast majority of people in the US and around the world crave peace. If the parade goes forward, we will mobilize thousands of people on that day to protest it.” We sent copies of the release to the corporate and independent media and made sure the National Park Service, DC City Council, and Pentagon were aware of our planning.

On Thursday, the Pentagon leaked a new $92 million cost for the parade, more than six times the original estimate.  The cost included $13.5 million for DC police for crowd control and security. This alone was more than the initial $12 million cost estimate for the total parade. DC officials noted the parade would “breed protests and counter-protests, adding to city officials’ logistical headaches.”  Kellyanne Conway also took jabs at protesters when she discussed the cancellation of the parade on FOX and Friends.

Coalition members were quickly alerted to the new cost estimate and people went on social media spreading the word, expressing outrage and sharing our sign-on letter. That afternoon, the coalition issued a statement on the cost and the momentum building to oppose the parade, as  by then, more than 200 organizations had signed on. That evening it was announced that the parade was postponed for 2018 and would be considered in 2019.

There was super-majority opposition to the military parade and it was becoming the national consensus of the country that there should not be a military parade. Army Times conducted a poll of its readers; 51,000 responded and 89 percent opposed the parade responding, “No, It’s a waste of money and troops are too busy.” A Quinnipiac University poll found 61 percent of voters disapprove of the military parade, while only 26 percent support the idea. 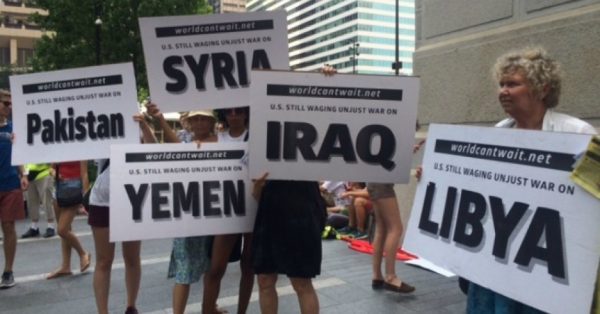 How Do We Build On This Success?

The question members of the coalition are asking themselves now is how to build on the success of stopping the Trump military parade. We started a new Popular Resistance Facebook Group where you can join a conversation about where we go from here. Coalition members are in ongoing dialogue about possible next steps. We share some of those ideas below and would appreciate hearing your views on them.  Some ideas:

These are just some of the conflicts deserving attention. There are of course, more, e.g.cut the outrageous military budget, stop the militarization of space, end the war in Syria, remove troops and bases from Africa, negotiate peace with North Korea, create a detente with Russia, end support for Israeli apartheid, stop the economic wars and threats of militarism against Venezuela and Nicaragua, and deescalate-don’t arm Ukraine. While many groups have their own focus, what can a coalition campaign work together on? 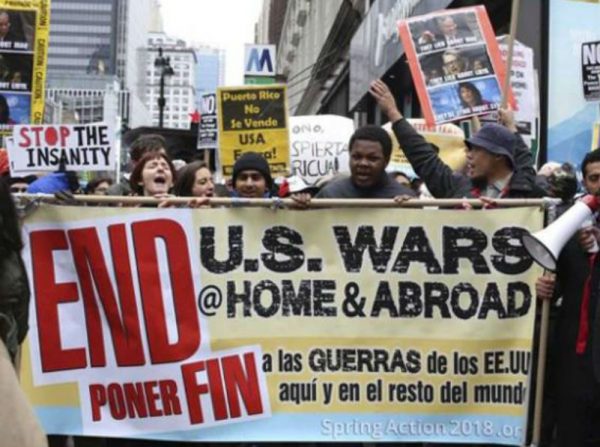 We have been calling this fall the Antiwar Autumn because there is so much going on. Even with the cancellation of the military parade, it is going to be a busy fall.

Some of the major activities that are already scheduled include:

The Veterans for Peace annual conference in Minnesota, August 22-26.

On August 25, the Chicago Committee Against War and Racism is holding a protest against war and police violence on the anniversary of the 1968 protest at the Democratic National Convention against the Vietnam War.

The World Beyond War #NoWar2018 conference in Toronto, Canada on September 21-22 on how to re-design systems to abolish the institution of war.

The October 21 Women’s March on the Pentagon.

The effort to reclaim Armistice Day march on November 11.

The Coalition Against US Foreign Military Bases’ first international conference in Dublin, Ireland on November 16-18, 2018.

Beyond these activities, what can we do to build on the successful organizing around stopping the Trump military parade? We need to celebrate this victory and build on it.

We also want to highlight Class 7 of the Popular Resistance School on How Social Transformation Occurs, which focuses on the infiltration of political movements by the government, big business interests, and other opposition groups. We have written in the past about infiltration, i.e., Infiltration to Disrupt, Divide and Mis-Direct Are Widespread in Occupy and Infiltration of Political Movements is the Norm, Not the Exception in the United States. In this class, we broaden those discussions but also examine how to deal with infiltrators and informants.

ABOUT THE AUTHOR
Kevin Zeese and Margaret Flowers co-direct Popular Resistance where this article was originally published.

Corbyn’s Labour Party is Being Made to Fail –By Design

The Mass Media’s Outrage at Trump: Why the Surprise?