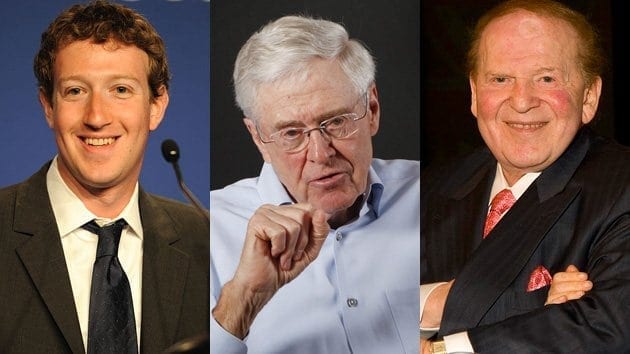 Three notorious billionaires that cast a long shadow on American affairs: Mark Zuckerberg controls Facebook; Koch owns an energy/industrial trust, with terrible influence on climate change, and casino magnate Sheldon Adelson, a fanatical Zionist, makes American policy more pro-Israel than already is. Just about every billionaire has a nefarious influence on the destiny of the US nation and its policies across the globe.

Documentary film maker Marc Levin has a 'must see ' film entitled Class Divide about the gentrification of the West Chelsea area of Manhattan ( 23rd street around 9th and 10th Avenues). HIs former documentary, Hard Times: Lost on Long Island ( 2012) followed four individuals who lost their financial sector white collar jobs after the 2008 Wall Street housing bubble burst. Viewing the film was disheartening, as we watch how devastated people who still believed in the false narrative of The American Dream can become. In Class Divide we learn that the western  part of Chelsea, NYC is the fastest growing real estate sector in the entire city of New York. What was once mostly a low income working stiff neighborhood now hosts high rises and townhouses that cater to the super rich... not even just the 1%, rather the 1/4 of the 1%! Imagine a townhouse across from a Chelsea public housing project that sells for $ 10 million . For real! The sad irony to all this is that in 1937 director William Wyler made a film called Dead End, based on Sidney Kingsley's play of the same name. In the story a high rise apartment building catering to the 1/4 of the 1% of that day was built at the dead end of a really poor neighborhood in Manhattan (perhaps even the same Chelsea area). And they wonder where anger and rage against the super rich can come from. 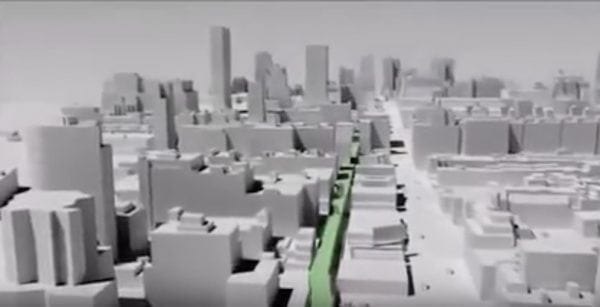 In Levin's Class Divide there is a private school called Avenues : The World School  right in the heart of West Chelsea, a few steps from where very poor people live. The tuition is around $ 40,000 a year... more than three or four times what those in the housing project earn... if they even have a job. In other apartment buildings on that street, the ones that the poor and low income have been living in for generations, landlords are making concerted efforts to get those folks out. There is gold in them there hills! In the spirit of Noblesse Oblige, the school does offer free tuition for low income kids. Let's see , from a student enrollment of 1,200 they allowed 40 such kids in for free... which is around 4%. The rest of the neighborhood kids go to the usually underfunded and underequipped public school nearby. Levin interviewed some of the rich kids who attend the Avenues school, and one can see how naive they  really are concerning income polarization in Amerika. Nice kids who obviously never had to deal with what the poor kids must deal with every day in their apartments. Shades of Wyler's Dead End.

The real sad reality of both of these films is the lack of understanding of how things should be. A nice couple in Dead End, he an unemployed  architect and she a factory worker on strike, assumed that one has to accept the fact that there must be super rich people. Ditto for many of  the poor residents of West Chelsea and the rich kids attending the Avenues school ( none of their parents were interviewed by Levin... one wonders why ). Everyone just sends out the vibes that 'These are the cards we are dealt, and we can only play the hand the best we can.' There are many steps that we working stiffs and unemployed working stiffs must take in order to really ' take back ' our country from the 1/4 of 1 %.*.

The primary step is perhaps to come to the realization that NO ONE should be earning mega millions of dollars each year while the rest of us are one or two or maybe, if lucky, four or five paychecks away from being forced out on the street. We who ' know better ' should teach our young that Socialism is not totalitarianism, or fascism. Rather, it can be a solution to this terrible and deadly income polarization our nation has been operating under.

* The author is correct in pointing that the famous phrase "the 1%" signifying the super rich in America that owns and controls everything (including the entire political class and the media) are far fewer than 1%. In actuality they are way fewer than 1 in 400, as the author suggests, to be precise no more than 0.0001647, or about 560 out of 340 MM inhabitants. This yields a more correct figure, 0.0001647, which is not so easy to memorize as the simpler "1%" but once understood far more powerful. One in a hundred sounds exclusive, but 1 in 100,000 sounds obnoxiously inegalitarian, which it is. Those figures provide an eloquent snapshot of a non-existent democracy.
ABOUT THE AUTHOR
Philip A Farruggio is a son and grandson of Brooklyn, New York, longshoremen. He has been a freelance columnist since 2001, with more than 300 of his essays posted, besides The Greanville Post, on sites like Consortium News, Information Clearing House,  Global Research, Nation of Change, World News Trust, Op-Ed News, Dissident Voice, Counterpunch, Activist Post, Sleuth Journal, Truthout and many others. His blog can be read in full on World News Trust., where he writes a great deal about the need to cut military spending drastically and send the savings back to save our cities. Philip has an internet interview show, "It's the Empire... Stupid" with producer Chuck Gregory, and can be reached at paf1222@bellsouth.net

Robin Williams: Come Inside My Mind: “It’s too late to be sane. Too late.”

Wise words from Mr Farrugio, pointing to the complete victory of the home plutocrats over those who once aspired to building a real democracy in America. The grotesque inequality existing in the US today (and getting worse) negeates all the yada yada we hear constantly from the billionare-owned media.

The primary step is perhaps to come to the realization that NO ONE
should be earning mega millions of dollars each year while the rest of
us are one or two or maybe, if lucky, four or five paychecks away from
being forced out on the street. We who ‘ know better ‘ should teach our
young that Socialism is not totalitarianism, or fascism.
Rather, it can be a solution to this terrible and deadly income
polarization our nation has been operating under.

True egalitarians live a daily insult in America, one economic the other to their intelligence, as all the well-paid shills of the system continue to proclaim the US the best of all possible countries when all facts negate such claims.

I think the most important thing is to focus on blaming Russia and/or Israel for all the evils of the US. After all, why not? Whatever happens, there’s no longer anything we can do about it. Democrats turned to the right and split apart their own voting base, middle class vs. poor, workers vs. their “brothers and sisters” who get phased out of the job market. Liberals/media have remained in high gear to drive away the masses who are not on the right wing, maintaining a solid agenda for… yep, fund raising. Those who are in power today have no fears that People will unite, organize, and push back.