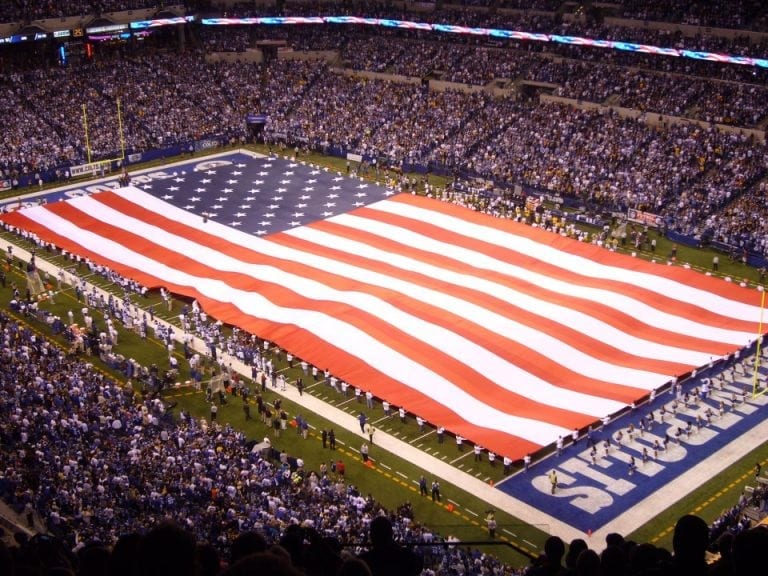 Militarism at the games is not an accident. The NFL billionaire owners are paid for it by the Pentagon. So we are paying to be propagandised.

I love sports, since I was a young kid. I can remember, vividly, sitting in our living room, circa 1960, on a Sunday afternoon watching the N.Y . Giants football game with my Dad and brother. It was late in the game and the Giants called a timeout. Within seconds  the television screen was filled with singer Julie London doing a Marlboro cigarette commercial. As soon as the commercial ended the live shot on the field showed the Giants coming to the line of scrimmage. This all occurred in one minute because timeouts were literally one minute! Sports fans today can testify that timeouts and other breaks in a game reveal a chain of commercials that go on for three to four minutes! Football games in 1960 lasted on average  two and a half hours! My family used to leave our house at 3:45 and go to the movies on Sunday afternoons. Today’s football and baseball games go on for nearly four hours! The networks cram in commercials for every break in the action. Plus, they have the play by play announcers doing commercial spots while the games are going on. They’re in the huddle so let’s push some ad for some show coming up on our network.

I’m a columnist and not an investigative reporter, but I can surmise that regulations have been altered. In the ‘ good ole days ‘ of the 50s, 60s and 70s, at least there were roadblocks to overuse of our airwaves. Whatever the limit on how much airtime slotted each hour for commercials, today the sky’s the limit it seems.  As far as guardians of the public good, as in not allowing cigarette commercials to be shown, well, look what we now have: Excessive pharmaceutical commercials all day and all night! They push so much **** that a human could ingest, and then they ( thank the Lord ) have to mention the side effects, which are horrendous. Yet, it’s a multibillion dollar a year industry this Big Pharma. Just today I was on the treadmill at my local gym, and the television there had limited channels to choose from. So, I went to CNN and was told there would be a story coming on about my right wing congressman running for Governor and possible racist remarks etc. The CNN news host ( journalism school grad with modeling experience?) said they’d be right back… and I counted on my watch one minute, two minutes, three minutes, four plus minutes of commercials! Most insulting, the host comes back on and does an interview with someone else on another story, and not the one that was promised. Well, after less than three minutes they go to another commercial break. Unreal!

Today is the 17th anniversary of the 9/11 Twin Towers and Bldg. 7 false flag scenario. What transpired soon after that horrific event was the marriage between the sports media and the Pentagon. Case in point: before 2009 Pro Football teams stayed in their locker rooms while the National Anthem was played. After the Pentagon threw mega millions at the NFL, we had the weekly honor guards and pomp and circumstance, replete with a giant flag draped over the 100 X 55 yard playing field. Soldiers wearing camouflage were stationed throughout the stadiums as a final touch to this new commercial . You see, we were and are at war… ‘ Perpetual War ‘ as the late, great Gore Vidal named it. As was the case after  WW2 , Korea , Vietnam, Iraq 1 and 2, it was in vogue to have ex military personnel obtain electoral office, to further commercialize war. Nowadays, after 9/11, our soldiers have been relabeled as  ‘ Brave Warriors ‘  and license plates and car signs advertise our branches of the military for all to see. Of course, the last time our nation actually declared war was WW2. Who cares so long as it sells?

[/su_spoiler]
ABOUT THE AUTHOR
Philip A Farruggio is a son and grandson of Brooklyn, New York, longshoremen. He has been a freelance columnist since 2001, with more than 300 of his essays posted, besides The Greanville Post, on sites like Consortium News, Information Clearing House,  Global Research, Nation of Change, World News Trust, Op-Ed News, Dissident Voice, Counterpunch, Activist Post, Sleuth Journal, Truthout and many others. His blog can be read in full on World News Trust., where he writes a great deal about the need to cut military spending drastically and send the savings back to save our cities. Philip has an internet interview show, "It's the Empire... Stupid" with producer Chuck Gregory, and can be reached at paf1222@bellsouth.net
EMERGENCY

Future news flash
” A massive asteroid will hit earth in 24 hours destoying all life on earth,
And now a word from Progressive Insurance co “

Great observations. The only way my family can watch TV sports these days (we can’t afford to go to the local stadium anymore) is to tape the game and fast forward through the incessant commercials