HELP ENLIGHTEN YOUR FELLOWS. BE SURE TO PASS THIS ON. SURVIVAL DEPENDS ON IT.
PATRICE GREANVILLE 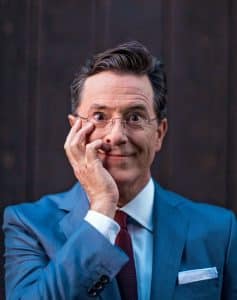 Stephen Colbert and the recently dethroned Les Moonves typify the

hypocrisy of hardcore centrist liberals. These are the folks that talk incessantly of morality, doing the right thing, are wedded to identity politics and racialism, but when push comes to shove, money and power always talk louder. Colbert made his reputation as a smirking, petulant subsidiary for Jon Stewart, cultivating the image of an enfant terrible, speaking truth to power, yada yada. Later, as inheritor to the uber profitable Late Night Show franchise once presided by Johnny Carson, the man instantly became an apologetic CIA-asskissing, Democrat Russiagater and fervent neoliberal. There was no decent gradual transformation; the conversion was quicker than a cafe espresso. One has to wonder whether these liberals ever have any real principles, or backbone for that matter. So it was certainly no surprise that when his boss of bosses, the man behind the screen so to speak, zillionaire Les Moonves, chief honcho at CBS, was amply and irrefutably accused of playing with the dolls without their consent, Colbert was not about to cheerlead the #metoo parade. That much, as the Vegas handicappers might say, was a foregone conclusion. To add insult to injury, the cowardly, and completely prostituted board of directors of CBS (CEOs are known to stuff the board of corporations with their hand-picked flacks) fumbled uncomfortably with the women's complaints and finally decided to ask for Moonves resignation—but not before doling out a vomitively huge $100 MM consolation package.  That's what passes for punitive justice in corporate America. In the video below, Jimmy Dore zeroes in on this disgrace, with his usual clarity, bravura and eloquence. Go for it. —PG

ABOUT THE JIMMY DORE SHOW: The Jimmy Dore Show is a hilarious and irreverent take on news, politics and culture featuring Jimmy Dore, a professional stand up comedian, author and podcaster. With over 5 million downloads on iTunes, the show is also broadcast on KPFK stations throughout the country. It is part of the Young Turks Network-- the largest online news show in the world.

Rachel Maddow Has Lost Her Mind & People Are Noticing