The baloney of Sean Patrick Maloney 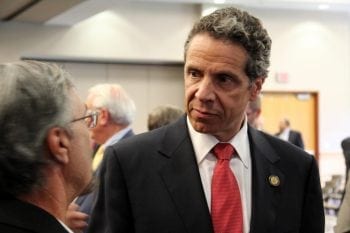 Cuomo: Running for president, let no one be confused. For him, too, Trump is all that is worng with the world.

As might be expected from a state where politics is often (depending on how you look at it) taken more seriously or more cynically than in other parts of America, the New York Democrat primary is shaping up to be one for the history books. For one, machine politician and transparent hypocrite Andrew Cuomo, the sitting governor, has spent a bazillion dollars promoting himself as the dragonslayer in regard to the Trumpian menace, and (don’t they all claim the same?) as the obvious coice for the coveted title of  “man of the people”.  Oh, and he’s also defending “New York’s values”, whatever that is. I presume it means some form of vague progressivism, to differentiate chauvinist New Yorkers from the supposed Yahoos inhabiting the old confederacy. In any case, given the ubiquitousness of Cuomo’s ads, one has to wonder where all those millions came to pay for this advertising barrage.  The kicker is that this is just a platform for Cuomo’s real ambition, to win the party’s presidential nomination in 2020, a fact he naturally vehemently denies, but which you have to be a card-carrying sucker to swallow. Improbably, Cuomo, who has had a hard time concealing his irritation, is facing the challenge of a classical upstart, upscale Cynthia Nixon, a former lesbian star of the popular franchise Sex in the City. One would imagine that Nixon, being an actress, would have had an easy time with the only debate Cuomo sneeringly consented to, but, alas, even thespians, who lie professionally, proved an amateur compared to the guv’nor, becoming at times incoherent and clearly flustered by Cuomo, clearly not an auspicious showing for a person already weighted down by a huge lead and the constant refrain that “she lacks experience”. I’m not particularly blown away by Nixon’s counter-establishment fides, but it must be admited that that is a laughable charge when we consider who this nation has elected to the top office in the last 20 years.

In any case, the reason for this entry is the candidacy of Sean Patrick Maloney, who, even better than Cuomo, typifies the young and hungry up-and-coming New Democrats. Maloney—who is gay and happily married—and apparently admires Bill Clinton (or thinks the association is good for his career), has a relatively progressive track record, but one, as critiqued below, scrupulously bounded by the corporate establishment’s orthodoxy. Maloney has totally embraced the ighly toxic Russiagate hoax, in itself a poor reference on his smarts or his character. His position on the NRA, identity politics and other issues by which current liberals seek to define themselves mean practically zilch when it comes to any of the real tough issues facing New Yorkers, Americans and people in general around the world, yea, minor things like the looming prospect of a nuclear war and the implosion of the last remnants of democracy. While affluent liberals pat themselves on the back for their inherent goodness and lack of prejudices, people’s lives by the hunreds of millions are being affected in dramatic ways, destroyed by the rapidly advancing neoliberal model, with its outrageous inequality and endless wars, not to mention the utter disregard and destruction of the only environment this fragile planet has or will ever have under human management. So here’s our critique for Maloney and his kind, delivered in the form of (a) an ad from Maloney; (b) a critique of Maloney’s ad; (c) a corroborating opinion by Jimmy Dore, expressing precisely our feelings, that the Democrats’ obsession with Trump’s Russia collusion and his endless list of sins, is as much an act of hypocrisy and a red herring, as it is groundless, for no serious evidence has ever been presented of some national security breach. ALL that can be thrown at Trump to date is what Washington is already replete with: business-induced corruption and chicanery, and the rule of an ilegitimate plutocracy, with prostituted politicians and media fronting for it. If Maloney is the exception or thinks he can make a difference, we’d like to know how. 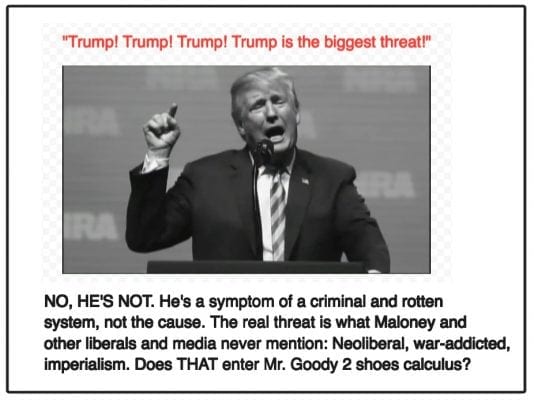 Sorry, but the reason we have Trump is because of Pro-War Corporate Democrats in bed with Wall St. & management like Rahm. These people represent & defend Oligarchy. They are not #TheResistance but #TheAssistance https://t.co/eXYjuFgxkE

And here’s Jimmy, explaining this important, super-critical point in more detail, the point that completely contradicts Maloney’s and his ilk’s claim that Trump is “our biggest threat.”
Q.E.D.

ABOUT THE AUTHOR
T.H. Rejerts is a Canadian expat residing in Stamford, CT.

Iran detente after Trump’s JCPOA pull out? We can wait 2 more years, or 6, or…