Overheard at the Fat Cats Club 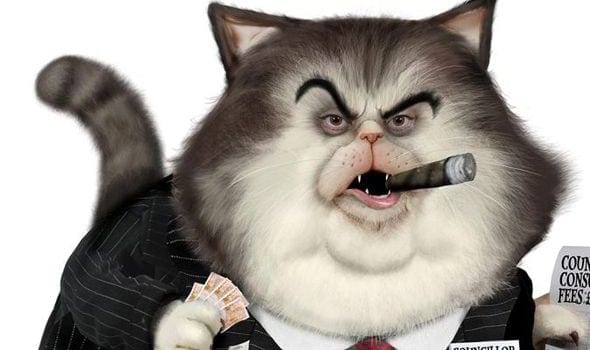 Being a ' fly on the wall ' is not such a bad thing... unless of course you get swatted.  Listen to what this fly overheard at the Fat Cats Private Club the other day:

Fat Cat # 2 - Yes, it was brilliant of those of us who allowed Trump to get the Republican nod.

#1-  Funny how when things go right they can accomplish so much. A) We got him to select our people to run his administration; B) Like a dedicated 'Pied Piper' Donald had millions of those blue collar and white collar white faces to follow him... and guess what, the majority of them still do!

# 2 - ( Laughing) They don't care that they're getting screwed in spades, so long as he pumps them up with his rhetoric of ' The Wall ' and ' Ragheads out' and ' Drain the swamp'. Magnifico!

# 1 - And, the icing on the cake is this whole Russia and ' Putin is Hitler' crap. It just makes Donald a most sympathetic character. We don't even have to use our guys in the media to go to work on counteracting things. The Democrats are doing our work for us.

#2- Plus the fact that all this is opening it up for our agenda to really amp of the military spending even more...

#1- ( interrupting him) Defense spending. Always use ' Defense spending' and not the other term. That way we get the natives to wave the flag and salute our ' Brave warriors' .

#2-  Sorry. I just wonder how far can we go with this increased spending. I mean it's already over 50% of their tax money, isn't it?

# 1- Are you kidding me!? We have the best of allies in this endeavor... The Democrats! They go all in for these requests, and all of that flag waving crap. Look at how they reacted to McCain's death. They made him into an icon for goodness sakes! I mean, honestly, the guy couldn't even fly a fighter jet properly, and remember how we had to bail him out during that whole Keating banking scandal?

#2 - Yeah, you really have to give it to those Democrats. They always seem to come around to our big issues. Look at Obama. The guy massaged the natives right into the White House, and then what; He continued to give away the store to our Wall Street friends...

#1- And then the military spe... oh sorry, even I do it too... the defense spending actually increased under him.

#2- So much has been accomplished by our people. This Russia thing has allowed Donald to put through every agenda we push in his face. The suckers don't even know what's hitting them ( laughing ) .

# 2 - The companies my group owns just love the fact that we don't have to worry about unions at all. We just need to get more states to push through ' Right to Work' to really kneecap the whole union movement...

#1- And don't forget that our people own most of the major unions anyhow. A little perk here and there and those union leaders bend and scrape for us.

# 2- I mean, look at that whole ' Public Option ' crap that the Democrats tried to push through in ' 09. Obama did have us in a corner on that one if he went ahead full speed.

# 1 Of course he didn't, and neither did most of his party and most of the union leadership. We got them to acquiesce and keep our insurance companies and health care industry on top of that one. I mean, look at Medicare now. We have our private insurers running things anyway.

#2 - What the suckers out there forget is that in '08 McCain got a little over $ 7 million from our health care industry while Obama received over $ 21 million in campaign donations. You think he was really going to go ahead with his ' Hope and Change' ?

# 1 - The same with the Wall Street bailout Part 2. We had Henry Paulson as our front man on Part 1. How many of the suckers out there realized that good ole Henry had just retired as CEO of Goldman Sachs at a compensation of $ 500 million? He did his best acting job to insure that Bush and Cheney got their bailout through pretty easily.

#2 - I loved it when Nancy Pelosi stood with him in front of the media and gave her support for it. Of course, with Obama in office in '09, we did need one of our guys, Rahm Emanuel, his new chief of staff, to make sure Part 2 breezed through.

#1- Just remember who Obama's main economic advisor was in '08 when he ran. None other than our guy Larry Summers, the guy who got Bill Clinton to push for the repeal of Glass-Steagall .

# 2- That opened the door for our people to empty out the henhouse  ( laughing ) and really fortify the Subprime agenda. I tell you, I personally made mega millions on that one. Imagine, that law was on the books for over 66 years until Summers and company got it repealed in 1999.

# 2- We have a lot to be thankful for my friend... from both of our friends on both sides of the aisle. Now, we just have to keep it going for a little longer. I mean, with the new Chinese empire on the horizon, you know this is not going to last too long.

#2- We need to find a nice safe country to relocate to, and count our gold.  You have begun to convert into gold I hope?

Be Careful What You Ask For: Wasting Time with Manafort, Cohen, and Russiagate