By Jochen Hellbeck
(With our thanks to Prof. Grover Furr, for his guidance.)

[dropcap]E[/dropcap]ach year on May 9, Russian Victory Day, surviving veterans of the 62nd Army gather at the Vassily Chuikov Primary School in northeast Moscow. At the school, named after their army commander, who defeated the Germans at Stalingrad, they listen to poems composed by schoolchildren in their honor. They tour the building’s small war museum before sitting down for a celebratory lunch in the festively decorated veterans’ room. As they toast each other with vodka or juice, they shake their heads at the destruction and losses inflicted by the war, and grow tearful remembering the dead. More toasts follow, and before long the group is carried away singing songs from the war, the sonorous baritone of Colonel General Anatoly Merezhko taking the lead. Behind the long table is an enormous poster rendition of the Berlin Reichstag in flames. After routing the Germans at Stalingrad, the 62nd Army (renamed Eighth Guards Army) marched west, through Ukraine, Belarus, and Poland, to conquer Berlin. One veteran in the room proudly points out that he inscribed his name on the walls of the German parliament building in 1945.

One Saturday each November, a group of German Stalingrad veterans travels to the town of Limburg, forty miles from Frankfurt. In an austere room of the civic center, they convene to remember their departed wartime comrades and take stock of their thinning ranks. Their reminiscences, over coffee, cake, and beer, last well into the evening. The next morning, Totensonntag, the National Day of Mourning, the veterans visit the local cemetery, where they congregate around an altar-shaped rock bearing the inscription “Stalingrad 1943.” A wreath lies on the ground, bedecked with the flags of the 22 German divisions destroyed by the Red Army between November 1942 and February 1943. Town officials hold speeches denouncing past and present wars. A reserve unit of the German army provides a guard of honor while a solo trombone player intones the sorrowful melody of the traditional German military song, “Ich hatt’ einen Kameraden” (I had a comrade).

[dropcap]F[/dropcap]ought over a duration of six months, the battle of Stalingrad marked a tidal shift in the war. Both the Nazi German and the Stalinist regimes went to extremes to force the capture, or defense, of the city that bore Stalin’s name. Amidst such intense mobilization on both sides of the front, how did enemy soldiers make sense of the war? What animated them to fight, and to fight on against formidable military odds? How did their views of themselves and the enemy evolve during this critical moment in world history? Shunning soldiers’ memoirs, because they examine war through the distorted lens of hindsight, I am instead drawn to documents from the time of the battle – military orders and propaganda leaflets, personal diaries, letters and drawings, photographs and film reels – which bear the direct imprint of the intense emotions – love, hatred, and rage – unleashed in wartime communities. State archives house few personal records from the war, and so my search for these documents led me to the reunions of German and Russian Stalingraders, and from there to the doorsteps of their homes. 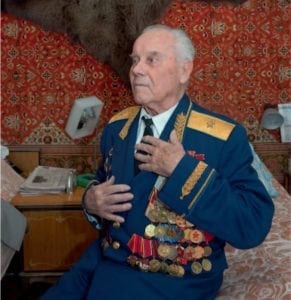 The veterans willingly shared their letters and photo collections from the war, but our personal encounters made me aware of something I had initially overlooked: the enduring presence of the war in their lives, and the strikingly different ways in which Germans and Russians engage with war memories. The battle may lie almost seventy years in the past, yet traces of it are powerfully etched into the bodies, thoughts, and feelings of its survivors. I discovered a domain of the war experience that no archive could reveal. This experience pervades the veterans’ homes: it whispers through the pictures and artifacts from the war that hang on walls or are safely stowed away; it holds itself in the straight backs and courteous manners of former officers; it flares up in the scarred faces and limbs of wounded soldiers; and it lives on in the veterans’ simple gestures of sorrow and joy, pride and shame.

To fully capture the war’s complex, enduring presence required a camera in addition to a tape recorder, and my accomplished photographer friend, Emma Dodge Hanson, kindly accompanied me on my visits. In the short span of two weeks, Emma and I traveled to Moscow and a range of cities, towns, and villages in Germany, where we met nearly twenty veterans in their homes. Emma has a singular ability to record people when they are at ease with themselves, nearly oblivious to the photographer’s presence. Shot with natural light whenever possible, the pictures capture the gleam reflected in the subjects’ eyes. The richly nuanced images bring out the fine wrinkles and furrows that grow deeper as the veterans laugh, cry, or mourn. Studied together, the hours of taped testimony and the stream of photographs we captured portray the veterans residing in their recollections, as real to them as the furniture surrounding them.

Appendix
Much has been said about Stalin’s supposedly boundless desire for adulation and his (equally putative efforts) to build a cult of personality around him. This letter, recently unearthed, from 1925 gives the lie to such assertions. Fact is, all systems of power, including so-called democracies, create circles of sycophants around the top leaders.

Stalin did not want to change Tsaritsyn to Stalingrad (1925).docx

“I have learned that some people want Tsaritsyn to be renamed Stalingrad. I have also learned that Minin is seeking to have it renamed Miningrad. I also know that you have postponed the congress of soviets because of my absence, and you are thinking of performing the renaming procedure in my presence. All this creates an awkward situation for you, and especially for me. I beg you to keep in mind that:
1) I did not seek and do not seek the renaming of Tsaritsyn to Stalingrad;
2) This matter was begun without me and apart from me;
3) If it is necessary to rename Tsaritsyn, call it Miningrad or something else;
4) If you’ve made too much noise about Stalingrad and now it’s difficult for you to abandon the case, do not drag me into this business and do not demand my presence at the congress of soviets, otherwise you may get the impression that I am seeking the renaming;
5) Believe me, comrade, that I do not seek either fame, or honor, and would not want the opposite impression to be created.

With communist greetings
I. Stalin