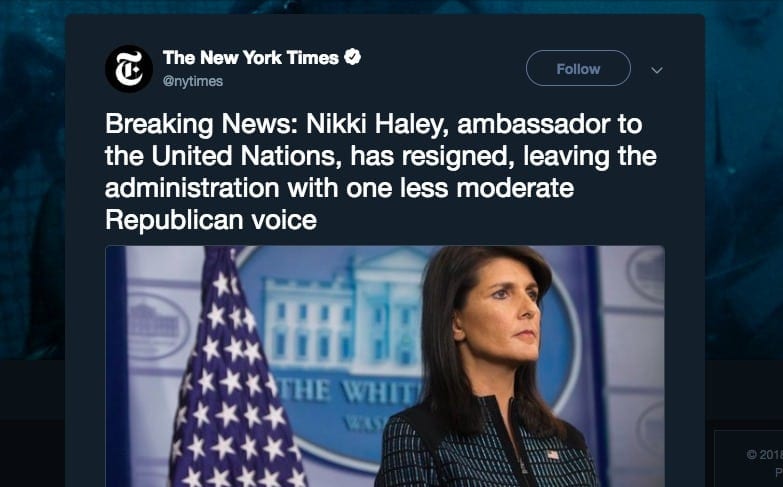 World War Three proponent and US Ambassador to the UN Nikki Haley has announced her resignation today, to the dismay of establishment bootlickers everywhere.

“Nikki Haley, ambassador to the United Nations, has resigned, leaving the administration with one less moderate Republican voice,” tweeted the New York Times, without defining what specifically is “moderate” about relentlessly pushing for war and starvation sanctions at every opportunity and adamantly defending the slaughter of unarmed Palestinian protesters with sniper fire.

“Too bad Nikki Haley has resigned,” tweeted law professor turned deranged Russia conspiracy theorist Laurence Tribe. “She was one of the last members of Trumplandia with even a smidgen of decency.”

“Thank you @nikkihaley for your remarkable service. We look forward to welcoming you back to public service as President of the United States,” tweeted Mark Dubowitz, Chief Executive of the neoconservative think tank/covert Israeli war psyop firm Foundation for Defense of Democracies.

“Thank you @nikkihaley for your service in the @UN and unwavering support for Israel and the truth,” tweeted the fucking IDF. “The soldiers of the Israel Defense Forces salute you!”

Prime Minister Benjamin Netanyahu:
"I would like to thank Ambassador @nikkihaley, who led the uncompromising struggle against hypocrisy at the UN, and on behalf of the truth and justice of our country. Best of luck!" pic.twitter.com/Lr6IvkM5U9

[dropcap]I[/dropcap]’m not going to go over every single fawning, sycophantic tweet, but if you ever ingest poison and can’t afford to go to the hospital because of America’s disastrous healthcare system, you can always try going to Haley’s Twitter page and looking at all the empire loyalists she’s been retweeting who’ve been falling all over themselves to paint her as something other than the bloodthirsty psychopath that she is. If that doesn’t empty your stomach contents all over your screen, you are made of stronger stuff than I.

Describing Nikki Haley as a “moderate Republican” is like describing Jeffrey Dahmer as “a moderate meat eater”. Besides John Bolton there is nobody within the depraved Trump administration who’s been a more reliable advocate for war, oppression and American/Israeli supremacism, no more virulent a proponent of the empire’s photogenic version of fascism than she. Whether it’s been blocking any condemnation of or UN investigation into the slaughter of unarmed Palestinian protesters via sniper fire, calling for a coalition against Syria and its allies to prevent them from fighting western-backed terrorist factions, outright lying about Iran to advance this administration’s regime change agenda in that nation, her attempts to blame Iran for Saudi Arabia’s butchery of Yemeni civilians with the help of the US and UK, her calls for sanctions against Russia even beyond those this administration has been willing to implement, her warmongering against North Korea, and many, many examples from a list far too long to get into here, Haley has made death and destruction her life’s mission every day of her gore-spattered tenure.

But because she only advocates establishment-sanctioned mass murders (and perhaps partly because she wears the magical “Woman of Color” tiara), Haley can be painted as a sane, sensible adult-in-the-room by empire lackeys who are paid to normalize the brutality of the ruling class. While you still see Steve Bannon routinely decried as a monster despite his being absent from the Trump administration for over a year, far more dangerous and far more powerful ghouls are treated with respect and reverence because they know what to say in polite company and never smoked cigars with Milo Yiannopoulos. All it takes to be regarded as a decent person by establishment punditry is the willingness to avoid offending people; do that and you can murder as many children with explosives and butterfly bullets as your withered heart desires.

Haley will be departing with a disgusting 75 percent approval rating with Republicans and 55 percent approval with Democrats, because God is dead and everything is stupid. It is unknown who will replace her once she vacates her position (I’ve got my money on Reaper drone in a desk chair), but it’s a safe bet that it will be someone who espouses the same neoconservative imperialist foreign policy that this administration has been elevating since the beginning. Whoever it is should be watched closely, as should the bipartisan beltway propagandists whose job it is to humanize them.

UPDATE: Had to include this galaxy-brained hot take from the New York Times editorial board:

This says everything about the NY Times editorial board and its priorities. The NYT says Nikki Haley was "a pragmatic envoy," "constructive," and "can exit the administration with her dignity largely intact." It even demands "a replacement in her mold." https://t.co/GjBmi4sFjv

Thanks for reading! The best way to get around the internet censors and make sure you see the stuff I publish is to subscribe to the mailing list for my website, which will get you an email notification for everything I publish. My articles are entirely reader-supported, so if you enjoyed this piece please consider sharing it around, liking me on Facebook, following my antics on Twitter, checking out my podcast, throwing some money into my hat on Patreon or Paypal,buying my new book Rogue Nation: Psychonautical Adventures With Caitlin Johnstone, or my previous book Woke: A Field Guide for Utopia Preppers.

The complicity of the New York Times and its top editors in the crimes of the US empire and its affiliates and vassals requires little further proof, as they provide that themselves every single day, this revolting mourning over Nikki Haley’s departure from the UNO post but the latest example. The NYTimes behaviour is simply normal and to be expected for the US and Western media. Under such circumstances, we suggest you open a folder in your computer and call it Nuremberg Tribunal Media Dossier. Then accumulate there evidence that one day might serve to convict these monstrous hypocrites of the worst crimes defined by the Nuremberg Tribunal statutes. Start by downloading this item from the New York Times, signed by that paper’s editorial board:

Nikki Haley Will Be Missed

López Obrador in Mexico: Meet the New Boss, Same as the Old?

“Haley will be departing with a disgusting 75 percent approval rating with Republicans and 55 percent approval with Democrats” – Could our nation possibly become more amoral and bloodthirsty than it is today? No doubt Nikki has a bright future in the endless war and mayhem business. She will likely go far – much to the detriment of all humanity.

The Haley ratings by the duopoly wings confirm their baktruptcy as oppositional parties, not to mention their own abject amorality. This alone should disqualify them to sit in Congress, if not file charges against them for spporting unconstitutional behaviour in ahigh public official.

Haley is a smart politician, she knows when to get out when the going is good. Between Kavanaugh and the midterm elections she avoids being stained by the #metoo movement and now everything is geared towards getting Trump out (Fed increasing rates and repressing the stock market etc.), she avoids getting caught in the trap.

While the country slips ever faster and deeper into a fascistic mode (vide the talk about ‘justified’ US aggressions on the Morning Joe television program), the Trump circus does not fail to amaze. His kicking against every form of the petty-bourgeois attitudes is refreshing if not downright revolutionary. No wonder that the heavily established powers hate him and equally the upper-middle yuppy classes, so-called intellectuals included. US exceptionalism is falling apart and with it the very hypocritical make-believes of gentility in this hard-nosed very commercial society. The capitalist system of every human for him/herself is dissolving into a competitive squabbling… Read more »