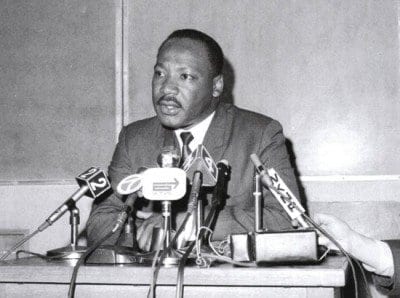 The late Martin Luther King Jr. gave a stirring speech on August 31st 1967, and it (sadly) rings true today. In his comprehensive look at what ails not only America but most of the western world, King focused on this salient point:

“But I suggest that we are now experiencing the coming to the surface of a triple prong sickness that has been lurking within our body politic from its very beginning. That is the sickness of the evils of racism, excessive materialism and militarism.”

Fifty plus years later and it is worse now than then on many fronts.

Why is it that so many low and middle income white people follow Trump like the Pied Piper?

Yes, one of the leading polled reasons they give is the need for more jobs here at home and not offshore. Trump sold them on that one even though most of the jobs he helped deliver are simply dead end ones.

Another polled reason is the disdain by many for Big Government and the ‘entitlements’ (AKA Welfare) given out to many at the expense of those who cherish the work ethic. Translated: Stop giving free rides to the niggers and spics!

Other polling reveals how those who support Trump and his party are fearful of terrorism (You know, the old PR move by the Bush/Cheney gang to ‘Fight them there so they don’t come here’).

Thus, the more money spent on a strong military the better, even if it means these low and middle income white Trump supporters will have even less of a safety net. ‘Well’ , they figure, ‘What I can’t get  in the way of government aid the niggers and spics won’t get either!’ Such is how this covert racism shows its ugly head. Of course, for generations many white Americans continue to vote for Republicans because the Republicans will do their best to ‘Keep the niggers and spics away from my neighborhood!’

Plain and simple. Remember, the worst and most threatening situation facing Dr. King was when he led a march for fair housing in Chicago. He could not believe how violent the white ‘working stiff’ mob there could be.

On the subject of excessive materialism, just channel surf a bit and see how consumed we are as a culture for Things. Junior Bush said it best right after 9/11 by telling Americans to ‘Shop’. The real sin is how so many people I know have bought into this whole celebration of the super rich and the dream of ‘investment wealth’. So many middle income folks want to become Absentee Landlords, earning money off of other people’s need for a place to live. On the subject of self centeredness, go to any public place (like my local health club) and see the abundance of electronic gadgets, and people walking around with wires coming out of their ears.

During my baby boomer youth and middle age, people used to actually speak to one another at the gym. With these gadgets no one even speaks to others via their phones anymore – they text! As a man who makes his living via the telephone, speaking to small businesses nationwide, the verbal skills of America’s youth are not so great… and getting worse. As far as ‘enriching oneself intellectually’, librarians tell me that many more movie DVDs are borrowed than books, by a wide margin. Remember the Peter Sellers character in the film Being There, who was mentally challenged, when asked about what he likes, answering ‘I like to watch’?

Dr. King knew that by 1967 extreme militarism was running rampant. Then finally, he began to see the upsurge of  dissent to this insanity finally growing each and every day. This was especially aided by the evening news covering daily the death and destruction of and by our military in Vietnam.

A few months previous to his August 31st speech, King gave a historically stirring one at The Riverside Church .The most famous line from this April 4th speech was when he called our country ‘The Greatest Purveyor of Violence in the world’. He then was able to do something, which today’s Democrat and of course Republican political leaders and embedded media refuse to do; that being to connect the massive funding for militarism against  the needs for more money for our safety net and other vital considerations.

Sounds familiar, right? Wouldn’t it be natural for most working stiff Americans to understand how increased spending on militarism at the expense of their needs was not economically healthy?  Well, in 1967 America the real ‘Deep State’, with help from that same embedded mainstream media, played the Cold War Commie Threat card so effectively. We know that after 9/11 the real ‘Deep State’ continues to play the terrorist fear card so well. Talk about a ‘Me Too’ movement. We have both political parties using it continuously, always parroted by the good ole prostitute media.

“All tyranny needs to gain a foothold is for people of good conscience to do nothing.” — Thomas Jefferson

Militarization of Arctic: Issue of Incredible Importance Not Given Due Attention to

The Elephant ( and Jackass ) in the Room