On Saturday, US President Donald Trump announced that the United States will withdraw from the Intermediate-Range Nuclear Forces (INF) treaty, which prohibited Washington and Moscow from developing short- and medium-range missiles. 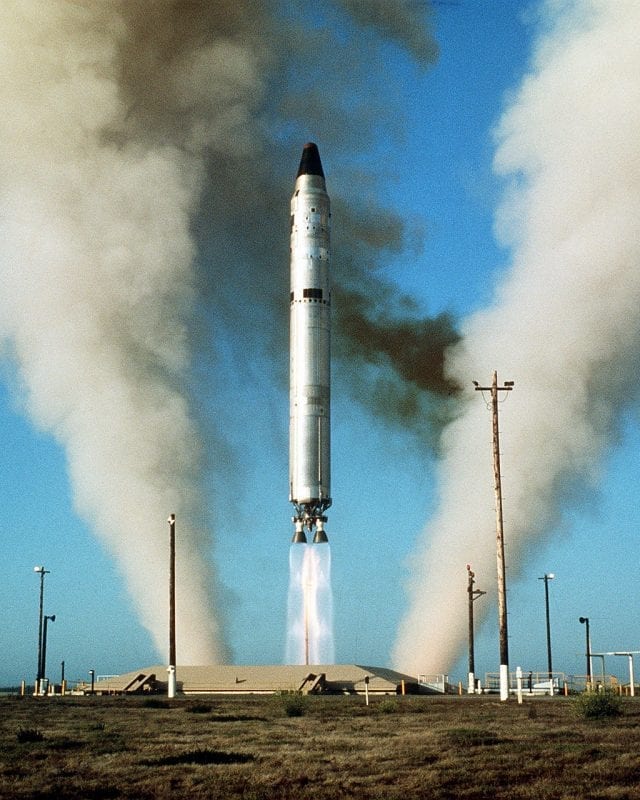 It is difficult to overstate the criminality and recklessness of this action. The lives of billions of people in Europe and East Asia have been deliberately placed in the crossfire of Washington’s nuclear buildup against Beijing and Moscow.

American military planners are intent on not only building, but using, nuclear weapons in combat. They aim to demonstrate to their potential adversaries that no humanitarian or moral constraints exist for them, and that Washington out-does its rivals not just in weapons, but in bloodlust.

These plans are being laid in secret. The New York Times has treated the US withdrawal from the treaty as a non-issue. It was not even front-page news, and the newspaper published no editorial or columns about it. Nor was it discussed on the Sunday talk shows.

The Democrats have been almost entirely silent on the consequences, and the danger of global war—or any opposition to war—has been excluded as an issue from the 2018 midterm elections, just two weeks away.

In the foreign policy press and the publications of think tanks, however, nuclear war is a preeminent issue. Even before the White House’s announcement, Foreign Affairs dedicated its current issue to a discussion of nuclear war, with its cover featuring a missile launch.

The issue features a column by Elbridge A. Colby, one of the principal authors of the National Defense Strategy published by the Pentagon in January, which proclaimed the effective end of the “war on terror” and the beginning of “great-power competition.”

Colby, the former deputy assistant secretary for strategy and force development, titled his article, “If You Want Peace, Prepare for Nuclear War.” He writes: “The risks of nuclear brinkmanship may be enormous, but so is the payoff from gaining a nuclear advantage over an opponent.”

“Any future confrontation with Russia or China could go nuclear,” Colby warns. “In a harder-fought, more uncertain struggle, each combatant may be tempted to reach for the nuclear saber to up the ante and test the other side’s resolve, or even just to keep fighting.”

A sane person would see this as an argument for the abolition of nuclear weapons. But in the minds of the Pentagon’s professional killers, it speaks to the urgent need to build and use such weapons.

“The best way to avoid a nuclear war,” Colby writes, “is to be ready to fight a limited one.” In this dangerous world, “US officials,” Colby writes, must demonstrate that "the United States is prepared to conduct limited, effective nuclear operations.”

In other words, Mr. Colby is advocating the use of nuclear weapons in combat, not as a doomsday scenario, but in an escalation of a conventional military conflict, whether in the Baltics against Russia, or in the Eastern Pacific against China.

There is an insanity to such arguments, but it is an insanity that has an objective basis. The capitalist world order, choking on the insoluble conflict between the nation-state and the global economy, is leading mankind toward a catastrophe. 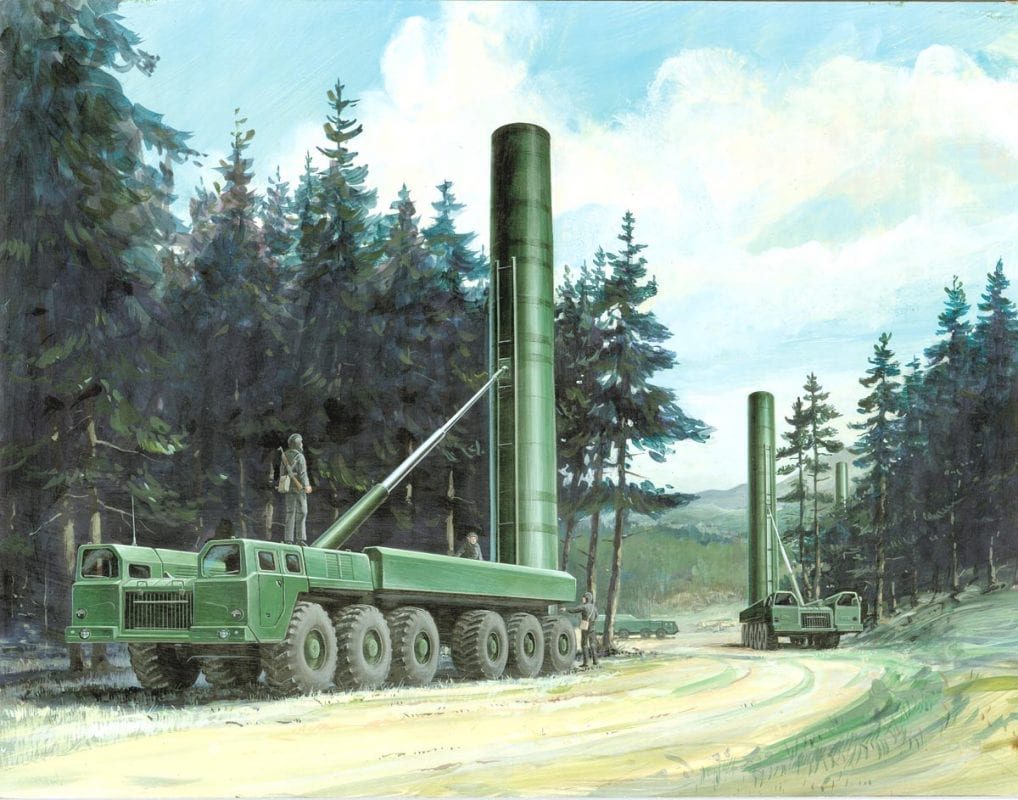 The Soviets deployed hundreds of mobile, SS-20 intermediate force missile launchers in the 1980s--with three nuclear warheads on each missile and reloads for each launcher. These were targeted against Western Europe, China, and Japan. The highly accurate SS-20 had great mobility when field deployed to ensure survivability.  (Info by US Dept. of War)

While the INF treaty is with Russia, a major calculation behind the Trump administration’s withdrawal from it relates to the growing conflict with China. In an article hailing the decision, the National Interest called the move “China’s New Nightmare.” Washington, the journal wrote, risks “becoming significantly ‘out sticked’ in the ongoing ‘range war’ between military systems designed to safely control the increasingly unfriendly seas and skies of the Western Pacific.”

“US withdrawal from INF, however, could help reverse this dynamic,” it states, adding, “New American conventional systems… could be stationed in unsinkable, out-of-the-way locales” such as Japan, the Philippines and Australia.

But while these countries are “unsinkable,” they are home to hundreds of millions of people. The populations living near such missile bases will be told, of course, that nuclear war is unlikely, even as policymakers, in secret documents, plan out exactly how many millions will die.

The driver of Washington’s nuclear brinkmanship is the protracted decline of the global economic power of the United States relative to its rivals, principally China. But this process has entered an acute phase in recent years, with a concerted effort on the part of the Chinese ruling elite to promote the country’s high-value manufacturing and high-tech sector.

In a speech announcing a new military and economic escalation against China earlier this month, US Vice President Mike Pence demanded that China cease its efforts to control what he called the “commanding heights of the 21st century economy,” including “robotics, biotechnology, and artificial intelligence,” making it clear that under the Trump administration, the United States is “defending our interests with renewed American strength.”

The active preparations for nuclear war, which would be a total war complete with a police-state crackdown on all political opposition, are being made behind the back of the public, which overwhelmingly opposes it.

Far from opposing the military build-up, the Democrats have focused their criticism of Trump for the past two years on claims that he is insufficiently aggressive against Russia, which has been used as the pretext for imposing a regime of internet censorship aimed at silencing domestic opposition.

Only the working class can stop this insane policy. The International Committee of the Fourth International reaffirms the critical principles it advanced in February 2016, in its statement, “Socialism and the Fight Against War”:

• The struggle against war must be based on the working class, the great revolutionary force in society, uniting behind it all progressive elements of the population.

• The new anti-war movement must be anti-capitalist and socialist, since there can be no serious struggle against war except in the fight to end the dictatorship of finance capital and put an end to the economic system that is the fundamental cause of militarism and war.

• The new anti-war movement must therefore, of necessity, be completely and unequivocally independent of, and hostile to, all political parties and organizations of the capitalist class.

• The new anti-war movement must, above all, be international, mobilizing the vast power of the working class in a unified global struggle against imperialism. The permanent war of the bourgeoisie must be answered with the perspective of permanent revolution by the working class, the strategic goal of which is the abolition of the nation-state system and the establishment of a world socialist federation. This will make possible the rational, planned development of global resources and, on this basis, the eradication of poverty and the raising of human culture to new heights.

ABOUT THE AUTHOR
Andre Damon is a senior analyst with wsws.org, a Marxian publication affiliated with the the International Committee of the Fourth International (a Trotkyist organization).  The Greanville Post, though socialist and a user of Marxian historical analysis, is not affiliated with any Marxian party of faction. including Trotskyist tendencies or groups.

Khashoggi Wasn’t the Only Murder Victim of Mohammed bin Salman