Home ABOMINATIONS How the World Sees the Caravan

How the World Sees the Caravan 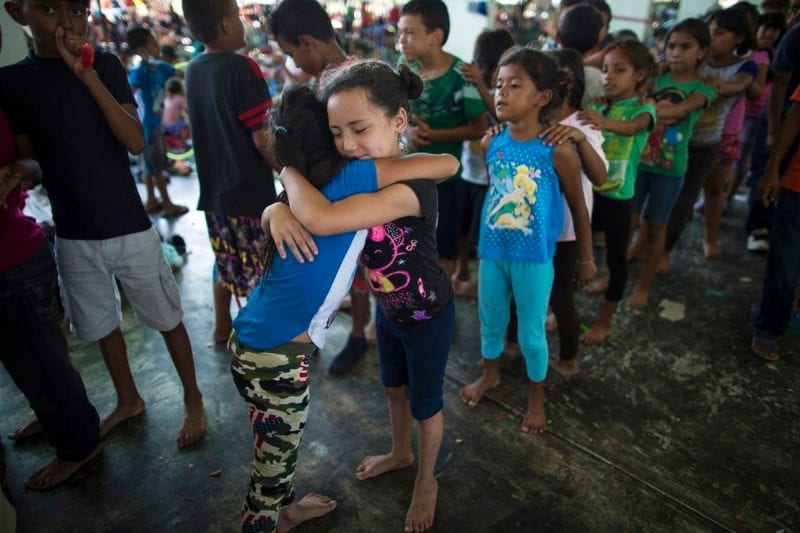 The ferocious terrorists described by Trump.

[dropcap]A[/dropcap]round 80% of the asylum seekers’ caravan heading towards the U.S.-Mexico border come, according to BuzzFeed, from Honduras. They are fleeing intolerable conditions in their country following the U.S.-supported coup against President Manuel Zelaya that happened nine years ago. HuffPost reports that  “thousands of indigenous activists, peasant leaders, trade unionists, journalists, environmentalists, judges, opposition political candidates, human rights activists, and others murdered since a military coup ousted the democratically elected president Manuel Zelaya in 2009.” They are fleeing a hell-hole.

In 2012 there were 20 homicides a day in Honduras, which has a population of nine million. Honduras has one of the highest murder rates in the world, as well as the highest rate of sexual violence. The violence mainly results from urban gangs’ drug trafficking and competition for global markets. MS-13 and the 18th Street Gang (both founded in Los Angeles) are entrenched in Tegucigalpa (the capital), and the industrial city of San Pedro Sula.  Many asylum seekers have been threatened by such gangs and are fleeing from them with the same sense of terror as those trying to escape government death-squads elsewhere in Central America.

One might argue that the U.S. has, through its support for the coup nine years ago, patronage of the current regime, and its vast market for cannabis, heroin and cocaine, helped produce this desperate exodus of Central Americans to the border. People with a hard choice: stay home, let the kids get recruited into a gang, killing or get killed while at least drawing steady pay. Or flee north, facing dangerous challenges, and pray for North American compassion at the end of the road. Anything for safety, food and shelter.

The slow-moving caravan of several thousand people is a latter-day Children’s Crusade. About half of it consists of boys and girls, accompanied or non-accompanied by parents. Donald Trump–citing law enforcement officials–wants you to believe the oncoming horde (which he calls the “lawless caravan”) is ridden with MS-13 gangsters and criminals who have been convicted of crimes ranging from armed robbery to sexual assault. He says “lots of people are saying” George Soros is funding the caravan–it could, that is to say, be linked to what fascists consider “the radical left.”

On Oct. 22 the U.S. commander-in-chief, widely understood in the world to be a bullying buffoon, declared, “Criminals and unknown Middle Easterners are mixed in.” Thus he announced in advance, to all prospective asylum applicants: “Nobody’s coming in.” And he says he will deploy “anywhere from 10,000 to 15,000” U.S. troops to defend the border against this “invasion.”

No show of Merkel-like compassion. No echo of the Statue of Liberty’s inscription: “Give me your tired and your poor…” Just rage against the brown, the desperately poor, vilifying them to produce warm fuzzy feelings in your racist supporters…

Karen Tumulty on CNN calls Trump our “stuntsman in chief” for threatening to deploy not just National Guard and border control but regular troops.  (One wonders what the troops will think about their deployment on such an unusual mission.) Should anyone so much as throw rocks at a U.S. soldier, Trump has declared that the soldier will respond in self-defense, meaning by gunfire since ” a rock is not much different than a gun.”

Think: rock-thrower. What images come up? David and Goliath. Palestinian boys with their sling-shots, responding to Israeli occupation. What happens to the boys? Too often, they get shot dead. Trump’s thinking sounds very Israeli: when the weak use the weapons of the weak, you shoot them dead. And positively boast about the deployment of “disproportionate force.” Because you want the world to FEAR you, always, big-time.

Plainly Trump hopes to rally his base over this issue before tomorrow’s balloting. He is surely familiar with Hermann Goering’s dictum: “All you have to do is tell [the people] they are being attacked, and denounce the pacifists for lack of patriotism, and exposing the country to greater danger.” Trump-backed TV ads depict the mass asylum bid as an “invasion” and Democrats who support as wanting the country flooded with rapists, murderers and drug traffickers.

Will the president’s manifest racism, ignorance, cruelty, and fear-mongering win his party victories tomorrow, or cost them? Polls show his racist rants are most popular in states with least immigration.  These fear tactics could produce a backlash; one hopes so. Or they could work. The world that rarely cares about U.S. midterm elections is paying keen attention to this one. Most rational people are hoping for the Democrats to take the House and stymie the Trump agenda, including plans for war with Iran.

Fascism is real, but the “resistance” is mostly fake

Rumor has it that Hillary has had a complete change of heart and personal transformation after having earlier supported the coup in Honduras which led to all this mayhem and suffering. It appears that now she and Bill now plan to house the caravan temporarily while they build long-term housing, and provide both schooling for the kids and job training for the adults. ;)

– The sad “reality” of course is that Hillary is a psychopath and hasn’t lost a minute of sleep over this, and that most of the Democrats who voted for Hillary had not the slightest idea of, nor interest in, the horrors Hillary unleashed in Honduras, Libya and Ukraine during her time as Sec. of State.

It is so absolutely clear: the US Power Elite´s war of Coups and destruction of Latin American coutries is the reason for Immigration into the US. You reap what you sow. But it appears also obvious that this Caravan must have been organized by someone following the consept “strategy of tension”. The Kids might be used (as legitimate it is for them to leave their destroyed homes to the US).