C. Berri's Germinal (1993) gained box office power by starring Gerard Depardieu in the lead and other world renowned actors.  The plot was of course provided by socialist Emile Zola, who had studied the miners appalling conditions in detail.

When the Industrial Workers of the World ( IWW AKA The Wobblies) was established in 1905, their goal was to see ' One Big Union ' formed in the USA. The Wobblies came from the socialist Western Federation of Miners organization led by William D Haywood. Up to that point the major union organization at the time was the AFL ( American Federation of Labor ) which was a gaggle of many autonomous unions. Sadly, the AFL and its member unions only represented high skilled and high paid workers. They refused to encompass the majority of American working stiffs, who happened to be low paid and low or unskilled laborers. One could only imagine if the AFL would have ' opened its doors ' to the majority. It didn't, for many reasons, one being that it was allowed by the super rich who ran industry to ' sit at their table'. There was also much discrimination by the AFL towards lower classes of immigrants. They wanted to curtail immigration, even advocating a literacy test for all immigrants... and this was a labor union!  Remember, this was over 100 years ago. Sounds familiar?

Claude Berri's 1993 blockbuster French film Germinal was based on an Emile Zola novel concerning French coal miner strikes in the 1860s.  In the film one can see what a feudal world looked like. As with John Sayles's 1987 film Matawan, about a 1920 coal miners' strike in West Virginia, the  miners lived in company owned rental properties and shopped in company owned stores... in both instances paying high prices for what they received. As it has always been with non union workplaces ( duh, like Florida's ' Right to work' laws making it more difficult for union organizing) the working stiffs always got the short end of the stick. Both of these films, depicting real life events mostly, ended with the strikers ultimately failing to get what they wanted. One scene in Germinal captured the feudal nature of things, and the mindset it established. The French miners finally organize a bit and send a small committee to meet with the mine owner ( an actual replica of a ' Lord of the Manor ') at his majestic home. They are ushered into his drawing room, with him seated behind his lavish desk. The small group of them then take off  their caps and hats and actually bow their heads a bit, as they stood in front of him... but never too close. 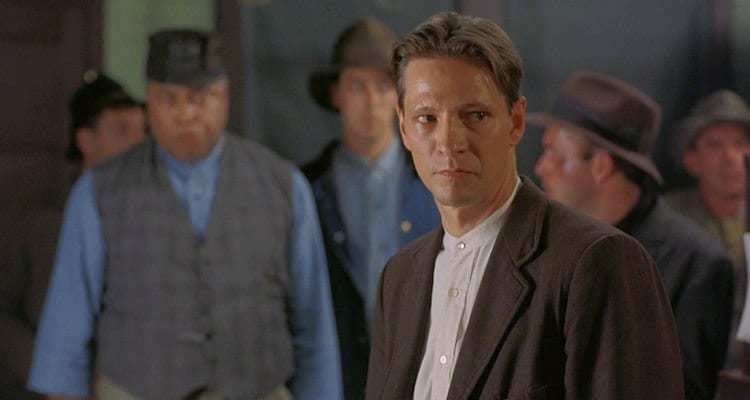 John Sayles' classic Matewan (1987) celebrates labor organizing in the context of a 1920s work stoppage. Chris Cooper plays a union organizer fighting the local coal company and its goons and allies in the state government in West Virginia.

What helped to instigate failure by the striking miners in both films was the appearance of those good old scabs. In Matawan they were poor Italian immigrants and poor unemployed Blacks sent in by train; in Germinal they came mostly from within their own ranks. Now imagine if you would if there was a situation of having ' One Big Union' in both of these cases. Imagine if all the coal miners and all paid labor in the entire region around the mines belonged to ' One Big Union'. There is no way that the owners could ever conceive of ending those strikes without first engaging in open and fair negotiations. Period! Of course, we know from historical labor study that the owners had resorted to using police and hired thug violence to quell strikes. Even then, this writer soundly believes that the presence of ' One Big Union' would quell such tactics. When an overwhelming number of people stand together under the banner of one common cause...cooler heads by the bosses may just have to prevail. Perhaps I am too naive... perhaps not.

People aren’t going to get this issue as long the they continue to refuse to acknowledge reality. Reality is that not everyone can work, and viable jobs are not available to all. We’re years into our war on the poor. Behind nearly every worker stands a line of equally-qualified people who are desperate for the chance to replace them, willing to work for less.