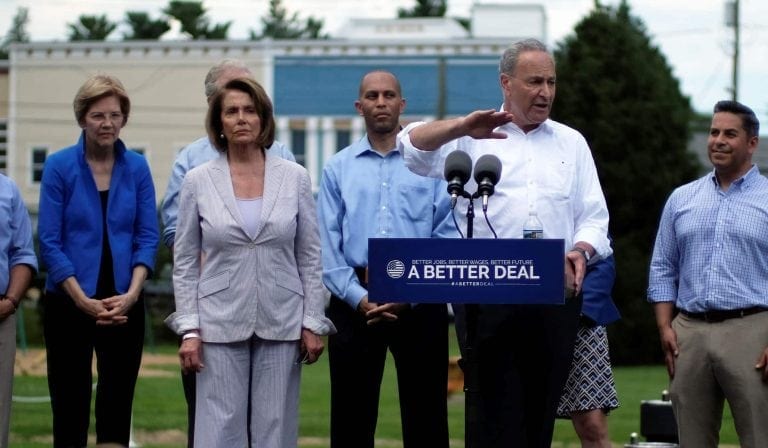 [dropcap]I[/dropcap]n the surreal alternative reality world of the US Congress, there are many bills passed each year that on the surface may sound like good ideas — they even give them high-sounding names like the US PATRIOT ACT or Better Care and Reconciliation Act, that in fact are the opposite of what they claim to be (the former actually being an unpatriotic undermining of the Bill of Rights and the latter actually being an unsuccessful attempt to repeal the Affordable Care Act (itself a deceptively named bill that forced middle-income families to buy hugely expensive insurance plans or pay a tax penalty).

But few of these deceptions are as egregious as one being pushed by embattled incoming House Speaker Nancy Pelosi (D-CA), who is advocating a bill that would require any legislation that would raise taxes on incomes in the bottom 80% to be passed with a 60% majority of the House.

That bill, while promoted by Pelosi as protecting the middle class from future tax rises, actually would make impossible passage of any bill expanding Medicare to cover all Americans, creating a kind of Canadian-model national health system, and might even prevent efforts to strengthen and improve Social Security benefits as called for by progressive Democrats.

The thing is, a broad majority of Americans, including many Republicans, and an overwhelming majority of Democrats, favor Medicare-for-All, a program that would extend and expand Medicare coverage making it a government insurance plan for covering all medical care for all Americans of any age — exactly what Canadians have had since 1971, and which they have overwhelmingly supported through both Liberal and Conservative governments since then.

And to fund such a program, Medicare taxes (currently 1.45% for worker and employer) would of course have to be significantly raised. But what conservative and even so-called “moderate” Democrats who oppose Medicare-for-All deliberately don’t say in criticizing the idea as a tax-increasing horror is that it would eliminate the need to pay insurance premiums for all people and also for employers, that it would eliminate the need to spend $140 billion a year or more on a Veterans Administration bureaucracy to care for military veterans, that it would eliminate Medicaid, the program that provides care for the poor and which currently costs over $600 billion a year in federal and state tax dollars, that it would end “charity care” which is the “free care” hospitals have to provide to ER patients who have to be treated if they have no other funding and don’t qualify for Medicaid — care which ends up raising private insurance premiums for those who do have insurance, and that would even lower car insurance premiums, since these would no longer have to pay for hospital care caused by accidents.

The lie here is that raising taxes on everyone to fund Medicare-for-All could in the end massively reduce health care costs for everyone in society, while also ensuring that nobody was without full access to fully funded health care. It’s what Americans want, poll after poll shows, even given all the propagada and lies about it, but Congress, including Democrats, are so anxious to keep receiving huge amounts of money from the Medical Industrial Complex, that they are loath to support a program that would cut out the private insurance industry, force the drug and hospital industry and physicians to receive negotiated payments reached with the government instead of charging whatever they want in a “market” that doesn’t really permit genuine consumer choice and competition.

As for Social Security, which badly needs an influx of new funds before 2034 when the current level of employee and employer payroll taxation (6.2% for employee and employer) will only cover some 78% of promised benefit payments. Any fix would inevitably involve some increased rate of payroll taxation on at least some people in higher income brackets, probably within that bottom 80% category in the proposed legislation supported Speaker Pelosi and many of her Democratic caucus.

Congress must at least present this issue honestly. Legislation in Congress should be considered on its merits, not constrained by artificial measures. In the kind of closely divided government we now have, requiring 60% support for passage of tax-impacting bills would block much critically important progressive legislation, for example on dealing with climate change. Meanwhile, it should also be clearly understood that Medicare-for-All type health care reform or for bolstering and improving Social Security, would not involve income taxes, but rather two dedicated payroll taxes on employees and employers — the FICA tax and the Medicare tax, which are currently 6.2% and 1.45% for individual taxpayers.  Any reforming of those two programs would require changes in the amount of payroll taxation paid by employees and employers, but Pelosi has not exampted those taxes from her proposed bill.

The other real problem with establishing a super-majority rule for passing measures that would raise taxes on lower-income Americans is that majorities of both parties are so consistently ready to support increased funding for the US military and to underwrite insanely expensive and destructive militaristic policies abroad including the endless wars launched since 2001 that have run up a bill so far of $5.9 trillion and counting, that Pentagon spending bills would have no trouble meeting the 60% vote threshold to pass military spending bills. Meanwhile more important legislation, such as passing Medicare-for-All, or climate change-combating legislation, or increased education support measures, etc., would not get 60% support and thus would just never pass.

Now that Democrats have won control of one house of Congress, we are already starting to see how flawed and disingenuous a bunch of people they really are. It’s not a pretty sight.