HELP ENLIGHTEN YOUR FELLOWS. BE SURE TO PASS THIS ON. SURVIVAL DEPENDS ON IT.
Black Agenda Radio with Nellie Bailey and Glen Ford

With the CIA on point, U.S. militarists are implementing Joseph Goebbel’s formula to reignite the Cold War. “You tell a very big lie, and tell it over and over again, and it becomes the truth,” said Ron Ridenour, author of The Russian Peace Threat: Pentagon On Alert. 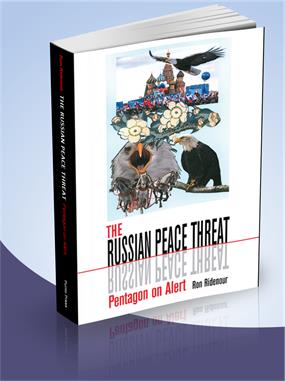 Ron Ridenour’s book, The Russian Peace Threat: Pentagon on Alert, a true historical page-turner, is destined to endure and inform future readers, writers and researchers about both what has been reported and what truly took place in the one hundred years from the 1917 Russian Revolution until the eruption of the distinct harbingers of the collapse of the US empire in the early twenty-first century.
"Masterfully written . . . breathtaking in scope and depth!"—John Rachel

Khashoggi Part 2: A ‘reformer’…who was also a hysterical anti-Iran/Shia warmonger?