Home AMERICAN BRAINWASH On the Brink of Apocalypse: Lock Him Up (and Obama & Hillary too)

SUNDAY HOMILY: The season’s apocalyptic readings have me wondering when our fellow peasants who don’t share Jesus’ commitment to non-violence will get out their pitchforks and storm the White House and other seats of government. 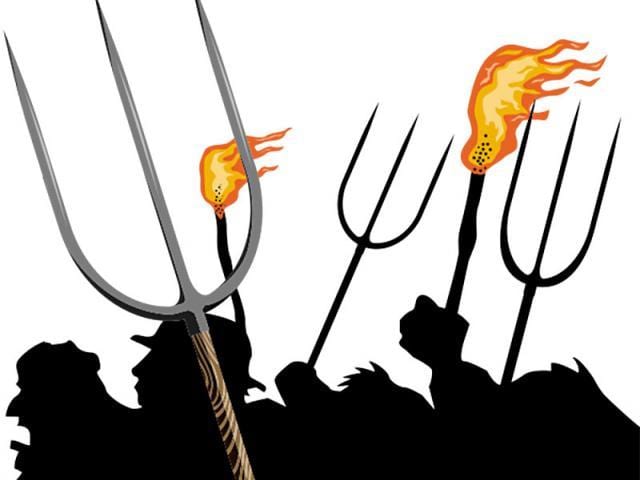 We’re standing on the brink of Apocalypse. I don’t mean the end of the world. I’m talking about the end of empire.

That’s the point I tried to make here two weeks ago, when our Sunday liturgies began featuring apocalyptic readings from both the Jewish and Christian Testaments. That’s what the biblical literary form “Apocalypse” is about– not the end of the world, but the end of empire.

Apocalypse is resistance literature, written in code during times of extreme persecution by powerful imperial forces like Greece and Rome. The code was understandable to “insiders” familiar with Jewish scripture. It was impenetrable to “outsiders” like the persecutors of the authors’ people.

In our own case, all the provocations of apocalyptic rebellion are there. Our country is following faithfully in the footsteps of the biblical empires against which apocalypse was written: Egypt, Assyria, the Medes and Persians, Babylon, Greece, and Rome.

To say it unambiguously: Our government is headed by gangsters pure and simple. It’s as if Antiochus IV Epiphanes, Nero, Caligula, Domitian –or Al Capone — were in charge. All of them (Trump, Obama, the Clintons, and the Bushes) should be in jail. In fact, as Chomsky has pointed out every single post-WWII U.S. president from Truman and Eisenhower to Carter, Reagan, the Bushes, Clinton, Obama, and Donald Trump has been guilty of crimes that contradict the Nuremberg Principles. The only policy difference between Donald Trump and his immediate predecessors is that he’s blatantly shameless in owning his criminalities.

Here’s what Chomsky has said:

To clarify Chomsky’s point, here’s a short list of our current president’s most recent atrocities. He has the country:

All of that is relevant to today’s liturgical reading, because (as I’ve said) this is the third week in a row that the lectionary has given us readings from apocalyptic literature.

As I indicated, apocalypse differs from ordinary prophecy in that it addresses periods of deep crisis, when the whole world appears to be falling apart. Neither prophets nor apocalyptics were fortunetellers. Instead, they were their days’ social critics. They warned of the disastrous consequences that inevitably follow from national policies that deviate from God’s will — i.e. from policies that harm God’s favorites: widows, orphans, immigrants, the poor — and (we might add) the planet itself.

When Luke was writing his gospel around the year 85 of the Common Era, Jerusalem had been completely destroyed by the Romans in the Jewish War (64-70 CE). The Romans had brutally razed the city and the temple that had been rebuilt after the Babylonian Exile. For Jews that was something like the Death of God, for the Holy City and its Temple were considered God’s dwelling place. The event was apocalyptic.

In today’s gospel, Luke has Jesus predicting that destruction using specifically apocalyptic language. Luke’s Jesus says “There will be signs in the sun, the moon, and the stars, and on the earth distress among nations confused by the roaring of the sea and the waves. People will faint from fear and foreboding of what is coming upon the world, for the powers of the heavens will be shaken.

What can such apocalyptic message mean in our own day faced as we are with a false crisis stemming from U.S. policies in Central America in general and in Honduras in particular that identify the poorest people in the world as the causes of our problems instead of climate chaos and narco-kleptocrats?

Yes, the immigrant crisis is a mere distraction — a completely human and remediable fabrication caused by U.S. policy. Meanwhile, the real threat to our planet is the threat of nuclear war and the environmental cliff that our “leaders” refuse to address. And who’s responsible for that crisis?

Prominent religious leaders would have us believe it’s God. He (sic) is punishing us for opening borders to the poor, for Roe v. Wade, for legalizing same sex marriages, or for allowing women access to contraception. Let’s face it: that’s nonsense. It turns Jesus’ embodiment of the God of love on its head. It turns God into a pathological killer — a cruel punishing father like too many of our own dads.

The real culprit preventing us from addressing climate change and the causes of the refugee crisis is our government. Our elected politicians are truly in the pockets of Big Oil, the Banksters, narco-criminals and other fiscal behemoths whose eyes are fixed firmly on short-term gains, even if it means their own children and grandchildren will experience environmental apocalypse.

What I’m saying is that this government has no validity. How dare a small group of climate-change Philistines take it upon themselves to decide the fate of the entire planet in the face of overwhelming evidence contradicting their stupidity?

It all has me wondering when our fellow peasants who don’t share Jesus’ commitment to non-violence will get out their pitchforks and storm the White House and other seats of government.

Remember: It was Thomas Jefferson who advised periodic revolution. He said: “What country before ever existed a century and a half without a rebellion? And what country can preserve its liberties if their rulers are not warned from time to time that their people preserve the spirit of resistance? Let them take arms. . . The tree of liberty must be refreshed from time to time with the blood of patriots and tyrants. It is its natural manure.” 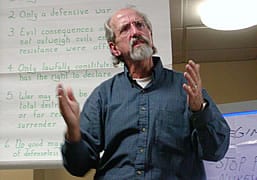 Mike Rivage-Seul is a liberation theologian and former Roman Catholic priest. Retired in 2014, he taught at Berea College in Kentucky for 40 years where he directed Berea’s Peace and Social Justice Studies Program. Mike blogs at http://mikerivageseul.wordpress.com/

Just How Corrupt Is The American Soul?

In the comments under the OpEdNews version of this article, author Mike Rivage-Seul expressed gratitude for my own OpEdNews article alerting him to the enormous importance of the Sunrise Movement, which he expressed his own intention to support. https://www.opednews.com/articles/On-the-Brink-of-Apocalypse-by-Mike-Rivage-Seul-Banksters_God_Hillary-Clinton_Hillary-Clinton-War-Hawk-181128-117.html

Seeing that that’s the case, I’m curious whether TGP intends to publish my own piece (sent to TGP yesterday): https://www.opednews.com/articles/Peace-Activists-Best-Hope-by-Patrick-Walker-Activist_Climate-Change_Climate-Change-Protest-Activism_Climate-Crisis-181202-316.html

We never saw this post until the note above. In any case, it is now flying on the front page:

Be fair. The Clintons not only succeeded where Republicans failed — completely split apart those who aren’t on the right wing — but made it cool for liberals to support the push for nuclear world war, US vs. Russia and China. That was a remarkable achievement.

Americans are corrupted alright, with insouciance, willful ignorance, greed, hypocrisy and militarism! What more do you need?

After living out of country for over 29 years and speaking with people from all over the world, These statements reflects the sentiments of most whom I spoke with. The world is disgusted with what the US has become. Of course, if you get your “news” from domestic media, (propaganda machine), you wouldn’t know that because you get little if any world news or opinion.

“Refusing to recognize the validity of a CIA report identifying Mohammed bin Salman as the Mafia Don who ordered the beheading and dismembering of a correspondent for a major U.S. newspaper.” Why have you included this statement? Bizarre…