Home ABOMINATIONS PETA and the ‘S’-Word

Speciesism is the most extreme, violent and accepted form of discrimination in the world—indeed in history.


Those “disturbing” and “offensive” maniacs over at PETA are back at it, this time with an “extreme” suggestion that people stop using expressions which, in the organization’s view, “trivialize cruelty to animals.” Substitute other expressions, PETA proposes.

The alternative idioms were presented in a computer-generated chart via Twitter, along with the following statement: “Words matter, and as our understanding of social justice evolves, our language evolves along with it. Here’s how to remove speciesism from your daily conversations.”

In a follow-up statement PETA wrote: “Just as it became unacceptable to use racist, homophobic, or ableist language, phrases that trivialize cruelty to animals will vanish as more people begin to appreciate animals for who they are.”

Within hours the headlines proliferated, all to the same effect. USA Today titled their story: “PETA ridiculed, criticized for comparing ‘speciesism’ with racism, homophobia and ableism.” 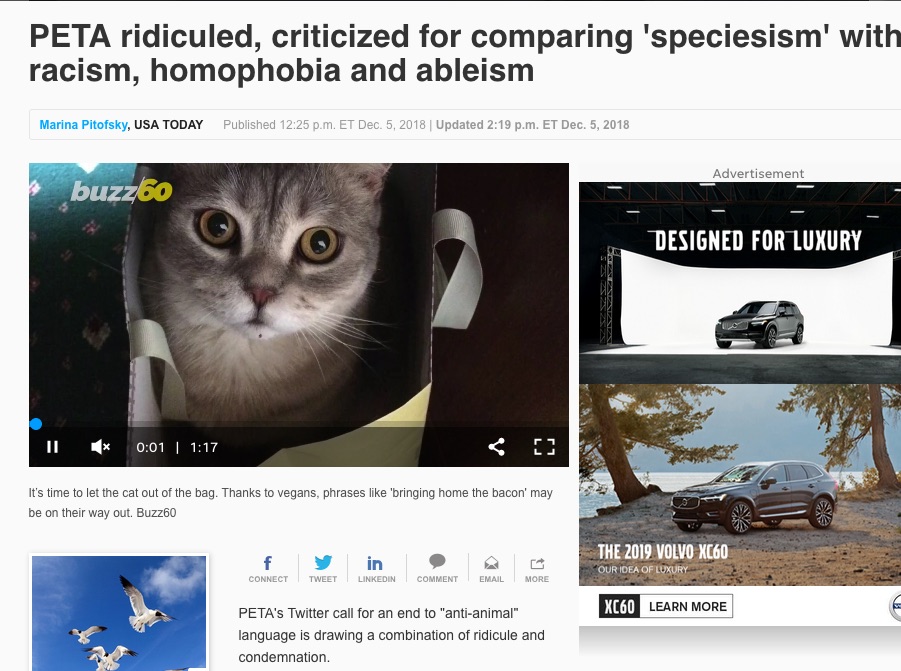 Note the inverted commas enclosing speciesism. The implication is that it’s either a new idea, or a flawed one that doesn’t have any practical meaning. USA Today even took it upon themselves to include the scare quotes in their quotation of PETA’s statement, which did not use scare quotes.

And why would it? The term, used to describe the prejudice with which human animals view and behave towards non-human ones, has been around for nearly fifty years. You’d have to be living under a rock not to have come across it by now. When I type it into my word processor, I don’t get a notification that I’ve misspelled a word or used one that doesn’t exist; when I misspell it, it autocorrects.

Nevertheless, most of the articles about PETA’s latest outrage employ the inverted commas, and emphasize that people on the internet are very indignant that the group has compared the made-up concept of speciesism to real ones like racism and homophobia.

This is curious. One doesn’t have to be an animal rights activist to recognize that discrimination against non-human animals is, to use the modern argot, “a thing.” Even if you hate animals and believe that factory farming is a wonderful innovation, what’s the point of pretending that speciesism doesn’t exist? So that it may continue?

Perhaps the homophobes and racists and misogynists can shed some light on this—after all, they’re the only ones denying that their preferred form of bigotry exists.

We all know speciesism exists, and we all know it’s the most extreme, violent and accepted form of discrimination in the world. Again, you needn’t be a member of the Animal Liberation Front to concede this uncontroversial fact. Call it legitimate if you want, but don’t deny it.

Many billions of animals are systemically butchered every year to afford human beings the luxury of consuming their flesh or wearing their skin. Untold numbers are exploited and abused for the purpose of human entertainment, or otherwise killed by humans for various reasons, or no reason at all. What do we call this if not speciesism? Sadism? Perhaps USA Today will coin a new term for us.

The media delighted in citing a handful of tweets from anonymous persons who either mocked PETA’s stance or claimed to be offended by it. None mentioned that PETA’s tweet received over 35,000 likes and was retweeted more than 12,000 times in twenty-four hours. That might undermine the narrative. 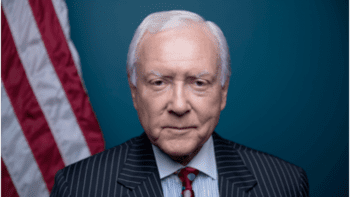 No surprise that Orrin Hatch, a hardcore reactionary who has blighted the US Congress for many years, and a friend of agribusiness, would take the side of the safe majority. In fairness, however, speciesism is a moral plague that cuts deep among liberals, too.

Breitbart News (sic) focused its coverage on Republican Senator Orrin Hatch’s response, which was to post a video clip of himself eating bacon in slow motion, set to the music fromFerris Bueller’s Day Off. Because few things are funnier than torturing and killing pigs, whose intelligence levels are comparable to that of a three-year-old human being.

For the most part the stories were disguised as objective reports, some with a few obvious quips thrown in (“We have bigger fish to fry, ha-ha,” etc.), mostly because the major media can’t be bothered to engage with the issue of animal rights (or liberation, or whatever you prefer to call it): for them it’s simply not worth the column inches.

At least Lemon has an excuse for his fatuous take—he was put on the spot and, having no eloquence, found himself unable to come up with an intelligent argument. Speaking extemporaneously, and coherently, is difficult. See Donald Trump.

Writing a coherent blog post isn’t as difficult, but you wouldn’t know this from reading Dr. Alex Berezow’s for the American Council on Science and Health (sounds reputable enough). In a short piece that takes direct aim at PETA—whose “tactics hurt animal rights … and people”—the good doctor harangues the organization for allegedly overlooking terrible things like poaching, habitat destruction and the “questionable” habit of holding dolphins and orcas captive in zoos and theme parks.

The adjective quoted above tells you everything you need to know about where Dr. Berezow is coming from. Going to see the latest Michael Bay movie is questionable; keeping intelligent animals imprisoned for their entire lives so that humans may gawk at them is depraved. Failing to apprehend this distinction is moronic.

Rather than focusing on the real issues, Doc Berezow contends, PETA is primarily “interested in extremely bizarre and illogical publicity stunts” They also feature ads with naked women, which means they think it’s “morally justifiable to sexually objectify women on behalf of cockroaches or whatever they happen to be protesting that day.”

I think PETA would be intrigued to learn that they have “protested” cockroaches on some prior occasion, but we’ll set that aside. The women (and men) who appear in PETA’s provocative ads do so voluntarily—evidently their souls have yet to be saved by Father Berezow.

Despite his occupation, Dr. Berezow isn’t one for research. According to his data, PETA spends its $48.4 million budget on kooky publicity stunts and misogynistic advertisements. A breakdown of what that money actually goes towards is freely available on the organization’s website. Now why would the good doctor neglect to find this information out? It couldn’t be that it happens to contradict his bias.

Presumably to illustrate to readers just how lazy and/or dishonest he is, Dr. Berezow claims that PETA is “ideologically opposed” to the notion of pets, linking to an article in which PETA states:

Contrary to myth, PETA does not want to confiscate animals who are well cared for and “set them free.” What we want is for the population of dogs and cats to be reduced through spaying and neutering and for people to adopt animals (preferably two so that they can keep each other company when their human companions aren’t home) from pounds or animal shelters—never from pet shops or breeders—thereby reducing suffering in the world.

Did you know that PETA is also “an enemy of science”? That’s because they oppose experimentation on animals, a complicated subject that the organization has previously addressed at length, with sources. Per Dr. Berezow, realizing a total ban on vivisection is PETA’s “biggest mission.” You can ask them if that’s true, or take the doctor’s word for it.

Misogynistic, anti-science, insensitive to the plight of racial and sexual minorities … why don’t the media just call PETA “species traitors” and get it over with?

About the Author
Michael Howard is a freelance writer from Buffalo, NY.