The Yellow Vest Insurgency – What’s Next? 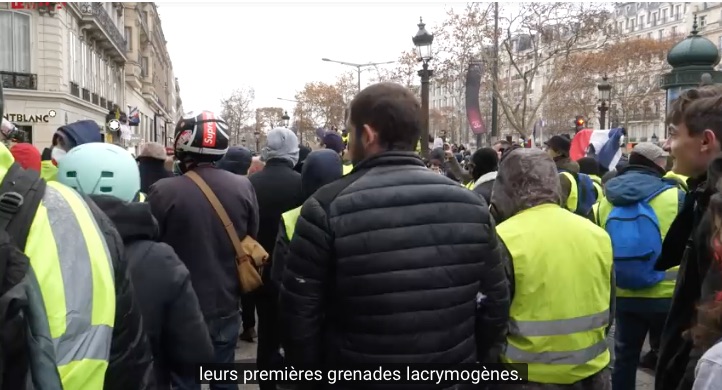 Paris, France, December 2018: A potential worldwide insurgency of the working class starts in France as Yellow Vests occupy the streets.

“Some 75% of the French back the gilets jaunes. And this support has held up despite the violence.” (Source: La République en Flammes, The Economist, December 8-14, 2018)

[dropcap]T[/dropcap]he French Yellow Vests Insurgency may or may not grow into a major threat to the established order; nobody knows for sure how it will play out.

Nevertheless, the undertone has been obvious for some years. Once the world publicly recognized a division between the 1% and everybody else, the stage was set for flare-ups, like the Yellow Vest Insurgency movement, as tens of thousands of people dressed in bright yellow vests hit the streets.

Why would tens of thousands of people wearing bright yellow vests, similar to roadside workers, hit the streets? Answer: They’re pissed off!

And, where do tens of thousands of the yellow vests come from? In 2008 France passed a law requiring all motorists to have high-visibility vests in vehicles as a safety measure should the driver need to exit a vehicle on a roadside. Therefore, everybody with a vehicle in France has a yellow vest.

It goes without saying that, over the past three decades, neoliberal globalization set the table for dissolution of the middle class as wages around the world collapsed into a SE Asian vortex of slave labor. This is the heart of the matter behind the Yellow Vest movement, albeit sparked by the Macron government’s new fuel taxes. This is also the biggest reason why a worldwide revolution of the working classes may actually happen, inclusive of pretty much everybody below the top 1% plus the upper-upper-middle-class. 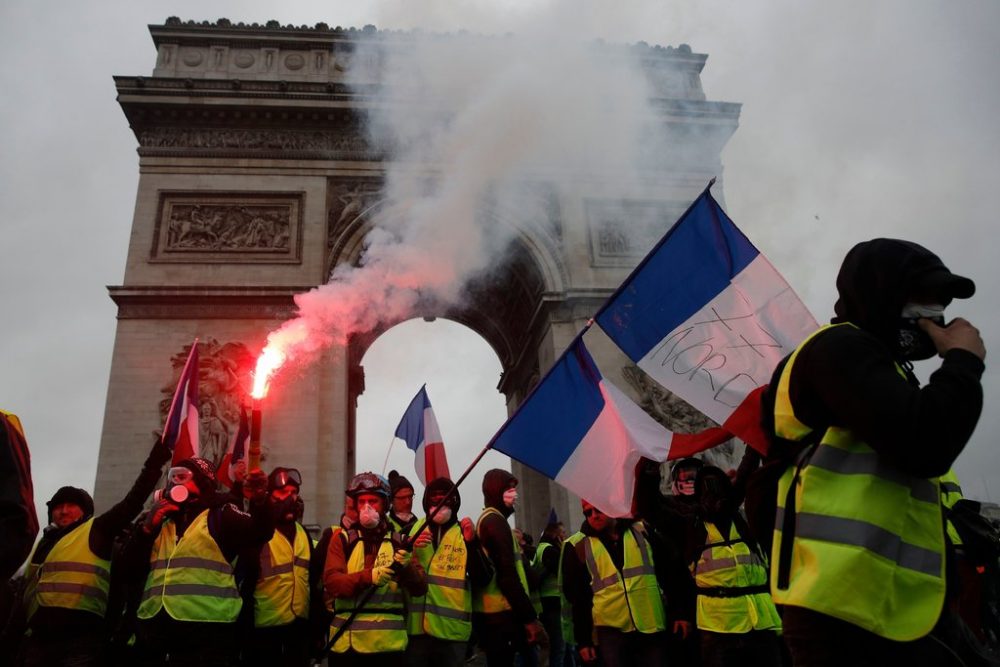 So far, repercussions have been potent on a worldwide basis. For example, retail stores in Cairo have been ordered by the police not to sell yellow vests. Egypt’s abusive dictator General Abdel Fattah al Sisi is looking over his shoulder at France where Yellow Vests have established a foothold that’s spreading like a house afire.

Without doubt, governments are panicked over the prospect of radicalization of the international working class. In France, working class demands include social equality, wage increases, a halt of militarism, reinstituting the wealth tax, and the overthrow of unpopular governments, making Macron look an awful lot like a modern-day clone of Louis XVI (beheaded in 1793).

Recently, Macron made some concessions to demands of the Yellow Vests. They’re not impressed!

“This time, however, is different. The gilets jaunes emerged from nowhere via social media. They are not the product of organized unions or political parties. Their structureless and leaderless nature makes them potent, volatile, and difficult for the police and government to handle. They do not follow the codified rules of protest. Their diverse demands range from an end to the eco-tax to the resignation of Mr. Macron – and even his replacement with a military general. And the government cannot find leaders willing to attend meetings,” Ibid.

Without doubt, governments are panicked over the prospect of radicalization of the international working class. In France, working class demands include social equality, wage increases, a halt of militarism, reinstituting the wealth tax, and the overthrow of unpopular governments, making Macron look an awful lot like a modern-day clone of Louis XVI (beheaded in 1793).
All of which describes the future of revolutionary activity throughout the world. It is seamlessly simple and frighteningly powerful.

In Algeria, protestors donned yellow vests in response to a failing system, as family after family cannot afford the basics of life.

In Tunisia, a new group called “Red Vests” issued a call for protests of a Tunisian political system that promotes “systematic impoverishment.”

In Belgium, police violently cracked down on angry groups of Yellow Vests with similar demands.

“Yellow Vest” has become a catchall for all of the grievances of working people. Indeed, this is how revolts commence in earnest. And, it is indicative of a world order that is edgy, angry, and ready for conflict with the first spark of ignition.

The precursor for the present insurrection was identification of an elite class, or the 1%. Throughout history, revolutions aspire to confrontation once lines of division have been clearly drawn, e.g., the Boston Tea Party, or the fall of the Bastille, or today’s “One Percent,” which clearly divides the world into “haves” and “have-nots.” Certainly, the One Percent is one of the clearest, easiest targets of all time. 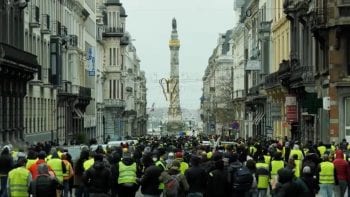 Gilets Jaunes demonstrating in Brussels. The city has been extremely sympathetic to events in France, and especially Paris.

Not only a clear division, but years of pent up anger magnifies when people know they’ve been screwed. Under Macron, for example, French subsidies for part-time jobs were slashed, housing aid for low-income people cut, and pension checks axed, as he repealed France’s wealth tax, meaning more goodies for the rich at the expense of everybody else. It doesn’t take an accountant to figure out that the working class ends up subsidizing the wealth tax cut.

Furthermore, once people voice dissent in the streets, like the fuel tax revolt in France, magnification of many other issues come into sharp focus. For example, in France students have walked out of 200 schools to protest reforms to high-stakes baccalaureate exams and new higher-education admission procedures. And, university students are now protesting recent hikes in tuition.

Four words, “Yellow Vests and One-Percent,” have converged in a firestorm of resentfulness of every inequity propagated by the utter failure of elite capitalistic globalism punctuated by its neoliberal tendencies. It’s as if the world has lost its way, directionless meandering that honors wealth creation but nothing else.

Similar to the Arab Spring of 2010, minor events reverberate into major events, which may or may not explode into a massive revolution in protest of a capitalistic system that shamefully rewards the rich by preying on workers of the world. But, social media fights back.

The discontent is all about austerity efforts, for example, Philip Alston, the UN Special Rapporteur on extreme poverty and human rights described the austerity policies in the UK as “punitive, mean spirited and callous… heading towards an alienated society made of dramatically disconnected groups, those living the high life and the very poor, relying on food banks even if in work.” (Source: UN Special Rapporteur Makes damning Criticism of Austerity, National Survivor User Network, Nov. 2018)

Philip Alston’s study of austerity policies and consequences equally applies to major developed countries throughout the world, as “austerity” has been the order of the day in Turkey, Italy, Greece, France, Portugal, Spain, Ireland in large measure to satisfy the EU and IMF that their loans will be repaid. Oh please!

Revolutions start with a loss of decency. Today, the world is full of indecencies for the “working poor.” The Yellow Vest insurgency is only possible because of a failure of global capitalism to uplift the working class.

Instead, it puts a boot on their necks.

The Sociopath as Hero

Billionaires’ wealth grows faster in France than in any other country

That phrase “wealth creation” is a lie. More truthful is “wealth acquisition.”

We’ve (US) been through decades of mass upward wealth redistribution, from poor to middle class, middle class to rich.

So, this is just about the grievances of the more fortunate, the currently employed? It can be difficult to understand what’s happening elsewhere, once that news is filtered through our media.