[dropcap]C[/dropcap]linton’s reemergence is a dangerous reminder of who she really is: a “too big to fail” parasite of finance capital and the war machine.

“Her embarrassing defeat to Trump did not cause the ruling elites to disinvest from the Clinton machine.”

Black revolutionary Malcolm X famously said that Black America didn’t experience an “American Dream,” only an American nightmare.  The so-called American Dream continues to be a nightmare. US imperialism has successfully held Black America in political captivity in the Democratic Party despite the self-proclaimed “lesser evil” party having played a vital role in every ill that befalls Black people. Democratic Administrations have been the architects of the mass incarceration regime in the United States, partners in the world incineration regime known as the U.S. military state, and active participants in the theft of nearly every dollar of Black wealth that existed prior to 1983. Hillary Clinton is the Democratic Party’s top sponsor of the American nightmare for Black Americans and she is once again making headlines in an apparent attempt to assert herself in the upcoming Presidential election of 2020.

It may only be 2018, but the divided and increasingly unpopular Democratic Party has been testing the Presidential waters since Clinton lost in 2016. For Black America and all of humanity’s exploited and downtrodden, Clinton’s reemergence is a dangerous reminder of who she really is: a “too big to fail” parasite of finance capital and the war machine. In an interview with The Guardian, Clinton remarked that Europe must “get a handle”  on its immigration problem to stop the march of the far right. What Clinton meant was that Europe should further militarize its immigration policy to appease racist Europeans. She of course didn’t mention that European imperialism, under the leadership of the United States, is the real culprit in the refugee crisis. To do so would be an admission of guilt, as few others are more responsible for the massive displacement of peoples that has occurred worldwide since 2011 than Hillary Clinton.

“Clinton called for a no-fly zone in Syria, a code word for a massive bombing campaign.” 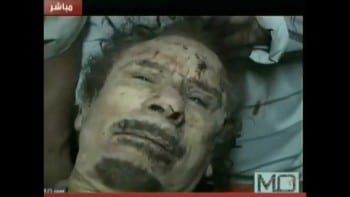 It is no secret to most people around the world that the U.S.-NATO invasion of Libya engineered the largest refugee crisis in human history. However, few in the United States remember Clinton cackling to the corporate press “we came, we saw, he died”  after U.S.-backed jihadists ruthlessly assassinated Libyan leader Muammar Gaddafi. What came after the destruction of Libya was anything but laughable. The Obama and Clinton-led U.S.-NATO-Zionist and Gulf state alliance quickly moved on to Syria and, as the Black Alliance for Peace explains , expanded their reign of terror in Africa by way of the U.S. African Command (AFRICOM). Millions of Syrians and Northern Africans from nations such as Mali have been displaced by jihadists armed with imperial military gear and a mission to sow political and economic chaos. As Black Agenda Report Editor Glen Ford stated in 2016,Turkey and Europe have been trafficking humans on a scale not seen since the Trans-Atlantic Slave Trade. Despite this, Clinton stated that she wanted to gift the planet with more refugees in the 2016 election. Clinton called for a no-fly zone in Syria,  a code word for a massive bombing campaign that would surely have led to a military confrontation with Russia if carried out.

“While Clinton may have lost the 2016 elections, she certainly did not lose her influence over the political direction of the imperialist system.”

One must ask why Clinton made her most recent comments about the issue of refugees in lieu of the fact that they seem to invoke memories of her imperial legacy. The comments angered pro-refugee progressives throughout the Western world and for good reason. They are indicative of sheer ruling class arrogance and reveal the extent to which she will expand her big, nasty tent of ruling class deplorables to achieve political ends. The plight of refugees has no seat under this tent. But the far right does; so long as it behaves in sync with the real ruling class, the finance capitalist class, of which Clinton is a VIP member.

[dropcap]T[/dropcap]he United States has perfected the art of inducing short-term memory loss in most Americans when it comes to matters of history and politics. Thus, it was forgotten that while Clinton may have lost the 2016 elections, she certainly did not lose her influence over the political direction of the imperialist system. Clinton and her allies in the finance capitalist class have continued their tirade through weapons such as Russiagate wielded by the intelligence apparatus and the corporate media. These deplorable forces have aligned with the Trump Administration when it has served the aims of economic and military warfare against Russia and China and the profits of the banks and monopolies. The American Nightmare has continued for most Black Americans and workers generally, half of whom cannot afford an emergency of $500.  With the 2020 election fiasco fast emerging, one has to wonder if Clinton hopes to try once again to win the highest seat from which to spread the American Nightmare far and wide.

There are some rumblings from Clinton’s former aid Mark Penn  that a third run at the Presidency may be in the cards. Clinton has already announced that she “would like to be President”  and continues to shed her racist and imperialist wisdom on issues such as immigration and the death of Washington Post “journalist” Jamal Khashoggi. The Chicago Sun Times  wrote a glowing yet superficial endorsement of Clinton for the 2020 nomination, claiming that Clinton possesses the “experience” to defeat Donald Trump. Some corporate outlets such as New York magazine and CNN disagree and would rather try their hand with a new neoliberal imperialist face such as Kamala Harris, Elizabeth Warren, or Beto O’Rourke. The rich white boy wonder of Wall Street  O’Rourke has been called the “white Obama” by the 44th President’s former lackeys.

“Clinton has already announced that she “would like to be President”  and continues to shed her racist and imperialist wisdom on issues.”

[dropcap]W[/dropcap]hether Clinton runs or not, she remains an instrumental figure in the ruling class. Her embarrassing defeat to Trump did not cause the ruling elites to disinvest from the Clinton machine. Clinton will have a hand in the 2020 election. Donald Trump will either run against her or another corporate Democrat. Beto O’Rourke, Kamala Harris and Elizabeth Warren are ready to carry on her blood soaked, finance capitalist agenda. The nomination of charter school sugar daddy and servant of finance capital Hakeem Jefferies  to the Democratic caucus seat is a stark indication that the Democratic National Committee (DNC) and the Clinton-wing of the party has no intentions of supporting even the mildest social democratic agenda like that put out recently by Bernie Sanders.

Currently, the crisis in the Democratic Party is far graver than in the White Man’s Party. Donald Trump can comfortably carry out the deeds of the ruling class while posing as the celebrity President. Trump’s rule has been another chapter in Malcolm’s American Nightmare, but not because Trump is a special case. Trump’s Administration has been consistent in the escalation of imperialist wars by dropping more bombs on Afghanistan in one year than any other President prior. He has cut taxes for the rich and continued the bipartisan consensus of criminalizing immigrants. However, the ruling class will stop at nothing to paint him as a “Russian” [asset] regardless of how much his Administration has increased sanctions against Russia and built up the U.S.’ military presence along the Russian border. That’s because under this period of imperialism, the ruling class is not satisfied until the entire planet is swallowed by capital and every vestige of social solidarity and protection is stripped from the people.

“The Democratic Party is the biggest obstacle in the way of ending the nightmare because it keeps Black America in political captivity.”

Hillary Clinton and the rest of her wing of the Democratic Party is plenty experienced in ravaging the planet and the people, especially Black people. Trump is occupying the highest seat inside of Malcolm’s American Nightmare on steroids, and he isn’t doing it to the liking of the most influential section of the ruling class in Wall Street and the Pentagon. Malcolm’s American Nightmare, then, cannot be transformed in a “resistance” against Trump. The people must be in motion against the entire ruling class and system. Black America has historically led whatever real resistance has arisen to the American Nightmare. And the Democratic Party is the biggest obstacle in the way of ending the nightmare because it keeps Black America in political captivity.  The Democratic Party needs the White Man’s Party to keep poor Black Americans and the entire working class chained to the Democratic arm of the imperialist system. Those chains must be broken, as Malcolm X said, “by any means necessary.”

About the author
Black Agenda Report's  Columnist Danny Haiphong is an Asian activist and political analyst in the New York City area. He can be reached  at  wakeupriseup1990@gmail.com

Who Needs Warriors? The Empire Does

I have been noticing for quite a long time now that this author Danny Haiphong is among the cream of the crop, surely he can’t be as young as pictured ? He is just a very insightful guy, he pulls no punches, and always digs for deeper. Black Agenda Report is among the Vanguard, as is this site right here among the very best now, and personally I keep up on both always looking for future direction and best advice. and what is Cornell West doing lately ? He needs to pipe up more. Currently I am working with the… Read more »