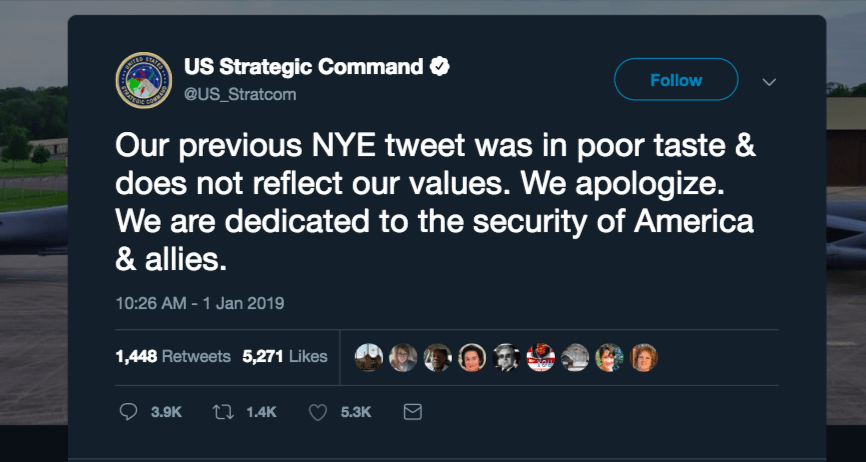 US Strategic Command (or “Stratcom” if you’re trying to make a nuclear-capable arm of the US Defense Department sound cool) has issued an apology for a poorly received New Year’s Eve tweet which has since been deleted.

“#TimesSquare tradition rings in the #NewYear by dropping the big ball…if ever needed, we are #ready to drop something much, much bigger,” the offending tweet read, with an attached video featuring B-2 stealth bombers flying all stealth bombers and causing gigantic explosions with bunker buster bombs while words like “STEALTH”, “READY”, and “LETHAL” flashed across the screen. The tweet concluded with the ostensibly unironic hashtag “#PeaceIsOurProfession”.

“Our previous NYE tweet was in poor taste & does not reflect our values,” Strategic Command tweeted. “We apologize. We are dedicated to the security of America & allies.”

Our previous NYE tweet was in poor taste & does not reflect our values. We apologize. We are dedicated to the security of America & allies.

This statement is, obviously, a lie. The part about “security” of course, because dominating the globe with nonstop military violence and aggression has nothing to do with security, but also the “does not reflect our values” part. The US military deleted the post and apologized for it because it received an angry backlash from hundreds of commenters and was circulated virally on Twitter for its jarringly creepy message, not because it did not reflect their values. It reflected their values perfectly. The only way you could possibly encapsulate the US military’s values in a 42-second video clip more perfectly than cramming it full of footage of $2,000,000,000 war planes cruising around dropping $3,500,000 GBU-57 bombs would be to also show the human bodies they land on being ripped to pieces. Inflicting death and destruction using unfathomably expensive machinery is the US military’s whole job. Of course it reflects their values.

The real issue here was not values but perception. The US war machine pours an immense amount of energy into perception management, making sure that ordinary Americans either (A) ignore the horrific things that are being done in their name or (B) think that those things are awesome and patriotic. The offending post was clearly attempting to accomplish (B). A team of paid social media propagandists simply did not understand that ordinary human beings wouldn’t resonate with a message that amounts to “Hey I see you’re all preparing to bring in the new year, so watch how good we are at killing large numbers of people!”, and some damage control became necessary when everyone got freaked out. Can’t have people opening their eyes to how insane America’s relentless military expansionism has gotten, after all.

Watching the propaganda arm of the US-centralized war machine is a lot like watching a manipulative sociopath learning how to function in normal society. Sometimes they’ll slip up and fail to react the way someone with a healthy sense of empathy would respond to the death of a pet or someone’s emotions or whatever, and they risk alienating whoever’s around them and losing access to the resources they could exploit them for if they can’t manipulate them out of the creeped-out feeling people get when they’re around someone who doesn’t empathize like a normal human being. I suspect many of the commenters who flooded in telling Stratcom to delete its tweet were not so much interested in eliminating a violent social media post from the internet, but in eliminating that creeped-out feeling you get when the sociopath’s mask slips a bit.

I’m so glad I had decided to download this video from the #UnitedStates StratCom Tweet earlier.
Here’s the video the StratCom had released earlier today. They took down the tweet.
Here’s the video for any of you looking for it.#HappyNewYear2019 #StealthBomber pic.twitter.com/QEkEkuCNCr

And that’s understandable. One of the biggest obstacles in getting people to realize how deeply propagandized they are is the cognitive dissonance which comes rushing in when one considers the implications of viewing the world free from the lens of military psychological manipulations. Without the lies about how beneficent and necessary and awesome the military is, all you’ve got is trillions of dollars worth of instruments of death circling the globe to facilitate the daily slaughter of men, women and children to advance agendas of power and profit while ordinary people struggle just to get by in your own country. It can be deeply psychologically uncomfortable to grapple with the reality of what that means for your beliefs about your nation, your society and your very identity, in much the same way realizing you married a manipulative sociopath can be an uncomfortable truth one might feel tempted to compartmentalize away from.

A lot of people got upset about that tweet, but they really shouldn’t have. The tweet was not the problem; it was just a few perception managers for the US military being more honest and straightforward than usual. The problem is that money is being stolen from ordinary Americans to murder strangers on the other side of the planet to advance agendas of power and profit, and everyone’s being propagandized into accepting that as normal. The sociopathic propaganda engine slipping up and stirring the populace from their slumber a bit is nothing to complain about, the actual reality of our actual situation is.