[dropcap]W[/dropcap]ikiLeaks founder Julian Assange, whose courageous publication of leaked documents exposed the crimes and mass surveillance of the US and its allies, is facing a new threat to expel him from Ecuador’s London embassy. He was granted political asylum there in 2012 to protect him from being extradited to the US to face possible life imprisonment, or even execution, on trumped-up espionage or conspiracy charges.

Having already cut off Assange’s internet access and communication with the outside world last March, in an effort to coerce him into leaving the embassy, Ecuadorian President Lenín Moreno has set in motion a pseudo-legal inquisition to provide a cover for his government to repudiate its asylum obligations. 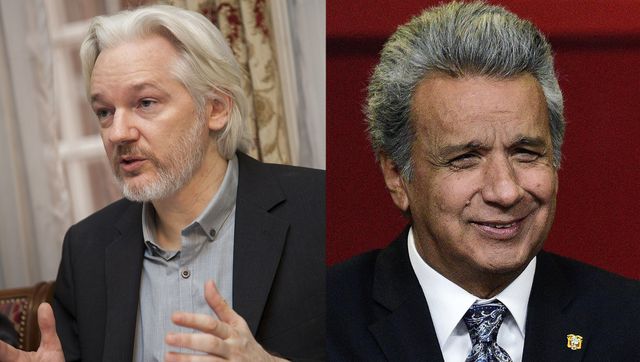 Facing mounting demands from Washington, Moreno’s government has unveiled a “special examination” of Assange’s asylum and citizenship—a process clearly designed to repudiate both. The issue of citizenship is significant because Ecuadorian law forbids extradition of citizens.

On January 3, former Ecuadorian President Rafael Correa, whose government granted Assange asylum, tweeted an image of a letter he received from Ecuador’s State Comptroller General on December 19, notifying him of an investigation by the Dirección Nacional de Auditoria.

Specifically, the “general objective” of the audit is to “determine whether the procedures for granting asylum and naturalization to Julian Assange were carried out in accordance with national and international law.” It will cover the period between January 1, 2012 and September 20, 2018.

Correa, now living in Belgium, was asked to supply information for the inquiry, but no timeline was mentioned, nor any date for the end result. There is no doubt, however, that the timing is directly connected to the escalating economic, financial and political pressure on Ecuador, above all emanating from the US military-intelligence apparatus and political establishment.

WikiLeaks tweeted Correa’s news the same day, pointing to the link between the “special examination” and the Moreno government’s mooted resort to an IMF bailout because of its deepening debts, which have been fueled by falling global oil prices and the dictates of the financial markets.

WikiLeaks reported: “Ecuador has initiated a formal ‘Special Examination’ of Julian Assange’s asylum and nationality (nationals cannot be extradited) as it seeks a $10 billion+ IMF bailout for which the US government demanded handing over Assange and dropping environmental claims against Chevron.”

All the evidence points to the handing over to the US of Assange, effectively the world’s number 1 political prisoner, being a condition set by Washington and the financial elite for the survival of Moreno and his government. The relentless and vindictive operation against Assange is driven by the ruling capitalist class’s determination to silence dissent as it faces the re-emergence of working-class struggles around the world.

WikiLeaks reported: “Ecuador has initiated a formal ‘Special Examination’ of Julian Assange’s asylum and nationality (nationals cannot be extradited) as it seeks a $10 billion+ IMF bailout for which the US government demanded handing over Assange and dropping environmental claims against Chevron.”
Squeezed by lower oil prices and punitive interest rates on its international loans, Moreno has admitted considering an IMF bailout, which would also require savage cost-cutting and further attacks on working class conditions. “Absolutely nothing is off the table,” he told reporters last month when asked about a potential IMF agreement.Any such loan could trigger widespread unrest. Jaime Carrera, director of the watchdog Fiscal Policy Observatory, recently told the Los Angeles Times that the IMF was sure to set onerous conditions, including likely demands that Moreno cut at least 10 percent of the 450,000-strong central government workforce and end all or most of $4 billion in annual fuel subsidies for consumers. “Those reductions will bring a lot of people out into the streets to protest,” Carrera said.

Confronted by this prospect, Moreno has been desperately seeking financing from investment banks and other countries, including China. He visited Beijing last month to discuss re-negotiating repayments on Chinese loans, said to total $6.5 billion.

Like other Latin American countries, Ecuador has been placed in a financial and political vice by the US and the international financial institutions. S&P Global Ratings has imposed junk bond status on Ecuador, with the country’s B- rating one notch below Argentina’s B grade. These ratings mean usurious rates of interest—more than 10 percent—on Ecuador’s sovereign bonds.

In recent months, the US media has highlighted the Chinese debt, as part of its propaganda offensive against Beijing, accusing it of “debt diplomacy” to financially trap poor countries. But Ecuador’s debts also feature US finance houses and conglomerates. The government-owned Petroamazonas oil firm, which produces 80 percent of the country’s oil, owes $3 billion in debts to contractors, including Texas-based oil field services firm Schlumberger.

An IMF team visited Ecuador last year, from June 20 to July 4, and later issued a statement insisting that, while Moreno had moved to embrace the requirements of the financial markets since taking office in April 2017, much harsher measures were needed. Among them were “higher oil prices, temporary tax measures, cuts in capital spending, and a public sector hiring freeze.”

It was no coincidence that US Vice President Mike Pence arrived in Quito at the same time to discuss tightening Ecuador’s economic and military ties with Washington, as well as Assange’s fate. At a press conference in the government palace, Ecuador’s Economy and Finance Minister Richard Martinez said he had spoken with Pence, who also met Moreno, about securing US “support to permit multilateral organisations to generate sources of financing with favourable conditions for Ecuador.”

While Pence and President Donald Trump have been centrally involved in ratcheting up the intense pressure on Ecuador, the Democrats have been the most vehement, repeatedly demanding that the Trump administration force Ecuador to hand over Assange.

Now that the Democrats hold a majority in the US House of Representatives, this agitation is certain to escalate. It forms a pivotal aspect of the drive by the Democrats, working closely with the military-intelligence agencies, to push the White House into a confrontation with Russia as well as China.

Democratic-aligned corporate media outlets have made lurid and absurd allegations that WikiLeaks was part of a nefarious conspiracy with Russian President Vladimir Putin to assist Trump’s 2016 presidential campaign. This is feeding into the witch-hunting investigation by Special Counsel Robert Mueller, formerly a long-time FBI director, into alleged Russian interference in the 2016 election.

At the centre of these accusations are leaked emails proving that the Democratic National Committee sought to undermine the so-called “democratic socialist” Bernie Sanders and ensure that Hillary Clinton became the Democratic Party’s presidential candidate. They also included the texts of speeches Clinton gave to corporate audiences pledging support to Wall Street and boasting of her role in organising the barbaric US-led war on Libya in 2011.

Significantly, the new threat to Assange follows the collapse of the latest smear campaign: December’s much-headlined claim by the Guardian that Trump’s former campaign manager Paul Manafort held secret talks with Assange inside the Ecuadorian embassy in London.

Five weeks on, as the Intercept’s Glenn Greenwald reported on January 3, the Guardian ’s editor-in-chief Kath Viner and the chief author of the claim, Luke Harding, have refused repeated requests to respond to the exposure of the obvious falsifications and contradictions in the report. The claims have been categorically refuted by Manafort, WikiLeaks and former Ecuadorian embassy staff.

The World Socialist Web Site and the Socialist Equality Parties internationally are conducting a campaign in the working class and among youth to defend Assange and WikiLeaks. This is an absolutely essential issue in the fight to defend free speech against the intensifying repression and censorship of capitalist governments and corporate giants, such as Google and Facebook, aimed at silencing and isolating anti-war and anti-capitalist dissent.

As part of that struggle, the SEP in Australia, where Assange remains a citizen, will organise and seek the broadest support for political demonstrations in Sydney on March 3 and Melbourne on March 10. The rallies will demand that the Australian government end its collaboration with the US-led persecution of Assange and immediately intervene, using all its diplomatic and legal powers, to insist that the British government allow the WikiLeaks publisher to leave the Ecuadorian embassy and unconditionally return to Australia, if he chooses to do so, with a guarantee against extradition to the US.

Polling on the Border Wall