Home ABOMINATIONS Markos Moulitsas and the Daily Cult: the Nadir of Journalism; the Death of Activism

Markos Moulitsas and the Daily Cult: the Nadir of Journalism; the Death of Activism 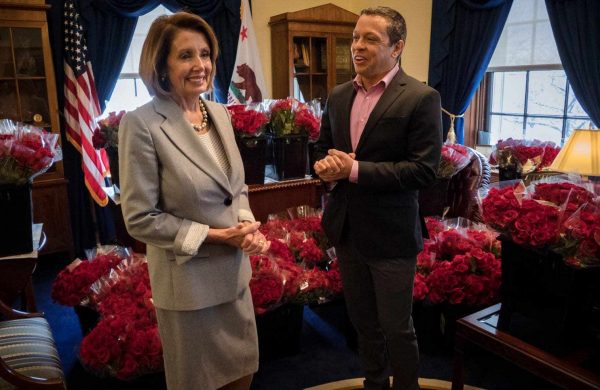 Daily Kos' Markos Moulitsas presenting flowers to Pelosi. The WaPo editors chose this pic to illustrate something they think admirable, but it actually shows the Daily Kos bankruptcy as a platform for any progressive, let alone intelligent politics. As Splinternews.com aptly opined, the DK chief spent more than $83,000 for what is essentially a photo op.

A brilliant dissection by the editor of Ghion Journal
Every time I think it can’t get any worse when it comes to the cult of personality society has become, I’m proven wrong by the latest political development. Jumping sharks have become the norm as carnival barkers wearing the guise of journalists and courtiers pretending to be activists are engaged in a persistent race to the bottom of absurdity.

"This is why his humiliating outreach to Nancy Pelosi is such an affront; instead of speaking truth to power, Moulitsas chose to literally throw roses at the status quo..."

Two days ago, Markos Moulitsas, the founder of the Daily Kos, galvanized his massive netroots following to purchase 25,000 roses for House Speaker Nancy Pelosi. When I first saw the headline on Facebook, I really thought that some enterprising satirist [had] used Photoshop to take a swipe at Moulitsas. It took a tweet from Glenn Greenwald lambasting this most outlandish story for me to realize that this embarrassing event actually took place. Not only did Moulitsas proudly proclaim this moronic stunt, he actually pinned the story on his Twitter timeline like it’s something to be proud of. (See below)

The Daily Kos was founded on the principle of “crashing the gates” and shaking up entrenched political interests. Moulitsas rose to prominence by pretending to be against the establishment and feigning outrage at the grotesque domestic and foreign policies of the Bush administration. The Daily Kos quickly became the Drudge Report of the left, claiming to receive over 2.5 million unique visitors a day, it is one of the most powerful political blogs in the world. In reality, Moulitsas was a rank opportunist who saw an opening to be the Rush Limbaugh of the left.

Moulitsas was at the forefront of “news as you want it”; by catering to ideology and identity above everything else, he elevated his stature while taking a sledge hammer to journalism. This is why his humiliating outreach to Nancy Pelosi is such an affront; instead of speaking truth to power, Moulitsas chose to literally throw roses at the status quo.

Worse than the actions of one charlatan is the fact that Moulitsas convinced his legion of followers to kick in their hard earned money to purchase at least $100,000 worth flowers on behalf of a kleptocrat who is worth more than $100,000,000. This is endemic of our time; political idolatry is turning the proletariat into the foundation of the plutocracy—they call us their base for a reason. When it comes to people turning themselves into the bases of politicians, the Daily Kos is the golden calf standard of fetishizing politics.#DailyCult Click To Tweet

(BELOW: DK's Moulitsas boasting about his moment  of misconceived glory. But hey, who among the Cossacks is complaining? )

The @DailyKos community bought 25,000 roses for @SpeakerPelosi, and I had the honor of delivering about 7,000 of them. The other 18,000 were donated by the Speaker to Walter Reed hospital, will be delivered tomorrow! pic.twitter.com/tzOIosnA88

In all honesty, the Daily Kos is the extreme of what has become par for the course when it comes to journalism and political activism. Speaking half-truths and situational morality is an epidemic that has destroyed fact-based reporting and supplanted it with agenda driven pablum. There is a reason for this of course, there is money to be made by indulging people’s preconceived notions and fostering group think.

More and more journalists are endeavoring in this insidious practice of customizing their reporting to the preferences of their demographics. This is why the same people who were outraged when Bush was bombing Baghdad were silent while Obama was obliterating Damascus. This is also the same reason why people who were outraged about Obama’s imperial presidency are all of a sudden infatuated with Trump taking a blowtorch to the Constitution and the rule of law.

There is a heavy price to pay for this level of obsequiousness to political ideology. While charlatans like Moulitsas smile and preen with the very politicians they are supposed to be keeping in check and get paid handsomely for their hypocrisy, truth and consistency get nullified in the process. But then again, for too many at the Daily Kos and political junkies throughout America, what matters is not justice but that their team wins and the other side loses.

“It is hard to free fools from the chains they revere.” ~ Voltaire

If you appreciated this independent analysis and believe that journalism should be free of corporate/big money influence, consider making a contribution to the writer by clicking on the tip box below. The Ghion Journal is a corporate free zone, we do not take a penny from corporations nor do we raise money by selling ad space. We depend on the support and empowerment of our readers. The tip box is a way of compensating the writers of Ghion Journal for their work. 100% of the proceeds from the tip jar goes to the individual writers of the articles you are reading. Click on the picture below to contribute as you are able. Thank you for giving us a voice so that we can continue to speak truth to power.

Teodrose Fikre is the Founder and chief editor of Ghion Journal. A published author and prolific writer, a once defense consultant was profoundly changed by a two-year journey of hardship and struggle. Going from a life of upper-middle class privilege to a time spent with the huddled masses taught Teodrose a valuable lesson in the essence of togetherness and the need to speak against injustice.

Is this a Yellow Vest Spring, a Eurozone Spring, or just holiday-related stress relief?