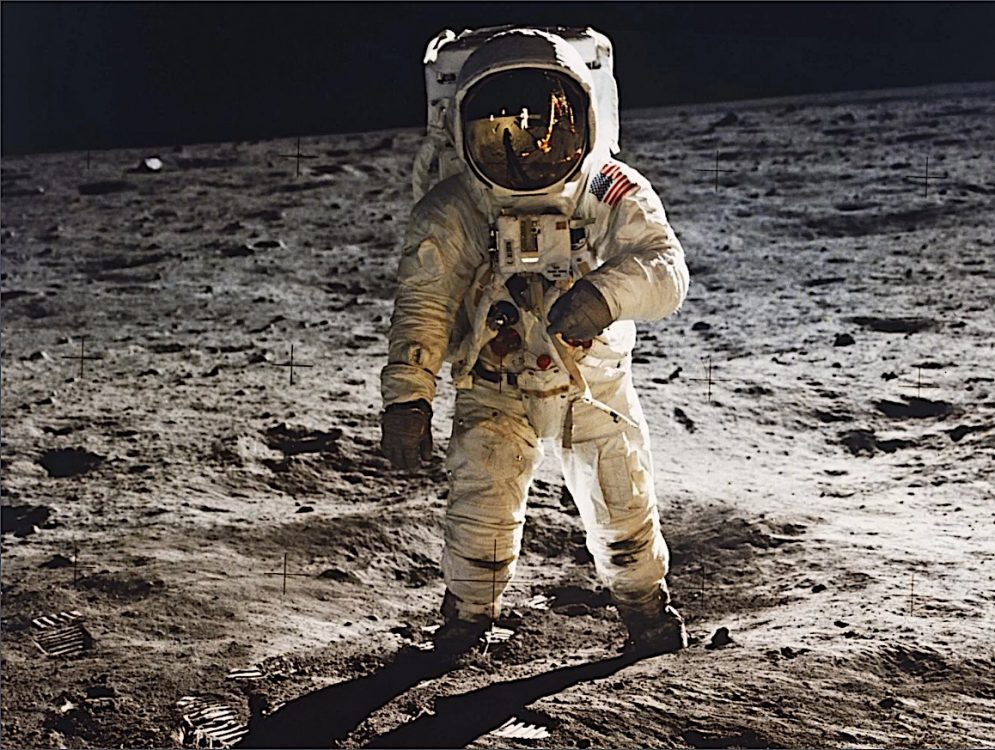 Apollo 11 astronaut Buzz Aldrin walks on the moon in July 1969 in this Photo snapped by Neil Armstrong. Credit: NASA

[su_panel background="#ebf0f5" radius="7"]  We live in interesting and highly confusing times. As americans have become more and more aware of government lies and its monstrous crimes, and the mainstream media continues to place layer upon layer of disinformaiton on their consciousness, a healthy level of skepticism has arisen. This fringe segment of the population includes many ideas and interpetations of history. Some are the demonstrable truth. Others are simply expressions of infantile imaginations or lunacy. Despite the fact that many skeptics are on firm ground as far as historical truth is concerned, the government version being a fabrication, the establishment hacks have tarnished them all with the label "Conspiracy theorist", all the easier to dismiss them. Below a report filed by a man who believes in the US moon landings, Tariq Malik, who is also Space.com Managing Editor , and is obviously in the majority. As for the TGP editors, we tend to believe the moon landings but we also believe it could have been an elaborate hoax—it is well within the fantasy-making capabiltiies of the system. So we are simply not sure any more. Too much has happened. Thus, as the Scots say, the verdict in our case is "Not proven"—either way. —PG [/su_panel]

Even Moon landing hoaxers toe the party line. Who knew? A study reported on by our sister site LiveScience reveals that the polarizing rift between Democrats and Republicans hits conspiracy theorists, too. The report by Bad Science debunker Ben Radford states:

As one might expect, the more far-out the conspiracy theory, the fewer people endorse it. Dean Debnam, president of Public Policy Polling, which conducted the research, noted, "Most Americans reject the wackier ideas out there about fake moon landings and shape-shifting lizards."

Even so, 20 percent of Republicans believe that President Obama is the Anti-Christ, compared with 13 percent of Independents and 6 percent of Democrats who agree.

AND NOW, FOR THE PROMISED INTERVIEW WITH A NONBELIEVER—EMANUEL GARCIA

Listen to "Empire-Episode40-EmanuelGarcia" on Spreaker.

Pushing back against the imperial censors: Taking NewsGuard at its word.

The Integrity Initiative was involved in the Skripals Incident