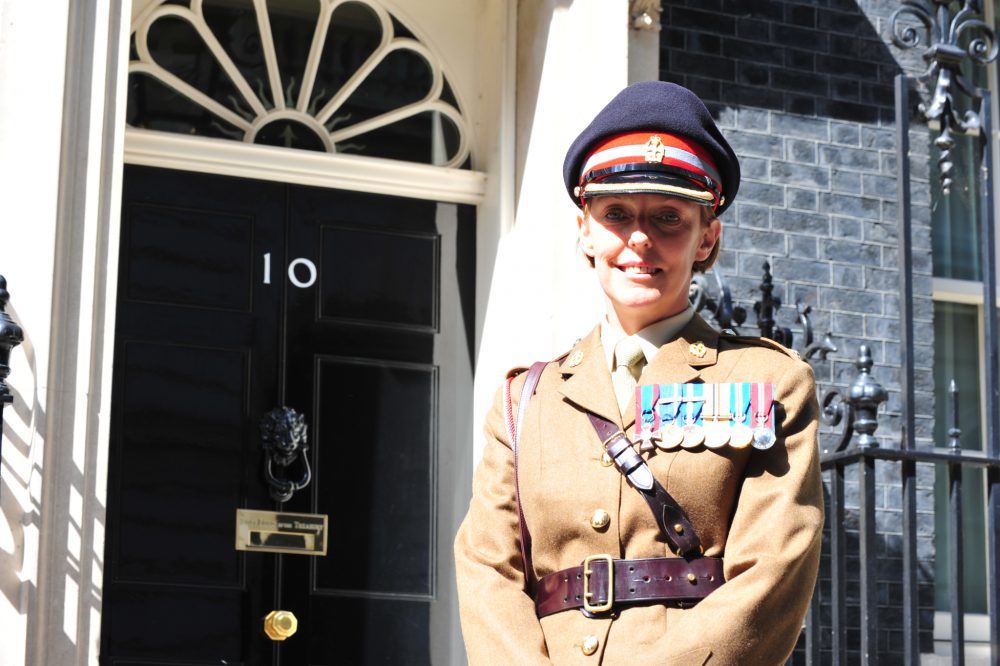 Colonel McCourt at Downing Street 10 via QARANAC Association. A loyal and probably unquestioning servant of the Anglo-American establishment, now key to the explanation of the Skripal hoax.

On March 4 2018 the British/Russian double agent Sergei Skripal and his daughter Yulia were found incapacitated on a bench in Salisbury. The British government asserts that they were affected by a chemical poison of the so called Novichok group. The case led to a diplomatic conflict as Britain accused Russia of an attempt to kill the Skripals. No evidence was provided by the British government to support those accusations. The Skripals have since been vanished.

Today an intriguing new detail of the case came to light. Spire FM, a local radio station in Salisbury, reports of a young woman, Abigail McCourt, who was given a 'Lifesaver Award' for her involvement in the Skripal case:

The 16 year old, from Larkhill, was the first to spot two people collapsed on a bench in the Maltings on March 4th and didn't hesitate to help. Abigail quickly alerted her mum, a qualified nurse, who was nearby and together they gave first aid to the victims until paramedics arrived.It soon became clear this was no ordinary medical incident, but the poisoning of a former Russian spy Sergei Skripal, and his daughter Yulia, with Novichok.
...
Immediately following the incident and with the world's media focused on Salisbury, the pair didn't want any want press attention and kept their involvement quiet.

But Abby's mum now feels the time is right for her daughter to be recognised for the "incredible" way she dealt with the scenario. Alison nominated her for the Lifesaver Award at Spire FM's Local Hero Awards, and the judges were unanimous in their decision that Abigail was a very worthy winner.

Earlier reports mentioned that a 'military nurse' had attended to the Skripals. Following the above report Elena Evdokimova checked the name of the young woman's mothers and found a curiosity:

Elena Evdokimova @elenaevdokimov7 - 10:50 utc - 19 Jan 2019We were right, it was Alison McCourt who was that"unknown military nurse" who, absolutely randomly, happened to be near the bench where #Skripals collapsed . Spire FM alleges that it was her daughter Abigail alerted her, but no one mentioned her before ...

Here is the thing. Alison McCourt is not just one random 'off-duty army nurse'. She is the Chief Nursing Officer for the British Army in the rank of Colonel:

Colonel McCourt was appointed Chief Nursing Officer on February 1 2018, just one month before the Skripal incident happened. Colonel McCourt lives in Larkhill, a garrison town some 11 miles from Salisbury. She is known to visit elsewhere. 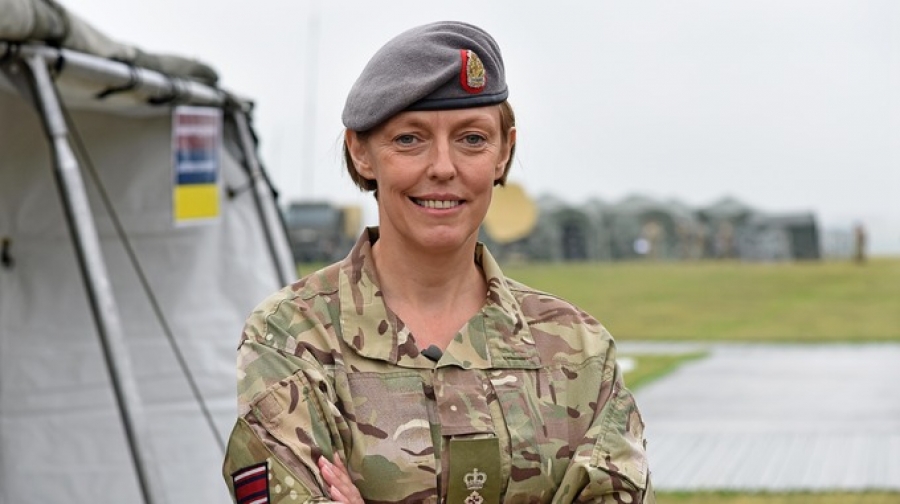 Alison McCourt with her daughter Abigal receiving the Livesaver Award

There is a discrepancy between the Spire FM report and Alison McCourt's narrative of the event in the video posted with the Spire report. The written report only mentions Abigal McCourt and her mother. But in the video the mother speaks of "Abigal and the rest of our family" who were the first to arrive at the Skripal poisoning scene. She continues to contrast "Abigal" and "we" and later again "Abigal" and "the rest of us" meaning that there were more persons on the scene than just the mother and the daughter. In a recorded interview at the bottom of the Spire FM page Abigal says that it was her brothers birthday and that "we" were out celebrating it. (She also mentions that "the woman [Yulia Skripal] was not breathing at the time we found her." How then could she vomit?)

In 2014 the Daily Mail reported (video) on Colonel Alison McCourt's deployment as British mission leader to Sierra Leone where she helped to fight the highly infectious Ebola disease. According to that report McCourt is married and has two children. Her son must by now be fourteen. There is no further information available about her husband. 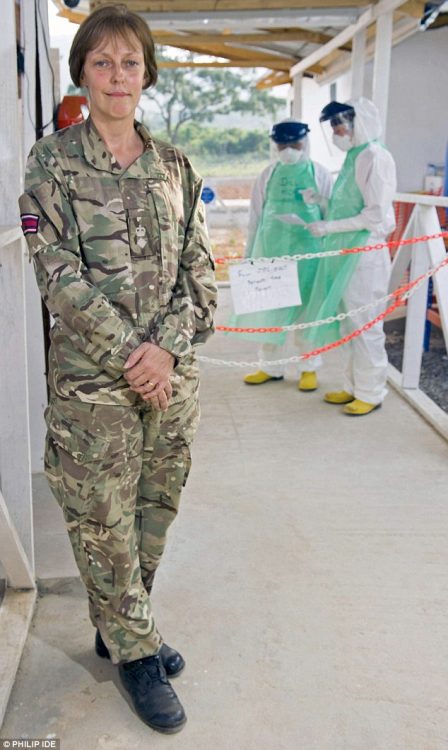 McCourt went to Africa as part of assignment to fight Ebola.

Neither Colonel McCourt nor her daughter were affected by the extremely dangerous Novichok with which the Skripals were allegedly poisoned. But what about the other persons, her son and her husband, who were also at the scene? What were they doing?

No additional information about the McCourts has so far come to light.

Isn't it an extremely unlikely coincidence that the first person who 'by chance' attends to the Skripals is the top nurse of the British army? An experienced officer, highly connected, who is also know for handling highly infectious patients? Who wrote the script for this enthralling saga (rec.)?

This is one of the many, many 'coincidences', curiosities and lies that make the official Skripal poisoning narrative so unbelievable.

There are also many indications that the case is related to other British government operations. Indeed the whole Skripal incident might well have been staged.

Pablo Miller, the MI6 agent who recruited, handled and befriended Sergei Skripal, also worked for Orbis Ltd. Orbis is the company of the 'former' MI6 agent Christopher Steele who was paid by the Hillary Clinton campaign to write the 'Dirty Dossier' about alleged Trump connections to Moscow. Soon after the Skripal incident happened, the British government released a D-Notice that prohibited British media from further mentioning Pablo Miller's name and thereby the relation of the two cases. 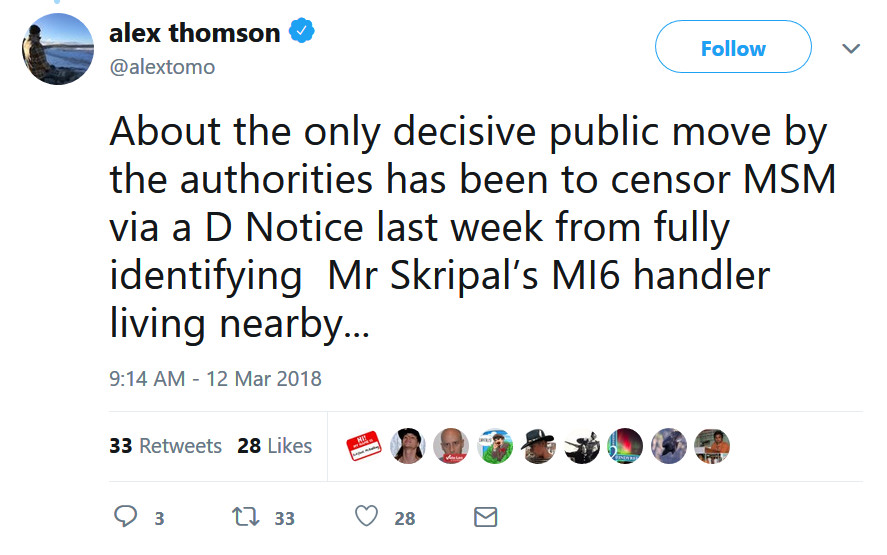 Long before the Skripal incident happened an experienced Russia scholar asserted that the Steele dossier was written by someone trained by Soviet intelligence. It is thus quite possible that Sergej Skripal, the former Russian spy, was an informant or even author of the Steele dossier about Trump.

There is additional suspicion that the Integrity Initiative, whose primary function is to stoke Russophobia, was one of the brains behind the Skripal incident.

The Initiative was also involved in the Steele dossier and the russophobic anti-Trump campaign. Andrew Wood, a former British ambassador to Moscow, is employed by the Institute for Statecraft, the shadowy parent organization of the Integrity Initiative funded by the Ministry of Defense and Foreign Office. It was Andrew Wood who helped to disseminate the Steele dossier to U.S. Senator John McCain. McCain then gave the dossier to FBI Director James Comey. The FBI used the dossier first to get FISA warrants to spy on the Trump campaign, and, after Comey was fired, to launch a counter-intelligence investigation (section 3) against Trump himself.

Here is a theory how all this may come together. Back in 2015 the Institute of Statecraftand its russophobic director Colonel Donnelly discussed how to increase sanctions on Russia. In 2016 the Steele dossier was created in an attempt to connect Trump to Russia. Steele's colleague Pablo Miller and his spy Sergei Skripal were quite likely involved in creating the dossier. The dossier was disseminated with the help of Donnelly's Institute of Statecraft.

For some reason the Skripals had to be taken out. Sergei Skripal probably threatened to spill the beans about the dossier after it became public.  The highly scripted 'Novichok' incident in Salisbury was staged to remove Skripal and to smear Russia with an alleged murder attempt. Colonel McCourt, the trusted army nurse, was asked to help on the scene. After the Skripal incident, and with no evidence shown, Russia was blamed and massive sanctions followed. The Integrity Initiative, the propaganda arm of the Institute of Statecraft, analyzes the media results of the Skripal affair and continues to stoke the anti-Russia campaign.

It might be possible that Steele's 'dirty dossier', the Skripal case and the Integrity Initiativeoperation are unrelated. But that chance for that now tends towards zero.

About the Author
"b" is the nom de guerre of Bernhard, a German journalist who is also founding editor of Moon of Alabama.

The Empire Files: Trump is Expanding the US Empire