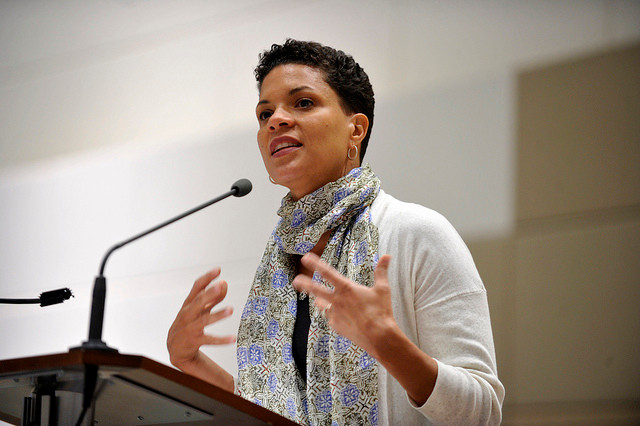 Two weeks ago the Zionist lobby targeted civil rights activist Angela Davis for her support of the Boycott-Divestment-Sanctions movement (BDS). Following lobby pressure the Birmingham Civil Rights Institute in Alabama canceled its annual gala at which Davis was to receive a prestigious human rights award. This created a huge backlash. The city council of Birmingham unanimously adopted a resolution "recognizing the life work of Angela Davis". The Institute's chair, vice-chair and secretary had to resign from the board.

Following that scandal the gates of hell opened and, on Sunday, the New York Times published a column that criticized the Apartheid policy of the Zionist entity in the Middle East. 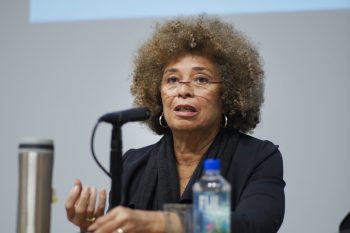 Time to Break the Silence on Palestine
Martin Luther King Jr. courageously spoke out about the Vietnam War. We must do the same when it comes to this grave injustice of our time.

Written by Michelle Alexander, a civil rights lawyer, author of The New Jim Crow, and now a regular NYT columnist, the piece reaches back to Martin Luther King. It compares MLK's courageous early opposition to the Vietnam War to today's reluctance of people who are 'progressives except for Palestine' to oppose the policies of the so called Jewish State:

It was a lonely, moral stance. And it cost him. But it set an example of what is required of us if we are to honor our deepest values in times of crisis, even when silence would better serve our personal interests or the communities and causes we hold most dear. It’s what I think about when I go over the excuses and rationalizations that have kept me largely silent on one of the great moral challenges of our time: the crisis in Israel-Palestine.

The associated gala event, scheduled for February 16th at Haven has been cancelled. Ticket purchasers will received a full refund. pic.twitter.com/YKrt6nfnzK

Alexander appeals to those who support civil rights to speak out against the Zionist Apartheid policies:

We must not tolerate Israel’s refusal even to discuss the right of Palestinian refugees to return to their homes, as prescribed by United Nations resolutions, and we ought to question the U.S. government funds that have supported multiple hostilities and thousands of civilian casualties in Gaza, as well as the $38 billion the U.S. government has pledged in military support to Israel.

And finally, we must, with as much courage and conviction as we can muster, speak out against the system of legal discrimination that exists inside Israel, a system complete with, according to Adalah, the Legal Center for Arab Minority Rights in Israel, more than 50 laws that discriminate against Palestinians — such as the new nation-state law that says explicitly that only Jewish Israelis have the right of self-determination in Israel, ignoring the rights of the Arab minority that makes up 21 percent of the population.

The column goes on to describe how the movement for the rights of Palestinians is growing, and how those who support it come under pressure. The well written piece closes with a promise to follow up on the issue:

I cannot say for certain that King would applaud Birmingham for its zealous defense of Angela Davis’s solidarity with Palestinian people. But I do. In this new year, I aim to speak with greater courage and conviction about injustices beyond our borders, particularly those that are funded by our government, and stand in solidarity with struggles for democracy and freedom. My conscience leaves me no other choice.

The Zionist lobby will surely try to press the New York Times, which usually advances absurdly pro-Zionist positions, to fire Michelle Alexander or to at least censor what she writes. If neither happens the lobby will have a big problem.

The column, and that fact that it was published by the New York Times, changes the Overton window on Palestine. Positions that were earlier condemned or smeared as anti-semitic, will now become discussable.

But the real problem for the Zionist lobby is even larger. If the civil rights movement follows Davis and Alexander and actively supports pro-Palestinian positions, it will influence the political position of the Democratic party and the general position of the United States towards Israel. Democratic candidates that are 'progressives except for Palestine' or like Kamala Harris more AIPAC than J Street, will become unelectable. Sure, it will take some years to take effect. But it's a sea change.

The reactions by the Lobby reveal its fear. The Israeli ambassador attempted to pinkwash the issue:

David M. Friedman @USAmbIsrael - 17:42 utc - 20 Jan 2019
Michelle Alexander has it all wrong in today’s @NYT. If MLK were alive today I think he would be very proud of his robust support for the State of Israel. An Arab in the ME who is gay, a woman, a Christian, or seeking education & self-improvement can’t do better than living in Israel

Friedman's predecessor as ambassador, now the Israeli deputy minister in charge of public diplomacy, responded with a more brutal position:

Michael Oren @DrMichaelOren - 18:16 utc - 20 Jan 2019
Replying to @USAmbIsrael @NYT
Ambassador Friedman is right but Israel has to take serious steps to defend itself. By equating support for Israel with support for the Vietnam War and opposition to MLK, Alexander dangerously delegitimizates us. It’s a strategic threat and Israel must treat it as such.

Oren is in charge of the Israeli lobby organizations revealed in the four part movie The Lobby USA:

To get unprecedented access to the Israel lobby’s inner workings, undercover reporter “Tony” posed as a pro-Israel volunteer in Washington.  The resulting film exposes the efforts of Israel and its lobbyists to spy on, smear and intimidate US citizens who support Palestinian human rights, especially BDS – the boycott, divestment and sanctions movement.

It shows that Israel’s semi-covert black-ops government agency, the Ministry of Strategic Affairs, is operating this effort in collusion with an extensive network of US-based organizations.

Published on Nov 3, 2018
Episode 1: The Covert War. This video is posted here for news reporting purposes. To learn more about this, or to read the stories to which it is associated, visit: https://bit.ly/LobbyLeaks

That Oren calls Alexander a 'strategic threat' means that she must be destroyed. Oren will use all his might and secret organizations to defeat the 'threat'. The Zionists will surely pull out the big guns against her. They will smear, intimidate and harass Alexander. The will threaten the NYT with 'consequences'.

The Lobby P3: An Anti-Semitic Trope - Al Jazeera Investigations In part three of The Lobby, our undercover reporter travels to the Labour Party Conference, revealing how accusations of anti-Semitism by group within Labour targeted Israel critics and saw some investigated.

In part four of The Lobby, the senior political officer at the Israeli Embassy in London discusses a potential plot to 'take down' British politicians – including a Minster of State at the Foreign office who supports Palestinian civil rights.