Home ABOMINATIONS Venezuela – An Appeal to Russia, China and all Unaligned Countries for Support of Sovereign Venezuela

Venezuela – An Appeal to Russia, China and all Unaligned Countries for Support of Sovereign Venezuela 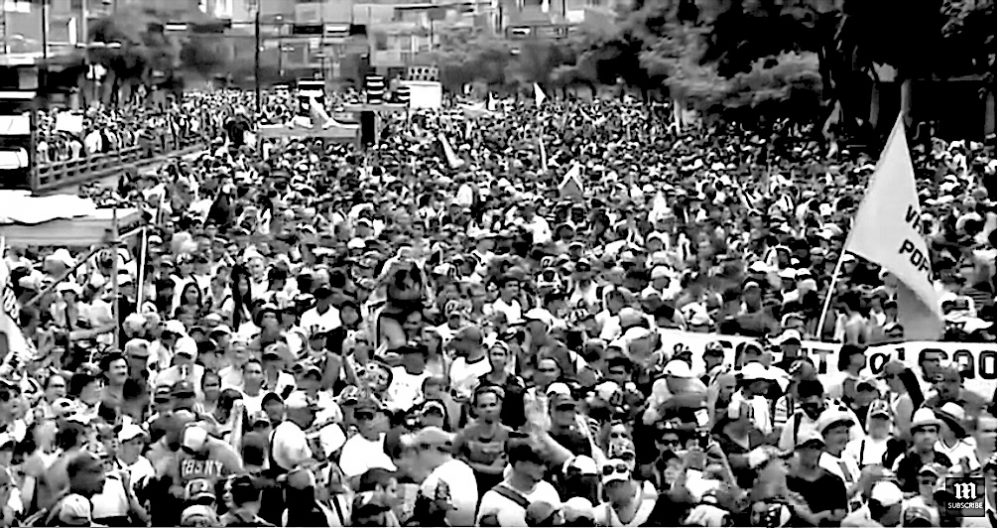 [dropcap]O[/dropcap]n 23 January 2018, the United States initiated a coup against President Nicolás Maduro and his Government, by encouraging and fully supporting the “self-proclaimed” opposition leader, Juan Guaido, as interim President. Already days ago he had received the full support of President Trump, and today, in a special televised speech, US Vice-president Mike Pence declared that Venezuela’s Freedom begins with the new interim president, Juan Guaído  https://www.foxbusiness.com/politics/venezuela-established-its-freedom-with-new-interim-president-juan-guaido-vice-president-mike-pence .   (See our special ADDENDUM at the bottom of the article.)

[This is the moronic but perfectly “natural” tweet by Trump, as the empire’s brutal CEO, endorsing the new rebel leader according to Washington’s carefully plotted coup scenario. The crocodile tears are shopworn, but they are still sickening in their thick hypocrisy. ]

The citizens of Venezuela have suffered for too long at the hands of the illegitimate Maduro regime. Today, I have officially recognized the President of the Venezuelan National Assembly, Juan Guaido, as the Interim President of Venezuela. https://t.co/WItWPiG9jK

RT reports that “the Venezuelan military will not accept a president imposed by ‘dark interests’, Defense Minister Vladimir Padrino said after Washington and a number of its allies recognized a lawmaker [Juan Guaído] as the new leader in Caracas.”

“The army will continue to defend the constitution and national sovereignty, Padrino said on Wednesday afternoon, hours after opposition lawmaker Juan Guaido was proclaimed interim president by the National Assembly, in a direct challenge to President Nicolas Maduro.”

Washington’s immediate recognition of Guaido as Venezuelan’s legitimate leader, was instantly followed by the Organization of American States (OAS), as well as Canada and France. Mexico apparently has declines to do so “for now”. Is the “for now” an indication that Lopez Obrador’s actions are already being controlled by Washington?

May they use their diplomatic leverage, and if that does not work on Washington’s ‘savages’ – use other means that the empire understands. Keeping Venezuela free from the yoke of the US and its vassal allies – is essential for all the people in Latin America who have already been subjected to US implanted subjugating and abusing dictators, who not only have ruined their countries’ economies, but created extreme poverty where there was prosperity before, i.e. Argentina, Brazil, Ecuador, Peru, Colombia, Paraguay, Uruguay – and Chile, which is well on her way to an economic and social demise.

Venezuela must stay and remain tall.

President Putin and Jinping – please do whatever you can and whatever you must, to stop the US bulldozer from overtaking Venezuela! 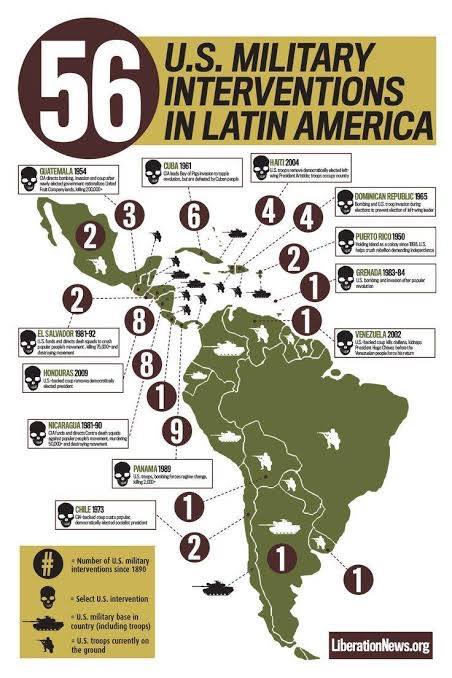 [dropcap]O[/dropcap]ngoing unrest in the streets of Caracas and major Venezuelan cities, all inspired and fueled on by the United States, and also the OAS (Organization of American States), the Club of Lima (except for Mexico), its European puppet allies, is confusing and dividing the people and has already killed at least 16. It is not clear who is responsible for the killing, but undoubtedly opposition forces funded by outside sources and / or the Fifth Column (inside Venezuela) have a bloody hand in the Venezuelan violence. A western instigated civil war is a real risk.

[dropcap]T[/dropcap]his coup attempt is an abject illegal interference in another country’s sovereignty, with the ultimate violent and vicious goal that Washington has been practicing over the past 100 years around the globe – and ever with more impunity – of “regime change” to steal a non-conforming, non-submissive government’s resources, and of course, to reach eventually the ultimate goal of full spectrum world dominance. Venezuela has by far the world’s largest known hydrocarbon (petrol and gas) reserves which is two days of shipping time away from Texas oil refineries, versus the Arabian Gulf from where today the US imports 60% of its petrol – a shipping time of 40-45 days, higher shipping costs, plus the risk of having to sail through the Iran-controlled Gulf of Hormuz.

In addition, Washington cannot tolerate any socialist country, let alone, one that is located in what Washington considers its backyard, like Venezuela, or, for that matter Cuba, Nicaragua and Bolivia. The other left-leaning South American country, Ecuador, has recently been “converted” with an internal “soft” coup, aka fake or manipulated elections. Those are usually operated through strong Fifth Columns funded from abroad – and with substantial menaces, including death threats.

So, Washington is dead set, especially with Trump and Pompeo at the apparent helm, to openly propagate a US (and allied, including NATO) invasion of Venezuela to “free” their “oppressed” people; to bring them from one of the only true democracies in the world (quote by Chomsky and the international election supervising US Carter Institute, among others) under the usurping dictatorial protection of the United States of America. Venezuelans will not tolerate such a farce. The 6 million Venezuelans who stood solidly behind Nicolas Maduro when they voted for him in May 2018, have already stood up – and will continue defending their freely and democratically elected President, despite the western media’s fake images of “tens of thousands” in the streets of Caracas demonstrating against legitimate President Maduro and for the self-proclaimed “interim president”, Juan Guaído.

He is, in fact, a criminal who acts totally against Venezuela’s Constitution on which he swore his allegiance to the country when he took up a seat in the Venezuelan parliament. It is clear that this “mass-movement”, as depicted by western media, was organized from outside, possibly paid for by US sponsored “NGOs” – and Venezuelan “insiders”, covert or openly from the opposition, trained by the CIA and other infiltrated US secret service groups. Clearly the Fifth Column is and was at work in Venezuela for years, bringing about the downfall of the economy by monetary and oil price manipulation from outside and from within; and by diverting food and medicine shipments from being delivered to supermarkets and instead being transferred as contraband into Colombia, where they are sold at dollar-manipulated inflated local currencies. —- This coup attempt reminds so much of another US State Department instigated but failed overthrow in April 2002 against President Hugo Chavez. The coup was botched by the Venezuelan military and the people of Venezuela. President Chavez was reinstated within 2 days. And the present coup so far has also failed.

It’s the latest U.S. slap at the regime of Nicolas Maduro https://t.co/kLJjZjK3vZ

President Maduro’s decision to break diplomatic relations with the US is therefore, not only logical, but totally legal. He has given all US diplomats 72 hours to leave the country. Now comes the other ‘coup’ – the US refuses to accept the legal expulsion of their diplomats from Caracas, because the self-proclaimed and US recognized “interim president” has called for all diplomats, first of all those from Washington, to stay in the country. Pompeo is threatening Venezuela for any harm that may happen to US citizens, including diplomats, during this uprising and what they consider “change of government”.

Here is Pompeo’s statement with regard to diplomatic relations with Venezuela.  Stay tuned to how this crisis will unfold.

May Venezuela’s friends and allies put all their might, diplomatic and other, at the support of Venezuela’s freedom and sovereignty.

In the thread below, You will find scores of CIA bots with no real names & no profile photos some of whom claim to live (!) in Venezuela but rather write perfect English and claim I am lying and the photo is fake..which is not. You can check for yourself on reverse image. https://t.co/zjsGUCEiff

THE VASSAL EU JOINS IN THE COWARDLY MUGGING OF VENEZUELA
2. The European Union gives Maduro’s opposition the “Sakharov Prize” . Even the sanctimonious Brussels technocrats are happy to join the putschist bandwagon. 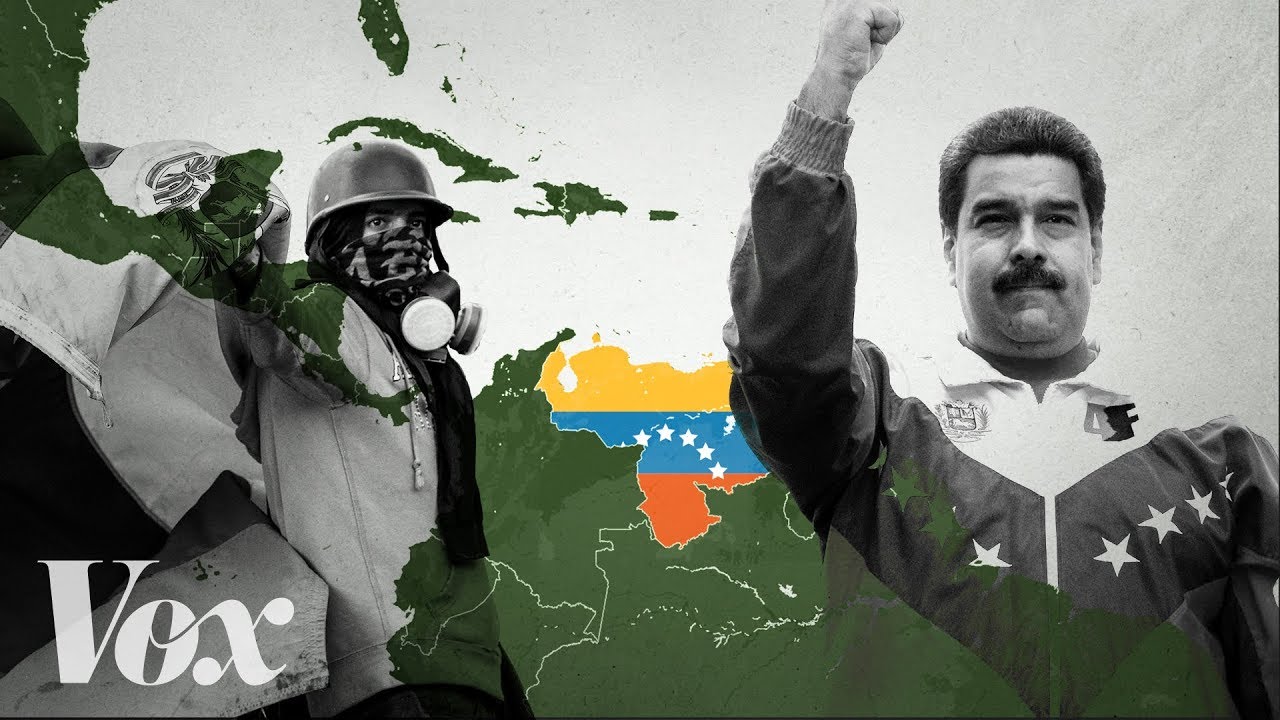 3. COLLAPSE OF VENEZUELA, “EXPLAINED”
VOX, an underhanded made-for-hybrid-disinformation outfit headed by former WaPo journo Ezra Klein, and backed up by ample funds from the usual shady sources, and the State Department, weighs in with this “helpful” explanation of the inevitable collapse of Venezuela—because of her socialism. (Filed 8.25.17) This single report has trapped more than 3 million views. 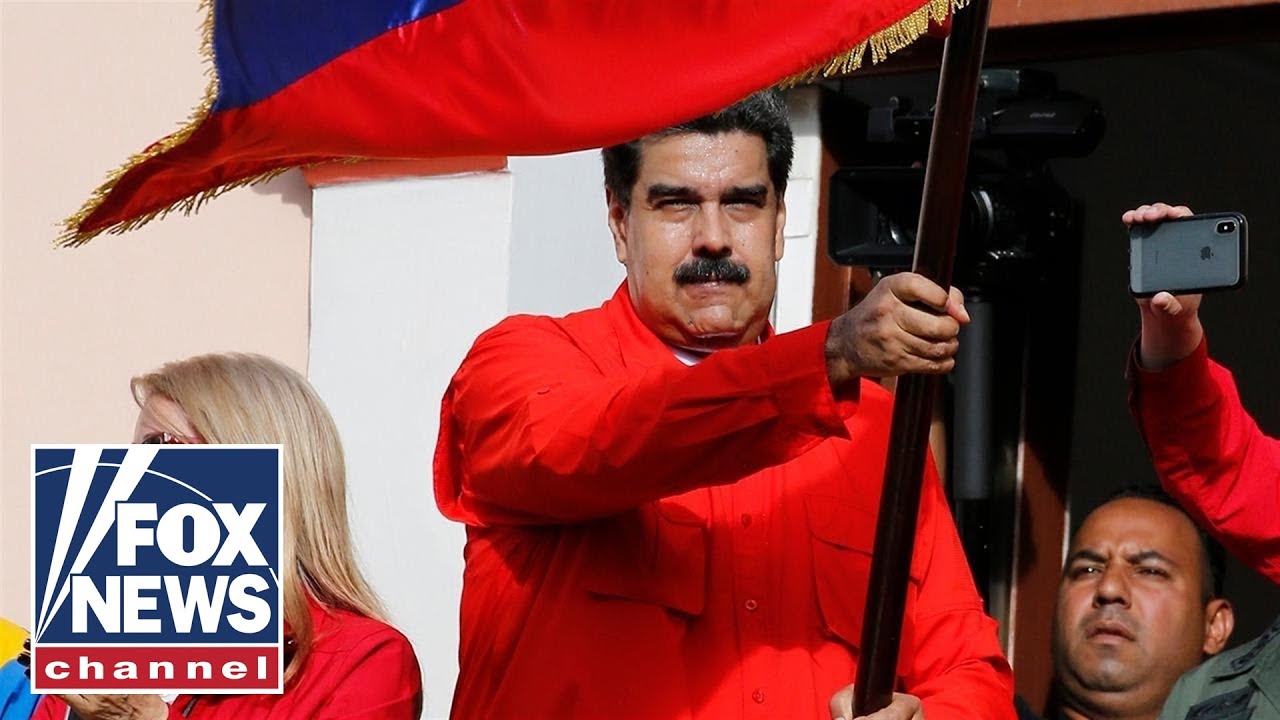 4. FOX NEWS “COVERAGE” OF THE CRISIS
With the economy screaming thanks to US sanctions and internal business sabotage, the middle class and the usual least politically conscious sectors of the population are obviously backing a change of government. We saw that during the coup against Chile’s president Allende, in 1973.

Venezuelan president Nicolas Maduro is likely to be re-elected Sunday despite an escalating economic and humanitarian crisis in the country. CBSN contributor and Signal newsletter writer for GZERO Media, Alex Kliment, explains how dictators like Maduro remain in power despite their people’s suffering.

ANOTHER PSEUDO EXPLANATION, THIS ONE BY CBS NEWS, ONE OF THE “BIG 3” AND THE “TIFFANY NETWORK”. CBS is dominated by mainstream imperialist liberals, now affiliated with the Deep State/Democrat wing of the ruling class and engaged in an obsessive battle with Donald Trump, for which they castigate him constantly. This time, when Trump is essentially committing an imperialist crime, their voices are muted or mouthing approval.  Note how CBS arrogantly proclaims Maduro a “dictator” and brings an “expert” to prove it. (As if the imperial media cared one iota for freedom or democracy or peace, for that matter, anywhere.) Italics ours. 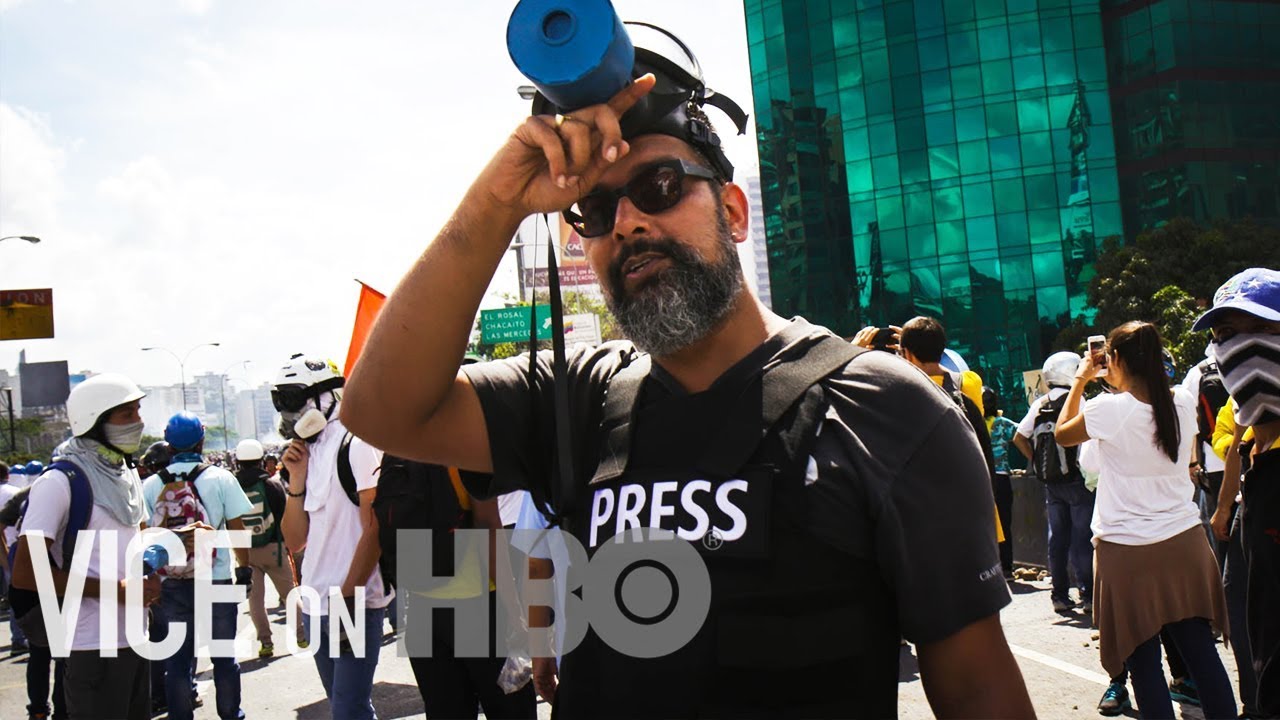 In early 2017 Venezuelan President Nicolás Maduro announced moves that would turn the world’s most oil-rich nation from a democracy into a dictatorship. This sparked a crisis, igniting longstanding anger over inequality, misrule, hunger and crime. VICE founder Suroosh Alvi and correspondent Ben Anderson traveled to Venezuela as Maduro seized the country’s political institutions with an alleged “sham election” and violently suppressed growing opposition to his rule.

VICE NEWS (HBO/BILL MAHER PRODUCTIONS) WEIGHS IN WITH HEAVY DISTORTIONS. A fine example of imperialist propaganda. VICE has produced many “documentaries” on Venezuela (and Nicaragua), invariably hostile to the Bolivarian revolution. Just read below the openly biased and inflammatory way in which VICE even introduces its report. This outfit alone has more than 4 million subscribers on YouTube. Disinformation, in the hands of experts, works. The correspondent says, gravelly, “this is a citizens revolution.” 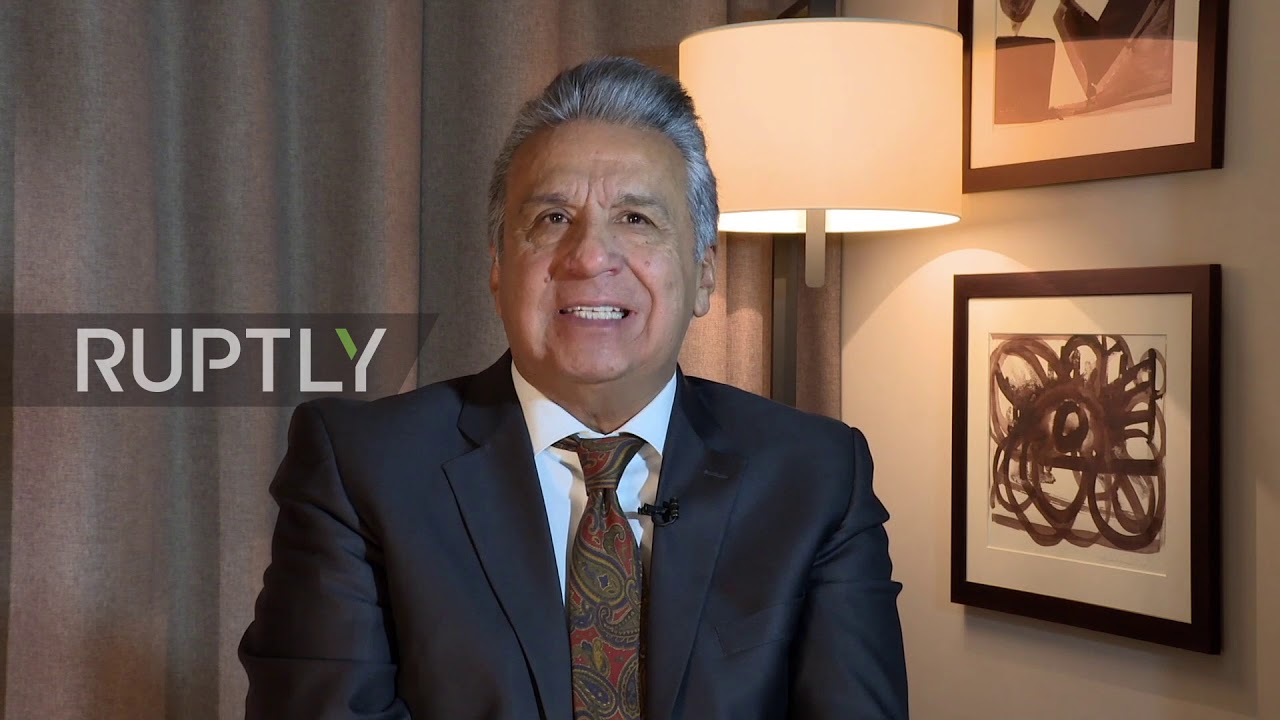 What else can we expect from this filthy traitor and naked tool of Washington’s hemispheric subjugation?
Other traitors include Argentina, Brazil, Guatemala, and Chile.

Peter Koenig is an economist and geopolitical analyst. He is also a former World Bank staff and worked extensively around the world in the fields of environment and water resources. He lectures at universities in the US, Europe and South America. He writes regularly for Global Research, ICH, RT, Sputnik, PressTV, The 4th Media (China), TeleSUR, The Vineyard of The Saker Blog, and other internet sites. He is the author of Implosion – An Economic Thriller about War, Environmental Destruction and Corporate Greed – fiction based on facts and on 30 years of World Bank experience around the globe. He is also a co-author of The World Order and Revolution! – Essays from the Resistance.

Syria, Then and Now: Liberated of Western-backed Terrorism