Home ABOMINATIONS PRESSTITUTES AT WORK: These Media Claims About Venezuela Are Lies Or Misconceptions

PRESSTITUTES AT WORK: These Media Claims About Venezuela Are Lies Or Misconceptions 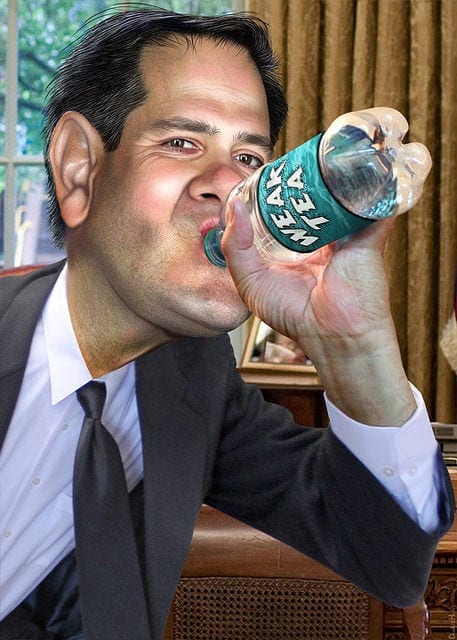 The squalid Gusano Marco Rubio: count on this guy to always promote the oligarchy at the expense of the poor.

[dropcap]T[/dropcap]he U.S. mainstream media is suddenly discovering Venezuela. Without having any actual knowledge of the country, all dirt the writers can think of is thrown against its government. Don't expect to get any facts from them. Most is just propaganda in a media build for a war.

In this NPR report for example, Amid Chaos Venezuelans Struggle To Find The Truth, Online, the first line is already an outrageous lie:

In Venezuela, where media is controlled by the government, figuring out what is truth, rumor or propaganda has always been difficult. 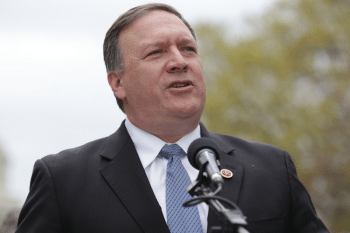 Neocon Pompeo: born to lie, and no regrets.

Secretary of State Pompeo and others claim that Cuba is involved in Venezuela. The NYT even headlines: With Spies and Other Operatives, a Nation Looms Over Venezuela’s Crisis: Cuba. But all the experts quoted refute Pompeo's claim:

“This claim that Cuba is controlling Venezuela has been around, really, since Chávez started,” said David Smilde, a sociology professor and expert on Venezuela at Tulane University. “It’s been long overblown.”
...
While former military officials who have fled Venezuela have reported the involvement of Cubans within the security and intelligence forces, experts say the extent of that involvement remains shrouded in mystery.
...
“There’s been a lot of speculation about this, and rumors about numbers and about how close they are to Maduro,” said Ted Piccone, a senior fellow in foreign policy at the Brookings Institution. “But I haven’t seen any hard, solid reporting on it.”
...
[T]he ranks of Cuban professionals working in the South American country have thinned in recent years, analysts say, and the relationship between Mr. Maduro and the current Cuban leadership is not nearly as warm as the friendship between their predecessors.
...
Political advisers still have the ear of key officials in the Maduro administration, though Mr. Smilde said: “Cubans often complain that Maduro doesn’t listen to them.”

Cuba has good economic relations with Venezuela. Several thousand Cuban doctors work there. But that's about it.

[dropcap]O[/dropcap]ne claim, repeated yesterday by the British ambassador at the UN, is that Maduro won the presidential election by "stuffing the ballot boxes". Venezuela doesn't have ballot boxes. It uses an electronic system developed by a British company that is highly praised:

In September 2012 former US President Jimmy Carter said “the election process in Venezuela is the best in the world”.

The voters identify with a voter ID and a finger print and vote on a touch screen. Maduro was duly elected as president. Twice. Some, not all opposition parties and candidates, boycotted the last election which led to a lower than usual turnout. Not taking part is a right the opposition can use. It is not the fault of the government.

[dropcap]S[/dropcap]ome media claim that the "international community" accepted the U.S. sponsored dude's presidential claim. That is a lie. The U.S. tried to find allies for its onslaught on Venezuela but failed to get international support except from a few of its poodles. Yesterday the UN security council did not take up a resolution against Venezuela because it was obvious that it would fail. Even at the Organisation of American States (OAS) U.S. attempts to push for a resolution against Maduro failed to gain a simple majority:

Thursday also saw a diplomatic battle at the Organization of American States, with Secretary Pompeo and OAS Secretary Almagro pushing the body to recognize Guaidó. The efforts were unsuccessful, garnering only 16 favourable votes out of the 34 countries, with US allies Guyana, Santa Lucia, and Jamaica abstaining.

[dropcap]A[/dropcap]nother frequently seen claim is that economic mismanagement caused the problems in Venezuela. But it was the drop in oil prices and, even more important, U.S. sanctions that led to billions of losses of government income and caused the economic difficulties. Sanctions do not work against governments as often claimed, but impoverish the people. Already back in 2014 Maduro identified them as part a regime change attempt. The Congressional Research Service lists all the sanctions and warns (pdf) that these hit the poor the most. Even the U.S. sponsored dude acknowledges that the U.S. sanctions are part of the 'regime change' plan:

Guaido also praised countries that had imposed sanctions against Venezuela, stressing that “sanctions worked” and played a part in getting the country where it is today.

The Bolivarian Republic of Venezuela is not even as messy as its neighbors are. Despite the current problems the UN's Human Developing Index ranks Venezuela higher than most of them. 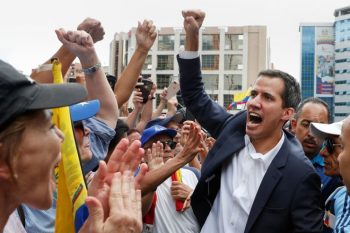 Guaido: Our man in Caracas, a shit stirrer on behalf of the empire.

All 'western' media repeat the claim that the U.S. sponsored dude claimed the presidency based on article 233 of the constitution. But none of them refute that obviously false claim. Article 233 of the constitution (pdf) of Venezuela details the procedures for the case that the president "becomes permanently unavailable" [or incapacitated] which Nicolas Maduro obviously is not. Moreover the next in place if the president becomes unavailable is the vice president, not the leader of the National Assembly. The dude has no legal basis to claim the presidency.

Another claim is that the U.S. sponsored dude is somewhat prominent. He is not:

Félix Seijas, a political analyst and director of the Delphos polling agency, said surveys showed that few Venezuelans even knew Guaidó’s name a few weeks ago.

The dude is simply a stand-in for Leopoldo López, a criminal opposition politician who already twice attempted violent coups:

Born into a well-off family with links to the business and oil sector, López, now 46, was educated in the United States and has a master's degree from Harvard University.
...
In a 2009 classified cable published by Wikileaks, the political counsellor of the US embassy in Caracas, Robin D Meyer, wrote that López had become a "divisive figure within the opposition"."He is often described as arrogant, vindictive, and power-hungry - but party officials also concede his enduring popularity, charisma, and talent as an organiser," the US diplomat wrote.

In the U.S. the real man behind the coup attempt is anti-Cuban Senator Marco Rubio:

[Rubio] waited less than a month after Mr. Trump took office to begin a persistent effort to draw the president’s attention to Venezuela. In February 2017, Mr. Rubio along with Mr. Pence helped usher Lilian Tintori, a Venezuelan political activist and television star, into the Oval Office to meet Mr. Trump. She told the president about her husband, Leopoldo López, an opposition leader under house arrest.

Rubio and other neoconservatives have since plotted to convince Trump to confront the people of Venezuela. Former CIA official Ray McGovern thinks, like me, that Trump seems to fall into a catastrophic trap:

Ray McGovern @raymcgovern - 16:47 utc - 25 Jan 2019 Venezuela could be Trump’s Bay of Pigs, with Bolton playing CIA's Allen Dulles and Pompeo John Foster Dulles. They and the US military brass tried to mousetrap JFK with deceitful assurances that there would be no need for US military action. Will Trump face them down, as JFK did?

The above are only some of the false claims and misconceptions about Venezuela that are floating around. Please use the comments to collect and refute whatever other lies you see.

The likes of NPR and the NYT really talk only about themselves and their controlling corporate state, but project it onto whoever is the enemy du jour.

(Not that they're directly controlled by some master cabal. One of the refinements neoliberalism made over classical fascism was to realize they don't need a de jure Goebbels ministry. The corporate media willingly, happily subordinates itself to the elites' program and only needs basic guidance from above. It figures out day-to-day lies on its own, along with regurgitating state propaganda as "reportage".)

About the Author
"b" (or Bernhard) is a German journalist who founded and edits Moon of Alabama.