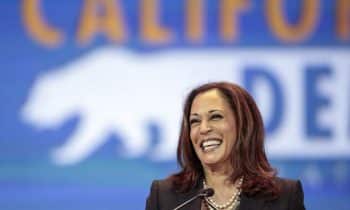 [dropcap]I[/dropcap]n the veritable miasma of disinformation that envelops the mainstream consciousness in America, dominated, naturally, by those who own the media and the political machinery, we are hearing already cries of alarm from those annointed by the treacherous Democrat party as its standard-bearers for 2020. Basically, Democrats, who know they are skating on thin programmatic ice, offering nothing but fraudulent promises to their captive audiences, worry that a third-party bid from former Starbucks CEO Howard Schultz (or anyone else, for that matter) could cost them the election. This arrogant and largely unchallenged notion, that the Democrats deserve a monopoly of political play under the banners of "reform" or "progressivism", lest someone automatically defined as "less worthy" should enter the race and spoil their victory "for the people" is a gargantuan hoax, and these charlatans, who have convinced far too many of their clueless followers of the moral rightness of their mission, need to be called on it. In years past, the acidly accused "spoilers" have included Ralph Nader and Jill Stein, and, naturally, Bernie Sanders, although this man, like a chameleon, wore various hats during the latest campaign, never quite abandoning the Democrat corral for which it shilled.  It takes some truly extraordinary gall for a party whose real stock in trade has been for far too many elections now nothing but NOT being the other odious party, duly bearing the label "the Lesser Evil", to squawk in protest at any legitimate competition.
Same wine, new bottles—
A new crop of charlatans to the front

In the wake of Hillary's upset defeat in 2016 we said that, having no real desire to do some serious introspection or change course toward a genuine progressive program, something in any case impossible for a party helmed by Wall Street shills committed to the empire's hegemonist project, the Democrats would opt for what they have done all along—double down on their propaganda, thinking (not without reason in a nation so psychologically vulnerable as America) that tinkering with the message was all that was needed to return the party to political solvency.In pursuit of this idiotic and utterly dishonest vision, we also said the incurably obtuse and out of-touch DNC big wigs would inspect their ranks for candidates who, according to their identitarian calculus, and, in some cases, "populist" noises,  could finally motivate the base. In parties of what is now politely called "liberal democracies", most professional politicians are creatures without principles or even conscious and coherent ideology, except opportunism and self-advancement, and this is particularly so in the United States where no ideology, except loyalty to US exceptionalism and capitalism, is ever spoused or tolerated. In such formations, relative acceptance by the kingmakers at the top, who negotiate further ascent for the favored ones into the privileged inner precincts of the nation's owners, rest on their potential or demonstrated ability to promote and preserve the plutocratic system intact, or in expansive good health.So far, the Democrats are clearly seeding the field with candidates to cover most possible bets. Four principal strains can be discerned:

All of them—except Tulsi Gabbard, who has made some credible dissenting noises—are quick to subscribe to the imperialist project of the United States, in the name of the usual blood-soaked tegument of national security and exceptionalist lies.

The identitarian group already has two prominent runners: Kamala Harris and Corey Booker. Both are black and uber ambitious, and both, by cold party calculation, were and are expected to capitalise on the "Obama brand". Kamala Harris, besides being black, telegenic and articulate, has the added advantage of being a woman, a fact that remains a strong plus among comfortable bourgeois feminists, for whom symbolism, with or without substance, is an irresistible lure.

The faux populist field is naturally occupied by Elizabeth Warren, and there's mounting noise in the Bernie Sanders camp, which means they would either cancel each other, message wise, or reinforce the campaign trend around such issues. In this sub-race, Warren may have an edge, again being a woman, and not being tainted by Sanders's last-minute betrayal in 2016.

In the strictly "minority" vote field, Kamala again looks strong, but here there are some emerging Latino faces, like Virginia senator and ex-army major Richard Ojeda, and there's of course, Corey Booker, a man whose ambition and opportunism easily outdistance even his senior doppelgänger model, Barack Obama, the man who almost created the franchise. All of these people act as "hooks" for the minority vote, and you can expect the Democrats will deploy them as expertly as possible since they sense the GOP, almost by design, presents a huge flank in this area.

OK, time to wind up this tedious summation. The last category is the senior statesman, and that goes, at this point, practically by default, to Joe Biden, an old Democrat warhorse who also manages to enjoy a far more avuncular and progressive image than he deserves, especially since he is a committed imperialist with a long warmongering rap sheet to his discredit. Not that any of that will see the light of day during the campaign, when it can possibly matter, as long as the mainstream media mavens have their say.

[dropcap]S[/dropcap]o the above is the backdrop for my displeasure, put mildly, at receiving a mail solicitation from the Kamala Harris electoral machine, telling me that she's worried, really worried, because a worthless and vain plutocratic creature, the clueless Howard Schultz, former Starbucks CEO, and a billionaire many times over with presidential ambitions, might actually spoil the run, delivering the prize to one Dinald Trump—again.

As a person who never registered with any American political party—except one time, The People's Party in 1980—and one who does not like, no, make that, despises, the Democrat party and all it represents, the sheer gall of mailing me an appeal (cum solicitation for $$$, a further insult suggesting they need the little people to stuff their plutocrat fueled coffers, another lie ) shows how this woman's campaign is simply a semiblind marketing robot, pushing all the buttons recommended by her marketing team, with no real understanding of what makes many Americans tick these days.  Not that such a thing ever matters to these people, as they have been taking the American population for granted for so long it has become an embedded habit in them.

In case you don't know why receiving ANY solicitation from the Democrats is particularly irritating, and any appeal from Kamala Harris doubly so, you only have to understand who she is. Lacking the eloquence of Teodrose Fikre,  one of the most lucid denouncers of this fraud in skirts, I will simply quote here a few things he says that will make you realise why such campaigns mounted by this ethically bankrupt party are insults to our intelligence:

The inspiration behind this article is the incessant chatter over the past couple of days of the new hero and savior of the liberal left that is being pushed by the Corporate State Media. The old me, the political lemming I once was, would have taken the bait and signed up to the narrative of Kamala Harris being the champion of us little people. Sam Rayburn would often say “there is no education in the second kick of the mule”; as in getting kicked once is a learning experience, but going back to get kicked again makes one an idiot. Well my fellow Americans, Obama’s roundhouse wallop was all the education I needed. I finally woke up to the fraudulence of this two-party extortion after getting a kick not even Bruce Lee could fathom.

The kick led to this political education: the status quo does not endorse true change agents ...and neither do plutocrats promote people that care about us. Bush, Obama, Trump, Harris, Hannity, Van Jones, the litany of duplicitous imps who are propagated by the establishment as working class champions are too many to list. But these people did not get afforded the stage and get accorded platforms without a reason. Money is the devil’s lasso unleashed to buy the souls of all these partisan hacks. They all accept fame and cash with this implicit understanding—shatter the people into islands of grievance in order to perpetuate friction.

Kamala Harris is the next iteration of the divide and conquer hoodwink. Money is now flowing to her coffers from the Democratic establishment and the affluent “liberal” bundlers and donors. The irony is that these donors are not partisan at all, they spread their money around to both parties in order own politicians on both sides of the isle. This is what most of us fail to realize, the uber wealthy do not give a shit about politics. People like the Koch brothers, Soros, Gates, Bezos, Buffet and the moneyed gentry only care about policies even though they make a great show of being concerned about fairness. As they leverage their amassed fortunes to purchase glowing press and burnish their benevolence, behind the scenes they unleash their bank accounts to buy and own every pundit and politician in their line of sight. (Teodrose Frike, Kamala Harris 2020: Chains You Can Believe In, The Greanville Post)

In other words, our dear Kamala, handsome and articulate female as she may be, is also a typical colossal fraud. A duplicitous imp. An imperial artifact—nicely packaged with pink ribbons, if you like, but a dangerous fraud nonetheless. Hence, should we really care if her candidacy blows up in her face due to some rude non-anticipated challengers? Are we going to share her "shock" and that of her campaign manager at being unceremoniously crowded into the tightening track reserved for the 2020 hopefuls by a guy who thinks his billions are proof of competence enough? I most certainly think not! In any case, since I like to play fair, here's the alert they sent me. You decide if you want to join this latest fools' crusade. 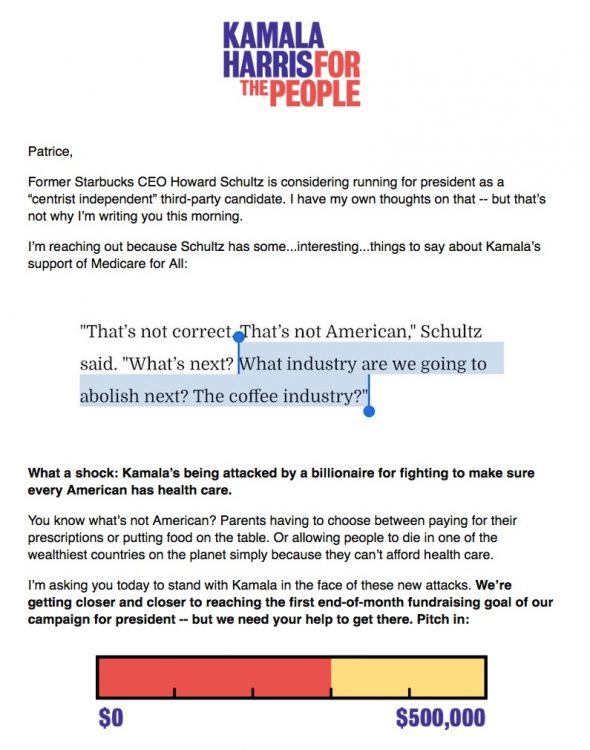 ABOUT THE AUTHOR
Patrice Greanville, is this publication's founding editor.

Many Countries at UN Oppose Trump Interference in Venezuela

Ms Harris is a fine capitalistic under the guise of a socialistic sort of, I mean with a kinda populistic agenda, politician. She, like well-nigh all of her competitors and colleagues knows which side of their daily slice of bread the oil is buttered on. Politics in the US is a well-paying and rough business, and don’t you forget it. It is not so much the contents but how their ambition is packaged and that often is pure lies and deceit. But never mind as long as it sounds good, they will succeed. The US is so permeated with the… Read more »