Run-in With A Professional Warmonger 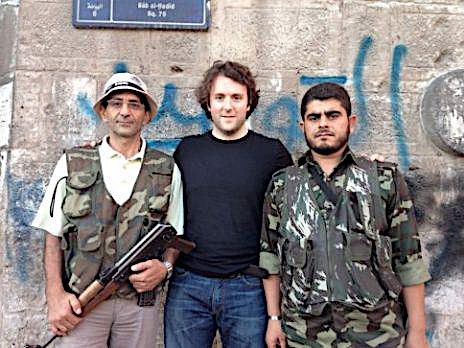 Aleppo, 2012. Michael Weiss with those lovable Syrian Jihadists. He's the one in the middle.

[dropcap]M[/dropcap]ichael Weiss is a name you may have luckily avoided. I had until recently, not interested in the propaganda from The Daily Beast, a deceptive corporate deep-state clearinghouse. From the start of the Syrian proxy war, Weiss has banged the drum for more weapons to the “rebels” there. He even traveled to rebel-held Aleppo to be photographed with Jihadists and to sell their image to his gullible American readers. That's strike one for Weiss.

“It might have seemed strange for Weiss, a right-leaning political operative who had worked with hardcore Islamophobes like Pam Geller and Douglas Murray, to suddenly be seen in the middle of a war zone palling around with Islamist guerillas. But the war in Syria had created strange bedfellows.”

That's an understatement. While writing this piece, Gadi Eisenkot, the head of the Israeli Defense Force, admitted to arming a dozen different Syrian rebel groups and even paying them salaries of $75 per man per month to attack the government forces there. We also know that a little-known state department memo unearthed in Hillary Clinton's emails detailed how destroying Syria was in Israel's interest.

Michael Weiss has a track record of writing articles like: "Why Arming the Rebels Isn't Enough - We need to dismantle Assad's air capability to really give the opposition a leg up" (June 2013). That is straight-up war propaganda urging America to commit war crimes against a sovereign nation, which never attacked us. This is a Crime Against the Peace and a blatant breach of the UN Charter. It's also what the Nazis were hung for at the Nuremberg Tribunals.

Just how much promoting terrorists should a "journalist" be given a free pass for, before he is considered problematic? 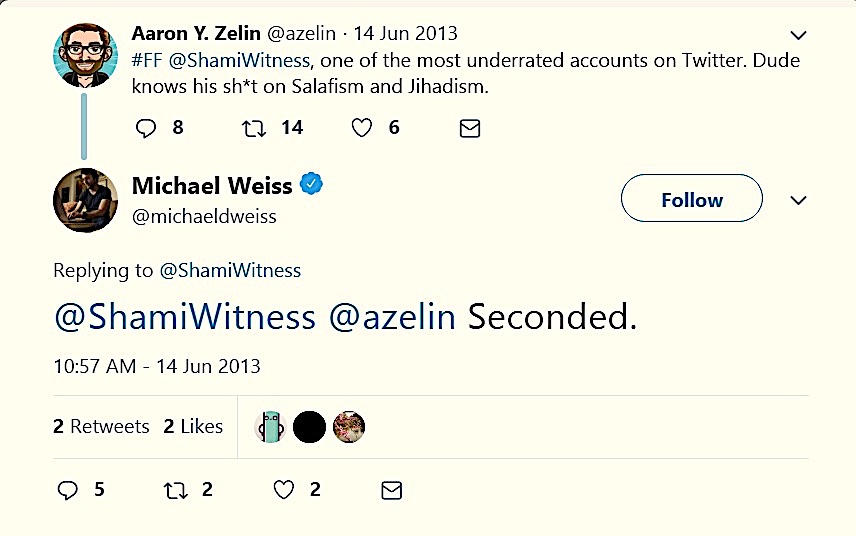 Michael Weiss then became quite cozy promoting a Twitter account named "Shami Witness." This Tweeter became notorious as ISIS' most successful recruiter for the Syrian Jihad, which has killed half a million people.

"His tweets, written under the name Shami Witness, were seen two million times each month, making him perhaps the most influential Islamic State Twitter account, with over 17,700 followers." 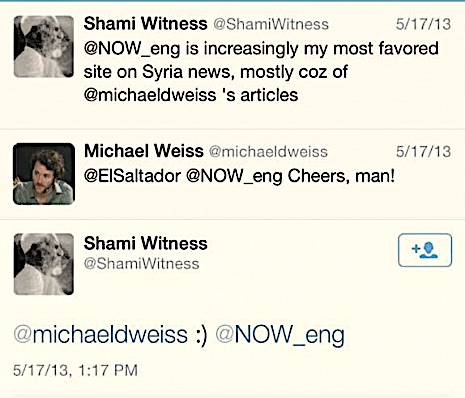 I happened upon Weiss on Twitter recently, when he spun an article about Russia's air campaign in Syria. His Twitter banner, a Freudian slip?

Weiss continues to try and make the lost case that there are good rebels, and that the only problem is “ISIS.” The article he Retweeted, conveniently hosted at the Moscow Times, says: “Only 14% of Russian Airstrikes in Syria Hit Islamic State Targets.” 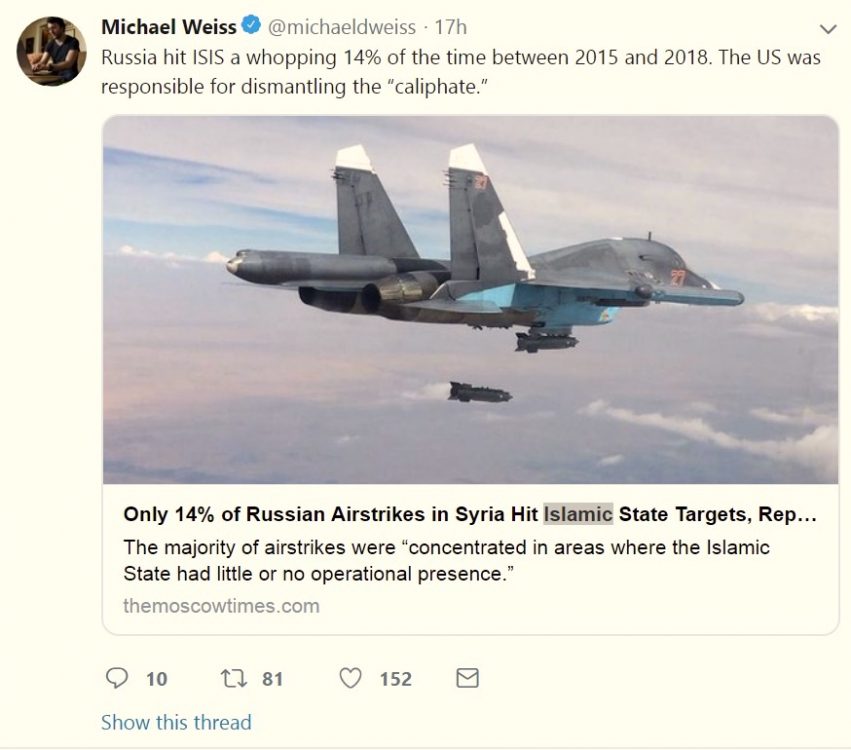 So, Weiss wants to both claim credit and paint Russia as the villain in one fell swoop. Just a typical Tweet at the office for him. He doesn't want to address where the other 86% of Russia's bombs struck, and that would be on the heads of his good friends in Al Nusrah Front and Tahrir al Sham, the main fighting forces that are even listed as terrorist groups by the US State Department.

The dishonesty of this propaganda is that Weiss fails to inform readers that there is an agreement between Russia and the US to keep the airspace divided along the Euphrates River. Russian planes are not supposed to cross east. That happens to be where ISIS has largely hidden from Russian air power. The US is supposed to control that piece of sky by a 2015 agreement, and the US military makes quite a lot of noise when Russian jets cross into that section of sovereign Syria, a section the US has no legitimate right to control in the first place.

As Michael Weiss is promoting his book on the Syrian war, he makes much ado about the falling-out between ISIS and other rebel groups, as if that was the important point of debate. Why that matters to the people of America, I do not know. 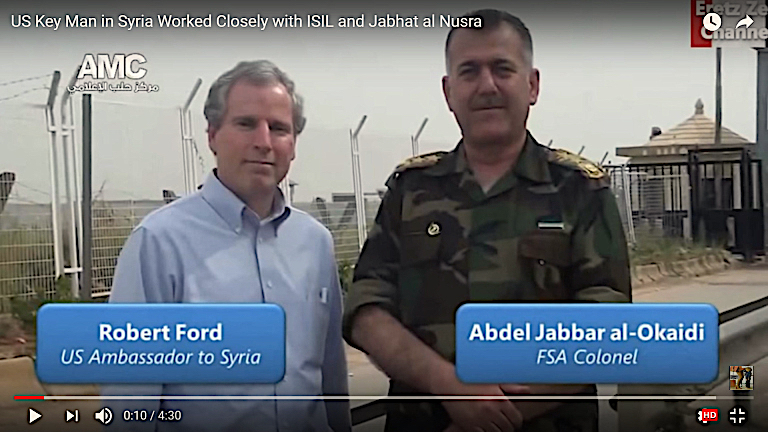 The Free Syrian Army's own commander, Colonel Abdel Jabbar al-Okaidi, admitted years ago that the “Free Syrian Army” and a number of terror groups worked closely together. They share a common enemy, that being the legitimate, democratically elected Syrian government. The government of Syria protects minority groups, while the head-chopping Jihadists are known to execute large numbers of captured people who are not Sunni Muslims.

Michael Weiss seems to have cleaned up our heated Twitter exchange by deleting the dead ends he had no valid responses to. A relevant Tweet was where I asked Michael which team he played for, since he opposes “ISIS,” but does he oppose TERRORISM in Syria directed at government controlled areas? That question was met with expected silence. So, opposing terrorism seems not to be a priority for Michael Weiss, but only “ISIS.” He's a bait-and-switcher. Look at the mean Islamic State, but ignore the other giant armies of Islamists behind the curtain.

Then the dog whistle came out. 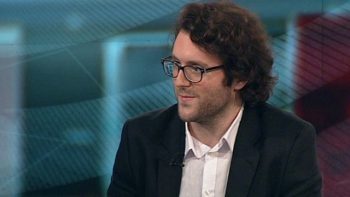 Weiss is a perfect mirror of the Deep State disinformation site The Daily Beast. Any lie or dirty trick is good enough to advance the neocon agenda.

[dropcap]W[/dropcap]eiss did 8 seconds of digging and came up with a Tweet of mine that 9/11 is not actually what we were sold. He even pretended to want to know more information, but it was purely an act. He was calling his followers to attack me over the sensitive September 11th issue, and to harass me sufficiently to distract me from talking about his support of Syrian terrorists.

Several of the apparently deleted Tweets (I can no longer find them) concern a very simple fact that changes the meaning of the 9/11 attacks. Those Tweets went like so:

Are you even aware that the CIA knew an Al Qaeda cell arrived inside the USA 16 months before the attacks, but they made zero effort to simply have them arrested?

Silence followed, and that's just a tiny tap from the truth hammer I was prepared to bring down on Michael Weiss. He's not an honest debater and isn't interested in the answers to the questions he posts. His tactic was to ignore facts and rally his followers to hurl feces my way. You're not allowed to question 9/11 in Weiss' circles, obviously.

How we know the Bush administration (and potentially others) is likely guilty of Treason for allowing the 9/11 attacks to succeed:

1. Informed May 1, 2001 of an Al Qaeda cell inside the country plotting a large scale act, yet did absolutely nothing to stop them.

2. CIA aware of San Diego Al Qaeda cell early in 2000, but hid the information from the FBI. And if you think you can attack the messenger, CounterTerrorism “Czar” Richard Clarke, the same information is published in the 2005 CIA Inspector General Report into 9/11 (p. xiv).

3. Bush was personally warned of Al Qaeda suicide skyjacking plot at the G8 in Genoa Italy, July 2001, and personally moved to a ship.

4. Bush spent the entire month of August 2001 clearing brush in the hot sun of his Texas ranch instead of the air-conditioned oval office he had fought so hard to steal.

5. They covered up the crime! The 28 pages of the Congressional Joint Inquiry into the September 11th Attacks were censored for 14 years, thereby giving “aid and comfort” to those Saudis named within the report who aided and abetted the purported hijackers, particularly Saudi Ambassador Bandar bin Sultan. This cover-up in-and-of-itself is the definition of Treason.

George W. Bush was a puppet, and a frightened one at that. His national security team was stacked with Project for a New American Century neocons, the folks who wrote lovingly about a “new Pearl Harbor” to more quickly give them what they wanted: multiple wars and increases in military spending into the foreseeable future. Notably, that's exactly what they got.

PNAC members included both Vice President Dick Cheney and the Defense Secretary who did nothing at all to defend the nation on the morning of 9/11, 2001, Donald Rumsfeld. This is the ugliest chapter in modern US history, and mostly because it's verboten to talk about it in the media, largely because of mocking war propagandists like Michael Weiss.

ABOUT THE AUTHOR
Joe Giambrone publishes Political Film Blog to store hyperlinks to all these wonderful factual sources.