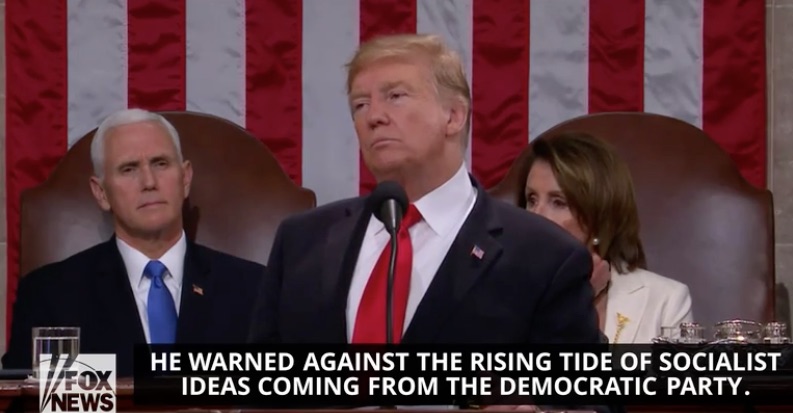 [dropcap]A[/dropcap]midst the cynical and hypocritical charade of Trump’s State of the Union address last night—the hosannas, standing ovations and chants of “USA!, USA!” from the assembled senators and representatives—the president made a remarkable statement that says a great deal about the state of American politics and the real concerns of the ruling elite.

For the first time in American history, a president of the United States, in a nationwide television address, denounced the growing popular support for socialism. “We are alarmed by new calls to adopt socialism in our country,” Trump declared. He pledged, “Tonight, we renew our resolve that America will never be a socialist country.” His audience, Democrats and Republicans alike, registered their approval with applause.

Behind all the bombast and the inevitable declaration that “the state of the union is strong,” Trump’s remarks had the character of a speech from the bunker. The ruling class fears not only the mounting challenges to its global position, but, even more significantly, the signs of growing social discontent and the renewal of strike activity.

The source of this fear is not feckless Democratic Party politicians like Bernie Sanders and Alexandria Ocasio-Cortez—who used an interview following the State of the Union to disassociate herself from socialism—but what the ruling class sees unfolding in the cities throughout the country.

This is not only an American phenomenon. The past year has been characterized by a growth of the class struggle internationally.

The latest edition of the French newspaper, Le Monde diplomatique, under the headline, “France’s class wars,” warns: “France’s elites have not felt such fear in half a century, and it’s not the usual fear of losing an election, failing to ‘reform’ or seeing their shares slide on the stock market, but fear of insurrection, revolt, and loss of power. The [yellow vest] street protests on 1 December 2018 caused some to feel a sudden chill.”

The newspaper cites comments from a pro-business journalist who said that big industrial group chiefs “were really scared for the first time that their heads would end up on stakes.” A polling organization representative reported that “top bosses were ‘actually very worried’ and said that the atmosphere reminded him of similar events in 1936 and 1968.”

What is true of France is true of the United States. Trump’s declaration gives a glimpse of the profound crisis of American capitalism and the real driving force of the political upheavals in Washington. It is the only thing that history will remember of his speech, which otherwise, consisted of the usual empty display of official pomp and ceremony, an endless and tedious barrage of lies and platitudes from the speaker, along with crass exploitation of victims of tragedies like the Pittsburgh synagogue massacre. 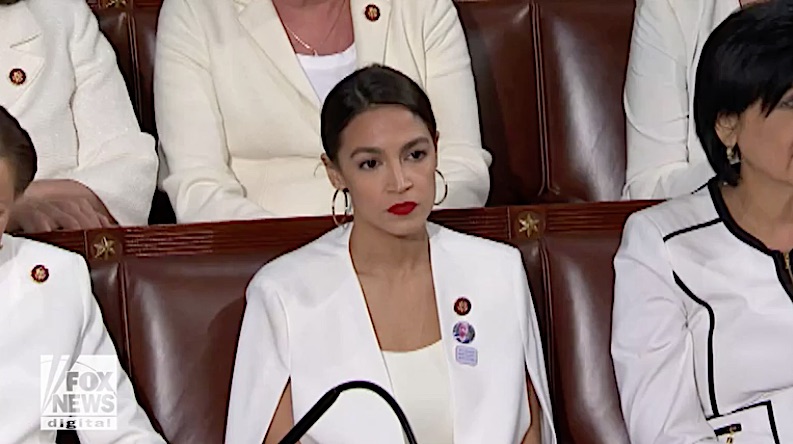 Ocasio sitting with other "ladies in white", looking unimpressed with Trump's performance. She may have been geuinely distressed by Trump's rhetoric, but there's also some coaching here: everything the public sees is in some way "managed". AOC is clearly a Democrat party resource to deflect the left instinct in many people.

In the State of the Union speeches under previous administrations, the anti-socialist nightmares of the ruling elite were focused on the Soviet Union, China or another foreign country. Under Trump, these fears were directed against an internal enemy, radicalized American workers and youth.

For its part, the Democratic response, delivered by former Georgia gubernatorial candidate Stacey Abrams, was even more embarrassing and pathetic than usual. Abrams combined a pledge to work with Trump to ensure his “success” with the Democrats’ endless manipulation of identity politics, speaking at great length not about the crisis confronting broad masses of people, but about herself.

As Trump’s blunt declaration suggests, the capitalist ruling class is not responding passively to the growing challenge from below. It is building up the police and military forces, as well as seeking to mobilize fascistic elements like those attracted to Trump’s nationalism and anti-immigrant racism.

Trump’s demand for a wall on the US-Mexico border has become a symbol of his efforts to develop an openly fascistic movement in the United States, which will mobilize the police, the military and gangs of thugs against the working class. In the week leading up to the State of the Union, Trump repeatedly hinted that if Congress refuses to fund the border wall by the deadline of February 15, he will declare a national emergency and order the Pentagon to build the wall without legislative authorization.

The Democratic Party adheres to a more traditional approach to the suppression of the class struggle, relying on the old union organizations to assist the forces of state repression. Democratic representatives demonstrated this during the State of the Union, rising to applaud every mention of the US military and police. While the Republicans chanted “USA! USA!” in response to Trump’s initial references to the economic “miracle,” the Democrats replied with the same nationalistic chant when Trump made reference to the record number of women now seated in Congress.

The representatives of both parties applauded Trump’s pledge to accelerate trade warfare with China, his denunciations of the NAFTA trade deal, and his boasts about imposing a new government in Venezuela, where he has made repeated threats of military intervention.

No speech by Trump will reverse the deepening crisis of American and world capitalism, and the consequent shift in political sentiments among American working people. Significantly, a CNN poll released the day before the State of the Union found 70 percent believed that the Trump administration was performing badly, with 43 percent saying it was the “worst in their lifetimes.” Other polls consistently show growing support for socialism and hostility to capitalism.

Socialism is resurging because capitalism has failed. The class struggle, long suppressed, is beginning to burst into the open. The great task is to provide this objective class movement with a program, perspective and political leadership, to put an end to capitalism and the danger of economic catastrophe, dictatorship and war.

ABOUT THE AUTHOR
Patrick Martin is a senio editor with wsws.org, a Marxian publication.