But on the crucial issue of foreign policy she’s a dissenter. And, from what I can figure out, this dissention comes from a principled position.

And that makes her persona non grata in the current political climate of partisanship.

If there has been one thing that Donald Trump has been useful for it is exposing who the real enemies of peace in the world are. He is useless to stop them, but at least he has been such a lightning rod that he’s outed what truly animates Washington, London, Berlin, Brussels and Paris. We have him to thank for that.

Gabbard is the next generation of US politician but I fear she is too little, too late. Much like Rand Paul in the GOP. She understands, as a veteran of our foreign adventurism, that the game of geopolitics is built on fundamentally flawed premises. And that the best way to win that game is not to play.

And for this she has been the target of the worst kind of smear campaign, one that was internally generated by a US funded, DNC-enabled, opposition firm. No longer is it enough to bomb or gas people overseas in false flag operations to keep the electorate braying for war.

Now it’s come to the land of mundane political campaigns.

That’s how desperate the Democrats are to regain the White House in 2020. They will eat themselves before allowing any variation of message. No dissention is allowed. No Bernie Sanders to split the base and confuse the simpletons in Flyover Country they need to win back the Rust Belt.

It’s why we’ve seen them go after Bernie himself and why Bernie is now one-upping Elizabeth Warren’s patently stupid 70% top tax bracket. Whatever Fauxcahontas wants, I want 10% more, because I’m 10% more leftie than she is. 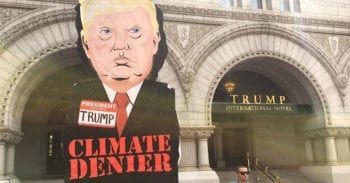 It’s all so predictably pathetic it would be laughable if Donald Trump wasn’t such a hopeless mess on everything else.

Gabbard, for all of her faults from this libertarian’s perspective, is still a welcome breath of very fresh air on the main reason I voted for Donald Trump in 2016 – to end the foreign wars that are bankrupting us financially, culturally and spiritually.

Because she understands what many reasonable and principled liberals understand: The Swamp is filled with the runoff from the overseas Empire.

We can argue about taxes and health care after we stop spending $1 trillion a year subjugating the world for the profit of the weapons producers, military contractors, oil companies, lobbyists, spies, oppo research firms, generals at NATO and all the bureaucrats that money subsidizes.

So the demonization of Tulsi Gabbard started before she even had a chance to officially enter the race. Because if there is one thing that unites the vultures in D.C. it is the threat of peace breaking out in the public discourse.

“The demonization of Tulsi Gabbard started before she even had a chance to officially enter the race. Because if there is one thing that unites the vultures in D.C. it is the threat of peace breaking out in the public discourse…”

Every day the case for staying overseas in places like Syria and Afghanistan frays a little bit more. Every election since 2008 in the US has been a referendum in some way on the Empire abroad. Obama in 2008 and again in 2012 as Romney and McCain positioned the Republicans to look like warmongers worse than Obama was.

And then Trump in 2016. It all started with Ron Paul and Gabbard is yet another in a long line of critics of that which is not to be criticized in D.C.

She has smartly positioned herself as the outsider on the one issue that unites the center of the US electorate – left and right – ending the Empire. Trump makes the point that it is too expensive. He’s a transactional kinda guy.

Gabbard is making the case on moral grounds, and good for her.

She defied her party to go to Syria and meet with President Bashar al-Assad to get a better look at what was happening there. She knows there are millions of votes to be mined from being anti-war. 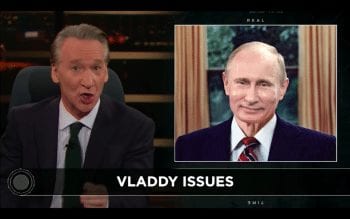 Court jesters like Bill Maher, with a huge liberal following have played a role in keeping the Russophobia hysteria going, and cemented such dangerous nonsense in the Democrat ranks.

But, the Democrats, so thoroughly suffused with the anti-Trump animus, have turned the mere suggestion of changing course in the Middle East as giving advantage to the evil Vladimir Putin. It’s beyond silly in the extreme and yet the constant barrage of anti-Russian propaganda has 72% of Americans viewing Russia unfavorably.

These are worse than Cold War numbers, folks. And yet, what are the Democrats so scared of?

What’s sad about the attack on Gabbard is not just that it was obviously made up and then breathlessly amped up by NBC news. It is that 17 out of 20 Democrats would likely never vote for her in the primaries because of this irrational hatred of Russia created by the Clintons as payback for Hillary losing an election she had no business winning.

It reeks of weakness, fear and desperation. It reeks of moral bankruptcy.

Gabbard will have a better shot at an independent run. But she won’t do that. She will continue to snipe from the sidelines, like Rand Paul, and wait for the country to come to her, if ever.

War is and should always be the bellwether by which a candidate for President is measured. And the Democrats are using Russiagate hysteria to keep the most expensive part of the empire off the table while they talk about how they are going to pay for universal health care by taxing assets and Unicorn farts.

Gabbard is smart throwing her hat in the ring now. I don’t think she has much of a chance of affecting the race in 2020 because the intensity with which Trump Derangement Syndrome burns within the party faithful.

But if she is capable of connecting with people by separating ending the Empire from giving Russia an advantage she could be useful in keeping things from getting any worse, while her party sinks into a frothing, gibbering mess, especially if somehow Trump wins re-election.

Tom Luongo is an independent political and economic analyst based in North Florida, USA.

The Night of Terror: Wyoming Game and Fish’s Latest Attempt to Close the Book on the Mark Uptain Tragedy