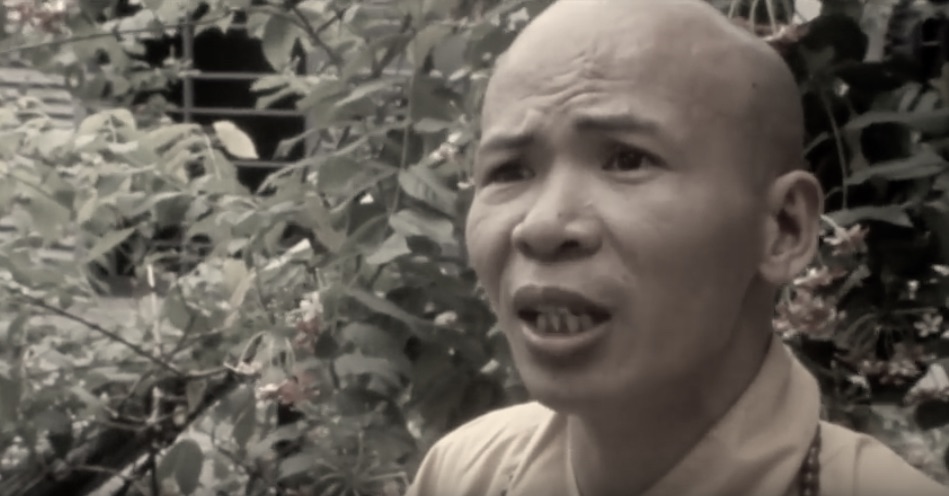 Still from Peter Davis documentary Hearts & Minds (1974), which gave a voice to the Vietnamese.

Peter Davis directed a brilliant documentary film on the Vietnam conflict (I refuse to use the term "War" as Congress has not declared war since WWII) entitled Hearts and Minds (1974).

This is a "must see" for anyone who wishes to experience the "yin and yang" of the pros and cons of our involvement there. Equally evident to any viewer is how adept those who control our current empire are in gaining support for their phony endeavors abroad.

Davis had so many interesting interviews with just about every type of American as to their views about Vietnam. He used actual film clips revealing our destruction of that once beautiful country... a country that many Americans today would fail to find on a world Atlas.

There are two interesting and highly enlightening interviews that I will focus on in this brief piece, plus footage of a former POW back in his hometown in New Jersey. 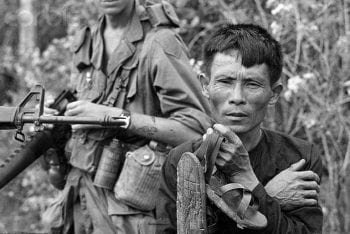 Let's begin with that one: Navy Lt. George Coker was filmed addressing an auditorium of elementary Catholic school kids. He made some interesting statements during his Q & A session with what looked like seven- and eight-year-olds: "If you ever have to go to war, and unfortunately someday you WILL have to go to fight a war ..." and when asked about what Vietnam looked like: "... Vietnam was very pretty if it wasn't for the people. The people over there are very backward and primitive and they make a mess of everything!" Great role modeling for young impressionable kids George, especially when you kept referring to the enemy as "gooks."

David Emerson, father of a Navy pilot killed in Vietnam, seemed like a wonderful and soft spoken guy. He reminded me of my Uncle Pasquale, who had that same sweetness about him. You know, not a bad bone in his body.

Interviewed at his home with his wife in 1973, Emerson had these beliefs:

"There is NO sacrifice in vain ... that is the price you pay for freedom ... and it is the kind of risk that you take to preserve the kinds of ideals that we have."

When asked about the course we had been taking in Vietnam, Emerson said:

One would surmise that David Emerson was "out to lunch" when Nixon did his Christmas carpet bombing in 1969, or when our pilots overwhelmed both the South and North Vietnamese people with incendiaries like Napalm... melting away the flesh like wax off of a candle!

Davis interviewed pilot Randy Floyd, who felt so ashamed of  the murder and terror he caused innocent civilians that he broke down continually during the interview. After he composed himself Floyd made this key observation:

"Americans have worked extremely hard NOT to see the criminality that their officials and their policymakers have exhibited."

How intuitive for not only 1974 Amerika, but for 2016 Amerika as well. Ever wonder how many fine and decent friends and neighbors of ours still hold this "My country right or wrong" attitude? This empire is so adept at stirring up deep seated patriotic passions in many of us... to the detriment of our moral compass!

Since 9/11 our leaders have been given a "free pass" by our embedded media and our citizenry. Phony wars and occupations with Good Kill drone missile attacks on innocent civilians using a hijacked flag and "Support our brave troops" mantra have mesmerized many of us. If anyone really did "support" our troops they would never have sent them overseas in the first place! Instead, we get every sporting event started with the honor guard, the giant flag across the field or arena and some "God bless Amerika" claptrap.

Ask Vietnam vets like Randy Floyd if God blessed Amerika during the Vietnam disgrace, and ask the same of Iraq Veterans for Peace if God blesses our jackboot in the Middle East now. Sadly, regardless of who won this last clown show/reality show election, the obscene military spending will continue as will our empire all over the globe. It is time for the real patriots to win back the Hearts and Minds of our own people and say "Enough is enough!"

The US war on China’s economic model

Caleb Maupin: Is America The New Rome? A Socialist View