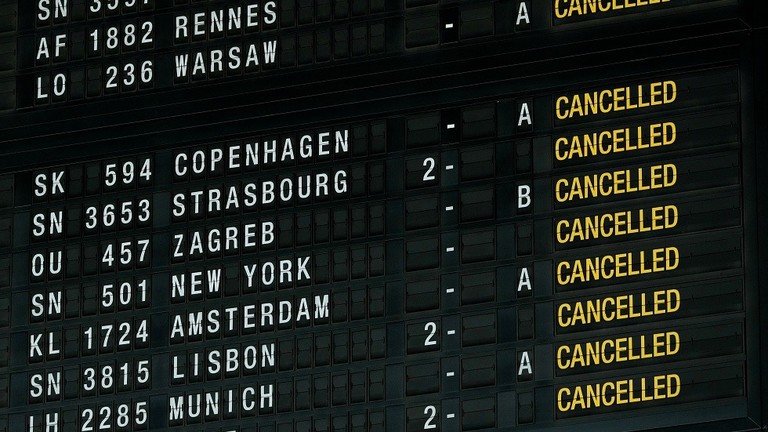 All flights in and out of Belgium are canceled due to a general strike on February 13, 2019.
A general strike over pay and working conditions has brought Belgium to a halt, leading to total chaos in airports, on the roads and in the skies.

Though Brussels Airlines provided advance warning of the general strike last week, thousands of travelers unable to change their plans have been stranded at airports across the nation that hosts the EU capital. Some 60,000 people’s travel plans have been affected, with only emergency and military flights allowed to depart or arrive nation-wide.

UPDATE - Unions at skeyes have called the air traffic controllers to join the general strike on 13 February. At this moment, the impact for #brusselsairport is still unclear. Please check our website for the latest updates & advice. >> https://t.co/4ewJFY9vYs pic.twitter.com/HX3mP4aN3l

I guess security @BrusselsAirport is already on strike? Or did you forget to adequately staff the security checkpoints again due to “unanticipated volume“? pic.twitter.com/krB7D7h92o

With air traffic controllers off-duty, even flights scheduled to pass through Belgian airspace have had to reroute and go bypass the country entirely.

Due to National strike in Belgium, airspace below FL245 is closed until 21.00 UTC https://t.co/wTVsPCGeni pic.twitter.com/Z6qUjyS2TW

The strike coincides with the visit of NATO defense ministers, who arrived in Brussels for a scheduled meeting. Even these NATO officials were not exempt from the chaos, and were forced to land in nearby countries and drive the rest of the way.

Some flights are forced to take a detour because of the restrictions in the Belgian airspace. pic.twitter.com/RlEQRUztgs

Getting around within Belgium has not been any easier. Wednesday’s strike includes Brussels public transport workers and the national rail authority, resulting in major train and bus delays.

Several factories were blockaded by striking workers, while numerous pickets and demonstrations clogged roadways. Two workers in Ghent were hospitalized when a driver angry with the traffic-blocking picket line smashed into it with his vehicle. The driver was immediately arrested.

Aside from transportation industry employees, the strike also included a large number of government workers. This means that schools and nurseries were also shut down for the day, and police have had to temporarily replace staff in Belgian prisons.

Those participating in the 24-hour work stoppage are members of Belgium’s three largest trade unions, who together boast nearly 4 million members out of the country’s total population of 11 million. Their combined efforts are expected to cause tens of millions of Euros in economic damage.

“What we want is to tell employers, whoever they are, that we’re sick of them putting all the dough that we create in their pockets. It’s time to give some of it back to the workers,” Robert Verteneuil, president of the Socialist General Federation of Belgian Labor, told public radio on the day of the strike.

Officials have responded to the strike by saying it won't solve anything and calling for dialogue, while insisting that their pay raise proposals were reasonable.

Ilhan Omar Smacks Down Elliott Abrams In Front Of Everybody