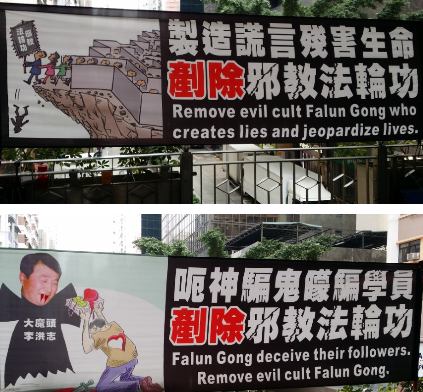 Pictured above: every weekend in Hong Kong, Falungong and Anti-Falungong supporters put up stands and hand out flyers. They will both usually be side by side and frequent heavy foot traffic zones outside bigger metro stations and pedestrian overpasses and walkways. The poster up top shows Falungong leading brainwashed masses over a cliff, with a banner that reads, “Falungong’s evil teaching”. The bottom one shows a convert handing over his heart, gold and legal papers to Li Hongzhi, the Falungong’s founder, while calling him, “The Devil”.

Live from the streets of China, Jeff

Note: I would like to thank Charles Liu, of https://blog.hiddenharmonies.org. Most of the material in this article/podcast came from his fine research and writing. Check out his blog. He’s a really good journalist.

This week, the CIA/MI6 publications, the Guardian and the Wall Street Journal, came out simultaneously with very similar articles, rehashing a tall tale that has been lurking around mainstream media for 12 years: the supposed organ harvesting in China (https://www.theguardian.com/science/2019/feb/06/call-for-retraction-of-400-scientific-papers-amid-fears-organs-came-from-chinese-prisoners and https://www.wsj.com/articles/the-nightmare-of-human-organ-harvesting-in-china-11549411056).

The culprits are still the same. For background, the well-known CIA front organization, Falungong, or Falun Gong (FLG) has a long, sordid history of working overtime to destabilize the Chinese people’s communist-socialist way of life. I wrote about this gang of saboteurs in The China Trilogy (http://chinarising.puntopress.com/2017/05/19/the-china-trilogy/ and https://chinarising.puntopress.com/2018/06/18/praise-for-the-china-trilogy-the-votes-are-in-it-r-o-c-k-s-what-are-you-waiting-for/). Another celebrated CIA front, the National Endowment for Democracy (NED) is also involved, through the evil offices of neocon Ambassador Mark Palmer, until he died in 2013. He’s the guy who co-wrote Ronald Reagan’s famous 1982, “Marxism is heading towards the ash heap of history” speech. Tell that to 1.4 billion Chinese. Not!

Every Western anti-communist, anti-socialist propaganda campaign needs a bought and paid for politician or two, to lend it “credibility”. In the case of the FLG, that would be US Congressman Tom Lantos’ wife Annette, who, with Mark Palmer, founded the “Friends of Falun Gong” front group. NED has given millions to this shell operation (http://falungongpolitics.blogspot.com/2008/03/money-trail-between-us-government-and.html?m=1).

As far back as 2006, the US government knew this organ harvesting slander was a Big Lie. In an internal report released by Wikileaks, the American Embassy even pulled off a surprise visit to the place the FLG claimed was killing thousands of its followers, Muslims and Ouighurs/Uyghurs, supposedly cutting out all their organs and then cremating the remains. FLG was screaming to the world that it was a Chinese Auschwitz, on an industrial scale. Yet, the Department of State report,

Found no evidence that the site is being used for any function other than as a normal public hospital. Amnesty International spokespersons have stated that the claims of systematic organ harvesting of Falun Gong practitioners cannot be confirmed or denied (https://wikileaks.org/wiki/CRS:_China_and_Falun_Gong,_August_11,_2006).

In other words, it was not true then and is still not today. But for the Big Lie Propaganda Machine (BLPM), truth goes out the window in the West’s pathological zealotry to discredit any country that is not a resource whore for Fortune 500/Wall Street capitalism, including China.

So, the Big Lie must be kept alive. Right before the US State Department confirmed it was a hoax, two reliable imperial whores, Canadians David Kilgour, a member of parliament and David Matas, a “human rights” attorney published a report that was probably given to them by CIA/FLG. It is cited in the same Wikileaks release above. In 2008, Charles Liu (https://blog.hiddenharmonies.org), who provided me with most of the researched information used in this article/podcast, wrote an open letter to these two colonial cuckolds, citing overwhelming evidence that this story was a hoax, and asking that they retract their bogus claims (https://blog.hiddenharmonies.org/2008/10/06/open-letter-to-david-kilgour-and-david-matas-on-falun-gong-and-organ-harvesting/). Of course, they didn’t. Are you kidding? It has nothing to do with the truth and everything to do with the BLPM hating communism, socialism and anti-imperialism. Just ask Venezuela, Cuba, North Korea, Iran, Iraq, Russia, Libya, Syria, Eritrea, along with China and many more proud peoples, who want their independence, unique ways of life and to not be occupied by NATO.

In fact, these two Canadian compradors for capitalism, along with another commie hater, Ethan Gutman, maintain a hoax website entitled, “The International Coalition to End Organ Pillaging in China” (https://hu.endorganpillaging.org/). These guys and their site reek of CIA money and are part of the BLPM.

Then, there are spinoff groups, like the FLG creating “Doctors against Organ Harvesting”. Charles Liu did his usual excellent job of research and showed that its director and every “doctor” on the panel were all Falungong members (http://falungongpolitics.blogspot.com/2007/02/another-example-of-falun-gongs-hidden.html?m=1).

Now, the Guardian and Wall Street Journal are digging up all this phony baloney from the BLPM, by referring to these aforementioned clowns, while citing the European Parliament’s (EUP) 2016 “written declaration 0048/2016 on stopping organ harvesting from prisoners of conscience in China”. As it turns out, only the original twelve members who submitted it were signatories. On July 27, 2016, it lapsed into undignified irrelevance after the three-month submission period, since it did get the obligatory 50% of members to sign, so it was never officially published (https://eur-lex.europa.eu/legal-content/EN/TXT/?uri=OJ:C:2017:304:FULL). In other words, it was a defunct, dead letter.

So, here we are in February 2019 and BLPM mouthpieces the Guardian and Wall Street Journal are making it look like this defunct EUP “human rights declaration” was a really big deal, when the EUP got so sick of the CIA/MI6/DGSE/BND bribing and extorting its members to pump out these propaganda pieces, that the whole system was abolished, while citing a bogus “report” from the aforementioned CIA “organ pillaging” front website. The BLPM is propaganda based on lies built on propaganda. It is a seductive, mainstream media three-card monte, an evil circle of color revolutions, subversion and subterfuge that just keeps on spinning death and destruction.

Looking at the calendar, it’s about time to dig up another classic mainstream hoax, to insult the Chinese people: selling canned human meat to Africans. That BLPM whopper got a big buzz around the world a couple of years ago (https://www.mirror.co.uk/news/world-news/china-shipping-human-flesh-cans-8217761). It’s a CIA special. I’m sure hoary, “police state” chestnuts from Tibet are in the pipeline too. Hong Kong, Taiwan, Macao, the South China Sea, Belt and Road Initiative, state-owned enterprises (SOEs), ZTE, Huawei, cyber-hacking, cashless society, surveillance cameras, AI, big data, facial recognition, Social Credit Score (SCS) – the hopper of hoaxes from Western hell is full, and just waiting for a little spin.

It’s sad, but like the bogus Muslim concentration camp Big Lie, it works every time (https://chinarising.puntopress.com/2018/08/27/time-to-get-real-about-chinas-25-million-muslims-china-rising-radio-sinoland-180827/). The problem is 99% of Westerners mistakenly believe they have a “free press”, barely read beyond the well-orchestrated, sensational headlines, swallow it all as gospel truth, post it on their Facebook and Twitter pages, then are “experts” at the dinner table and around the water cooler at work – Hey, look at me, I subscribe to the Economist and the New York Times! This, while they are equally brainwashed that socialist, communist, anti-imperial media are all “totalitarian” and unworthy of consideration. What the BLPM does is ingeniously and diabolically effective: psychological reflection/deflection of all its planetary psychopathy and tyranny onto its anti-imperial enemies. No wonder they call it psyops.

Unfortunately, humanity – mostly dark skinned, poor and Muslim – pays the terrible price of millions of innocents being exterminated every year and the planet being genocidally plundered and environmentally desecrated by global capitalism, as a result of Western citizens’ delusions of racial, cultural and political superiority (https://chinarising.puntopress.com/2018/01/06/slavs-and-the-yellow-peril-are-niggers-brutes-and-beasts-in-the-eyes-of-western-empire-china-rising-radio-sinoland/ and https://chinarising.puntopress.com/2017/11/10/all-the-chinese-people-want-is-respect-aretha-franklin-diplomacy-on-china-rising-radio-sinoland-171110/ and https://chinarising.puntopress.com/2018/03/01/western-racism-and-hypocrisy-foaming-at-the-mouth-over-chinas-constitutional-changes-china-rising-radio-sinoland-180301/).

Read it and weep.

What IS this thing called “American Exceptionalism”? Three views

Escalating the new Cold War with Russia via Ukraine: Biden’s...

NYTimes warns readers against critical thinking lest they realize the...

“Our society is sick:” The Lancet condemns American capitalism