US President Donald Trump unleashed a global tirade against socialism at a Florida university Monday, in which he targeted Venezuela as the front line in this fascistic crusade.

Delivered to a hand-picked audience of Republican operatives and right-wing Venezuelan and Cuban exiles chanting “USA, USA, USA” and “Trump, Trump, Trump,” both the speech—and the response to it—had a fascistic character. It resurrected the language not only of McCarthyism and the John Birch Society in the United States of the 1950s, but that of Mussolini and Hitler in the Europe of the 1930s.

Mimicking the fascist dictators, the president’s hysterical antisocialism was combined with imperialist warmongering. Trump delivered an ultimatum to the Venezuelan military to either capitulate to US regime-change or be slaughtered. He made it clear that Washington views the coup against the government of Nicolas Maduro as only the first step in a hemisphere-wide war to overthrow the governments of Nicaragua and Cuba and eradicate the growing influence of the United States' geopolitical rivals—China and Russia—in Latin America. 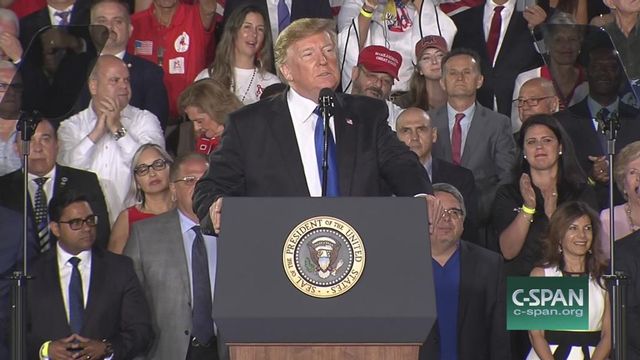 For Trump, the speech in Miami no doubt represented one of the first salvos in his 2020 election campaign, in which he intends to mobilize the most ultra-right elements in the United States. He intends to place the Democrats on the defensive, compelling them to deny any connection to “socialism” or “leftism.” He is likewise counting on their congenital cowardice: that none of them will come out to warn the American people that the man in the White House has—as aides have revealed—studied the speeches and writings of Adolf Hitler and is carrying out policies that lead to outright dictatorship and police-state repression.

Trump’s fusion of US imperialism’s ambition to enslave Latin America with rabid anticommunism must lead, if not stopped, to a hemispheric war and mass repression within the US.

Trump’s speech, replete with vows of a global crusade against “communism and socialism,” reflected growing fears within the US ruling oligarchy—not of the insipid politics of the likes of Bernie Sanders or Alexandria Ocasio-Cortez—but rather of a dangerous challenge from below to their power and wealth. This ruling layer is rattled by a steady growth of strikes, including those breaking out in opposition to the existing unions, as well a widespread radicalization of both workers and youth. Recent polls have increasingly expressed the preference of the younger generation for socialism over capitalism. This fear among America’s billionaires and multimillionaires provides a core constituency for the fascistic agenda being promulgated by Donald Trump.

The speech also comes only a few days after the declaration of a state of emergency, whose immediate purpose is to utilize the military to build a wall along the US-Mexico border. However, the implications are far broader. The declaration is a frontal assault on core constitutional norms and democratic rights, targeted at the growth of social opposition within the United States. Trump and his chief advisors are operating off a fascist playbook.

In his anticommunist tirade, Trump declared that “socialism by its very nature does not respect borders,” and is “always seeking to expand,” a complaint that reflects fears within the ruling class of the growing international movement of the working class. This includes the outbreak of strikes by Mexican workers in maquiladora plants that feed the US auto industry on the same US border that Trump wants to wall off.

Against this incipient expression of the international unity of the working class, Trump spouts the poison of nationalism and xenophobia, echoing the fascists of the 1930s.

“The twilight hour of socialism has arrived in our hemisphere,” Trump recited from a speech that was drafted by his fascistic aide Stephen Miller.

Socialism, he proclaimed, was “about one thing only, power for the ruling class.” It delivered, he said, only “corruption, exploitation and decay.” How this definition differed in the slightest from the government and the social order over which he himself presides, Trump failed to explain.

In relation to Venezuela, Trump declared in his speech that Washington seeks “a peaceful transfer of power, but all options are open.”

This direct threat of a US military intervention comes as the Pentagon has become increasingly involved in a transparent provocation on Venezuela’s border, using US Air Force C-17 cargo planes to fly cargoes that are described as “humanitarian aid” into the Colombian border city of Cúcuta. Washington has a well known record of employing similar “humanitarian” charades in Central America and elsewhere as a means of delivering arms to terrorist forces.

The aim of the stockpiling of USAID supplies on the border is to provoke a confrontation with the Venezuelan military that can then be used as the pretext for direct US military intervention.

Trump’s fusion of US imperialism’s ambition to enslave Latin America with rabid anticommunism must lead, if not stopped, to a hemispheric war and mass repression within the US.

Within this political context, special note should be taken of Trump’s increasingly violent threats against those whom he perceives as his personal enemies. His demand for “retribution” against Alec Baldwin, whose latest Saturday Night Live parody of Trump angered the president, was nothing less than an incitement for a physical assault on the actor. This political episode must be taken seriously. However, as is to be expected, the threat against Baldwin, as well as Trump’s tirade in Florida, was ignored in the Monday evening news broadcasts of the major television networks.

ABOUT THE AUTHOR
The author is a senior editorial member of wsws.org, a Marxian publication.