“We’re happy to see a resolution that condemns real bigotry, rather than going after Rep. Ilhan Omar and her vision of a world free of racism and oppression.”
by Jake Johnson

The House on Thursday overwhelmingly passed a non-binding Democratic resolution condemning anti-Semitism, white supremacy, Islamophobia, and other forms of bigotry.

The final tally was 407-23, with 234 Democrats and 173 Republicans voting yes. All of the no votes were Republicans, and one GOP member—Rep. Steve King (R-Iowa)—voted present.

Though the resolution does not mention Rep. Ilhan Omar (D-Minn.) by name, progressive critics perceived the measure as an implicit rebuke of the congresswoman over her criticism of the Israel lobby and government.

While advocacy groups that have mobilized in defense of Omar applauded House Democrats’ far-reaching condemnation of hatred and bigotry, they were quick to note that the resolution is far from perfect. 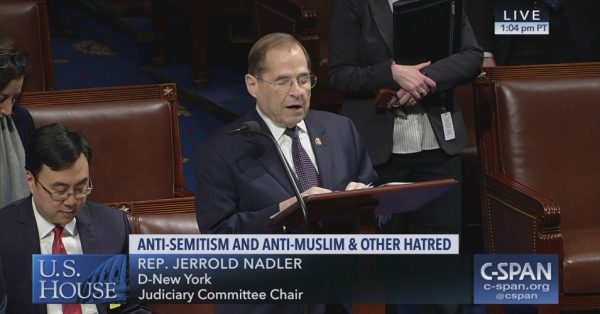 “As the anti-Omar resolution was transformed into a broader ‘anti-hate’ resolution—with plenty of rhetoric that progressives support—it unfortunately found no room to say: ‘Criticism of Israel cannot be equated with anti-Semitism.’ That was the message of Bernie Sanders and Elizabeth Warren in their defenses of Omar,” said Jeff Cohen, co-founder of RootsAction.org.

Let’s hope the resistance to the original resolution marks a turning point in Congress’ blind support for Israel’s subjugation of Palestinians.”

Linda Sarsour—executive director of MPower Change, a broad coalition of Arab and Muslim groups that helped organize support for Omar—said that it is now time to “get back to work against the rise of white nationalism that threatens all of our communities and build a government and policies that respects every resident of this nation.”

“We are a movement that unequivocally rejects anti-Semitism, Islamophobia, anti-Black racism, and all forms of bigotry, and expect the same from Democratic leadership,” Sarsour said. “It’s a new day where we no longer will accept attacks on our free speech and stifling of necessary debate on Israeli government policies against Palestinians.”

Rabbi Alissa Wise, deputy director of Jewish Voice for Peace, echoed Sarsour’s warning about white nationalism, saying, “While valid criticism of Netanyahu, AIPAC, and Israel’s mistreatment of Palestinians are being falsely attacked as anti-Semitism, threats by white supremacists are continuing.”

“And we all know who white supremacists have their sights set on: Black people, Muslims, Jews, immigrants, and more,” Wise concluded. “We’re happy to see a resolution that condemns real bigotry, rather than going after Rep. Ilhan Omar and her vision of a world free of racism and oppression.”

With a final vote expected as early as Thursday evening, House Democrats released the full text of their resolution condemning anti-Semitism, white supremacy, and Islamophobia.

While the text does not mention Rep. Ilhan Omar (D-Minn.) and House Speaker Nancy Pelosi (D-Calif.) insisted it is “not about her,” progressive advocacy groups perceived the resolution as a rebuke of the congresswoman over her criticism of the Israeli lobby.

“This is a dangerous waste of time,” Heidi Hess, co-director of CREDO Action, said in a statement before the text was made public. “Democrats should be spending their time in Congress investigating the purveyors of hate in the Trump White House, not pushing platitudes in order to implicitly condemn one of their own.”

Hess also warned of the unintended consequences of the resolution.

“The next time Rep. Ilhan Omar faces a disingenuous smear, Democratic leaders in the House should have her back, and refuse to police or shame her in order to silence legitimate debate over American foreign policy,” she said.

Watch |  The floor debate on the resolution

As Common Dreams reported, Democratic leaders are facing intense backlash from Jewish organizations and their own members, who have pushed back against the resolution both in public and during heated closed-door meetings.

After appearing to indefinitely postpone the resolution Wednesday night, House Majority Leader Steny Hoyer (D-Md.) announced on Thursday that he would push ahead with a vote despite internal opposition and grassroots protests.

“All Americans should support statements denouncing anti-Semitism, Islamophobia, and other forms of bigotry,” the Council on American-Islamic Relations (CAIR) said in a statement. “Unfortunately, this resolution was introduced to silence legitimate criticism of domestic support for the discriminatory and segregationist policies of a foreign government that receives billions of American taxpayer dollars.”

On Twitter, the youth-led Jewish advocacy group IfNotNow credited grassroots pressure with ensuring that “the new House Resolution [is] more inclusive: it now condemns anti-Semitism, Islamophobia, and racism, while correctly blaming the rise of such bigotry on white nationalism and white supremacy.”

“It is not a perfect resolution,” IfNotNow added. “Its timing still clearly associates it as a rebuke to Ilhan Omar. It, unfortunately, enshrines U.S. support for the Israeli government, which maintains the fifty-one-year military occupation of the West Bank and siege of the Gaza Strip.”

This new resolution talks about white supremacy and white nationalism four times. The previous resolution did not make any mention of those hateful ideologies — which are to blame for rise of antisemitism, Islamophobia, racism, and other bigotry in this country.

Top Photo | Rep. Ilhan Omar, D-Minn., smiles as she stands between Rep. Sheila Jackson Lee, D-Texas, left, and Speaker of the House Nancy Pelosi, D-Calif., as Democrats rally outside the Capitol ahead of passage of H.R. 1, “The For the People Act,” a bill which aims to expand voting rights and strengthen ethics rules, in Washington, March 8, 2019. J. Scott Applewhite | AP

Originally published on Common Dreams, a fraternal site sharing our own values.

US Re-Imprisons Manning To Coerce Her To Testify Against WikiLeaks