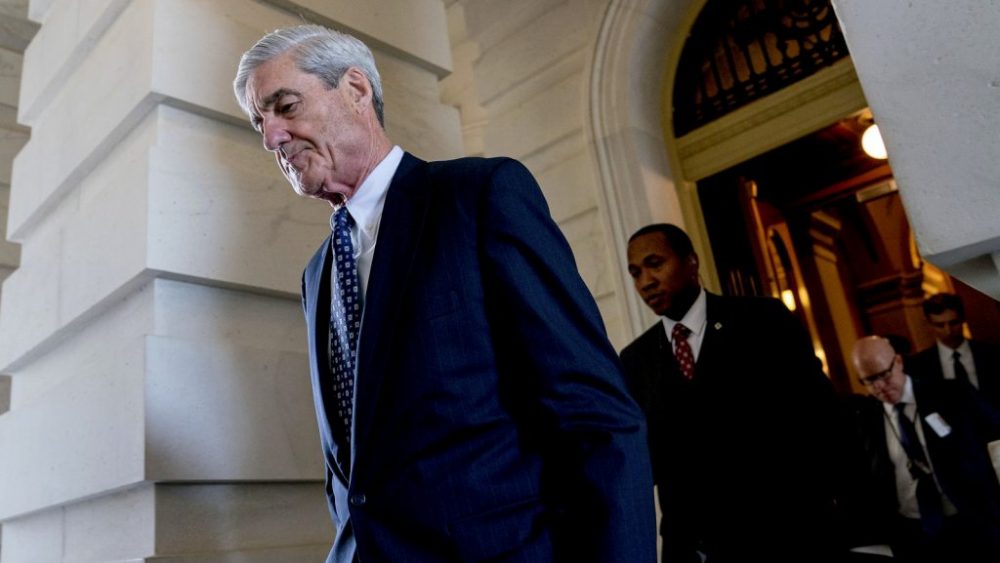 [dropcap]I[/dropcap]f Nietzsche was right, and what doesn’t kill us only makes us stronger, we can thank the global capitalist ruling classes, the Democratic Party, and the corporate media for four more years of Donald Trump. The long-awaited Mueller report is due any day now, or so they keep telling us. Once it is delivered, and does not prove that Trump is a Russian intelligence asset, or that he personally conspired with Vladimir Putin to steal the presidency from Hillary Clinton, well, things are liable to get a bit awkward. Given the amount of goalpost-moving and focus-shifting that has been going on, clearly, this is what everyone’s expecting.

Honestly, I’m a bit surprised. I was sure they were going to go ahead and fabricate some kind of “smoking gun” evidence (like the pee-stained sheets from that Moscow hotel), or coerce one of his sleazy minions into testifying that he personally saw Trump down on his knees “colluding” Putin in the back room of a Russian sauna. After all, if you’re going to accuse a sitting president of being a Russian intelligence asset, you kind of need to be able to prove it, or (a) you defeat the whole purpose of the exercise, (b) you destroy your own credibility, and (c) you present that sitting president with a powerful weapon he can use to bury you.

"Back in November of 2016, the American people were ...so disgusted with being conned by arrogant, two-faced, establishment stooges like the Clintons, the Bushes, and Barack Obama that they chose to put Donald Trump in office, because, fuck it, what did they have to lose?"

This is not exactly rocket science. As any seasoned badass will tell you, when you’re resolving a conflict with another seasoned badass, you don’t take out a gun unless you’re going to use it. Taking a gun out, waving it around, and not shooting the other badass with it, is generally not a winning strategy. What often happens, if you’re dumb enough to do that, is that the other badass will take your gun from you and either shoot you or beat you senseless with it.

This is what Trump is about to do with Russiagate. When the Mueller report fails to present any evidence that he “colluded” with Russia to steal the election, Trump is going to reach over, grab that report, roll it up tightly into a makeshift cudgel, and then beat the snot out of his opponents with it. He is going to explain to the American people that the Democrats, the corporate media, Hollywood, the liberal intelligentsia, and elements of the intelligence agencies conspired to try to force him out of office with an unprecedented propaganda campaign and a groundless special investigation. He is going to explain to the American people that Russiagate, from start to finish, was, in his words, a ridiculous “witch hunt,” a childish story based on nothing. Then he’s going to tell them a different story.

Back in November of 2016, the American people were so fed up with the neoliberal oligarchy that everyone knows really runs the country that they actually elected Donald Trump president. They did this fully aware that Trump was a repulsive, narcissistic ass clown who bragged about “grabbing women by the pussy” and jabbered about building “a big, beautiful wall” and making the Mexican government pay for it. They did this fully aware of the fact that Donald Trump had zero experience in any political office whatsoever, was a loudmouth bigot, and was possibly out of his gourd on amphetamines half the time. The American people did not care. They were so disgusted with being conned by arrogant, two-faced, establishment stooges like the Clintons, the Bushes, and Barack Obama that they chose to put Donald Trump in office, because, fuck it, what did they have to lose?

The oligarchy that runs the country responded to the American people’s decision by inventing a completely cock-and-bull story about Donald Trump being a Russian agent who the American people were tricked into voting for by nefarious Russian mind-control operatives, getting every organ of the liberal corporate media to disseminate and relentlessly promote this story on a daily basis for nearly three years, and appointing a special prosecutor to conduct an official investigation in order to lend it the appearance of legitimacy. Every component of the ruling establishment (i.e., the government, the media, the intelligence agencies, the liberal intelligentsia, et al.) collaborated in an unprecedented effort to remove an American president from office based on a bunch of made-up horseshit … which kind of amounts to an attempted soft coup.

This is the story Donald Trump is going to tell the American people.

A minority of ideological heretics on what passes for the American Left are going to help him tell this story, not because we support Donald Trump, but because we believe that the mass hysteria and authoritarian fanaticism that has been manufactured over the course of Russiagate represents a danger greater than Trump. It has reached some neo-Riefenstahlian level, this bug-eyed, spittle-flecked, cult-like behavior … worse even than the mass hysteria that gripped most Americans back in 2003, when they cheered on the U.S. invasion of Iraq, and the murder, rape, and torture of hundreds of thousands of men, women, and children based on a bunch of made-up horseshit.

It will not be the End of Everything.

The Russo-Nazi Terrorists are not coming. The global capitalist ruling classes are putting down a populist insurgency, delegitimizing any and all forms of dissent from their global capitalist ideology and resistance to the hegemony of global capitalism. In the process, they are conditioning people to completely abandon their critical faculties and behave like twitching Pavlovian idiots who will obediently respond to whatever stimuli or blatantly fabricated propaganda the corporate media bombards them with.

If you want a glimpse of the dystopian future … it isn’t an Orwellian boot in your face. It’s Invasion of the Body Snatchers. Study the Russiagate believers’ reactions to the Mueller report when it is finally delivered. Observe the bizarre intellectual contortions their minds perform to rationalize their behavior over the last three years. Trust me, it will not be pretty. Cognitive dissonance never is.

Or, who knows, maybe the Russiagate gang will pull a fast one at the eleventh hour, and accuse Robert Mueller of Putinist sympathies (or appearing in that FSB video of Trump’s notorious Moscow pee-party), and appoint a special prosecutor to investigate the special prosecutor. That should get them through to 2020!

DISCLAIMER: The preceding essay is entirely the work of the Consent Factory in-house satirist and self-appointed political pundit, CJ Hopkins, and does not reflect the views and opinions of the Consent Factory, Inc., its staff, or any of its agents, subsidiaries, or assigns. If, for whatever inexplicable reason, you appreciate Mr. Hopkins’ work and would like to support it, please go to his Patreon page (where you can contribute as little $1 per month), or send your contribution to his PayPal account, so that maybe he’ll stop coming around our offices trying to hit our staff up for money. Alternatively, you could purchase his satirical dystopian novel, Zone 23, which we understand is pretty gosh darn funny, or any of his subversive stage plays, which won some awards in Great Britain and Australia. If you do not appreciate Mr. Hopkins’ work and would like to write him an abusive email, please feel free to contact him directly.