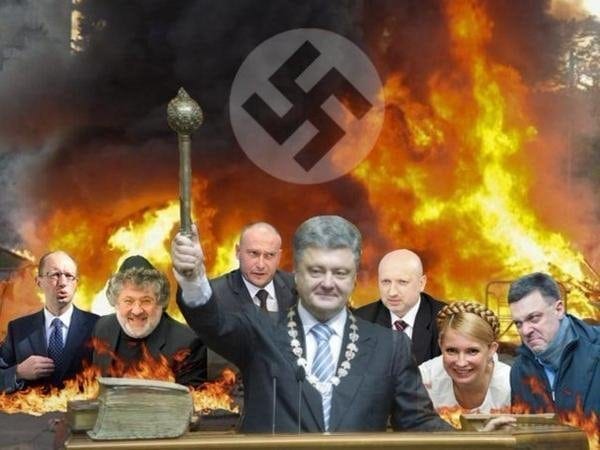 [dropcap]G[/dropcap]allup headlined on March 21st, “Ukraine's Election: Voters Disenchanted Ahead of Key Vote”, and “World-Low 9% of Ukrainians Confident in Government”. Might the reason for both be that no candidate in the contest is respected by the Ukrainian public, and that only three — the candidates with the least-low public approval — are the only ones who have even a remote chance of winning, and that all three of those candidates are racist-fascists, or hold the ideology of nazism? This will be documented here:

Nazism, which is the ideology of fascism but with a heavy added component of racism, has been doing well in post-‘revolutionary’, or post-2013, or post ‘Maidan’ ‘revolution’, Ukrainian politics. The form of racism that dominates today’s Ukraine is against Russians more than against Jews, and so though the ideology is the same as was Germany’s nazi ideology, its main ethnic target isn’t the same. Some of Ukraine’s leading nazis are, in fact, Jews who hate Russians. Whereas Germany’s nazis wanted to exterminate all Jews, Ukraine’s nazis want to exterminate all Russians. But this is all that Ukraine’s voters are being offered, ever since the democratically elected President was thrown out in February 2014. He was fairly unpopular, but not as despised as the politicians who replaced him and his Government are.

The three top Presidential contenders in the upcoming March 31st election, as shown in all the polling, are:

Yulia Tymoshenko, the former ‘gas princess’ who had been convicted and sent to prison for skimming from Ukraine’s gas monopoly, the National Oil and Gas Company of Ukraine. She had established herself as a passionately anti-Russian Prime Minister and had been the preferred candidate of the Barack Obama U.S. Administration to win the 25 May 2014 election, but that election was instead won by a more moderate anti-Russian, the candy and shipbuilding oligarch Petro Poroshenko, who, as President, continued the ethnic-cleansing campaign that had been started by the interim leader of Ukraine who had been selected as Ukraine’s leader in a famous phone call by Victoria Nuland, who was U.S. President Obama’s top operative planning and executing the February 2014 U.S. coup, which coup overthrew the elected President, who hadn’t been sufficiently anti-Russian to suit U.S. President Obama. When I posted the transcript of that phone call years later, I noted that: “This historically mega-important phone-call, which was posted to the internet a week later, on February 4th — three weeks before the man whom she named there received (just as she had instructed) the appointment to lead the post-coup Ukraine — isn’t even being denied by Washington. Instead, it’s either ignored by them, or else totally misrepresented, in the 'historical’ accounts by the agents of the U.S. regime.” The person she selected there to rule the interim government was “Yats” Yatsenyuk, Tymoshenko’s choice, who was chosen because if Nuland had appointed Tymoshenko, then Tymoshenko would have been unable to run in the 25 May 2014 Ukrainian Presidential election.

Petro Poroshenko, the incumbent President, and Ukrainian oligarch who had beaten Tymoshenko in the 2014 contest. He continued the ethnic cleansing campaign because unless enough of the voters in the far eastern region of Ukraine — where the elected President who had been ousted had received over 90% of the votes — were killed or else evacuated Ukraine (mostly by fleeing into neighboring Russia), Ukraine would again have an insufficiently anti-Russian Government to satisfy the U.S. Government, which wanted Ukraine in NATO. Consequently, both the Obama Administration and the IMF were strong supporters of continuing the ethnic-cleansing campaign. (And the U.S. regime is also using white phosphorous to burn whole areas to death in Syria, and a French officer who complained about it was punished by the French Government.) That campaign in far-east former Ukraine had enough success so as to ensure continuation of a rabidly anti-Russian Ukrainian Government, in elections such as now are taking place.

Volodmyr Zelenskiy, the popular Ukrainian actor and comedian who played Ukraine’s President on Ukranian TV, in a series telecast on a TV channel that is owned by the Ukrainian oligarch Ihor Kolomoyskyi, who, as a U.S.-appointed governor in eastern Ukraine during Poroshenko’s Presidency, had planned and overseen in Odessa on 2 May 2014 a massacre of opponents of the U.S. coup. Subsequently, Poroshenko fired Kolomoyskyi — an oil and gas oligarch himself — because Kolomoyskyi's personal team of thugs, which he called his “militia,” had raided the National Oil and Gas Company of Ukraine, in order to expel the new government-appointed chief. So, Kolomoyskyi hates Poroshenko, and is determined that Poroshenko not be re-elected. His preferred candidate, and employee, Zelenskiy, leads in the polling, thus far. Zelenskiy is like a Ukrainian Donald Trump, who also won because he had no plicy-making track-record and he ran against people who did.

Wikipedia’s article “Opinion polling for the 2019 Ukrainian presidential election” shows trendlines for each polling organization and for each of the three major candidates. Zelenskiy is now around 25%, and both Poroshenko and Tymoshenko are each around 18%.

Therefore, Zelenskiy seems to be heading into a run-off against either Poroshenko or Tymoshenko.

The Gallup report on March 21st, “World-Low 9% of Ukrainians Confident in Government”, said that:

Currently in the lead -- according to other national polls in Ukraine -- is comedian and actor Volodymyr Zelensky, who is most widely known for playing the president of Ukraine in the popular television series "Servant of the People." Like his character on the show, Zelensky is campaigning largely on an anti-corruption platform -- which likely resonates with many voters. Incumbent Poroshenko is working to shift the focus off of the many scandals he has been accused of and is taking a hard-line stance, promising to join NATO and reclaim Crimea if he wins re-election. Tymoshenko initially led the large field of candidates but has fallen in the polls recently as rumors regarding her involvement in corrupt deals for natural gas have resurfaced.

However, whoever will ultimately win, will almost certainly continue the U.S. Government’s campaign to get Ukraine admitted into America’s anti-Russian military alliance, NATO, so as to be able to place U.S. missiles close enough to Moscow so that a blitz knockout blow to conquer Russia could — some U.S. strategists hope and believe — become possible.

Obama’s strategy to conquer Russia is being carried forward by his successor, Trump.

Here is additional background on each of the three individuals who is a prospective next President of Ukraine:

Tymoshenko: In a phone-conversation with a political supporter on 18 March 2014, while Tymoshenko was Barack Obama's and Hillary Clinton’s preferred candidate to replace the democratically elected President of Ukraine, Viktor Yanukovych, whom Obama’s February 2014 entirely illegal and very bloody coup in Ukraine had just recently overthrown, the then Ukrainian candidate to replace Yanukovych, Tymoshenko said “We should take weapons and shoot those God damned Russians along with their leader [Putin]. … I hope that [as Ukraine’s President] I will use all my connections [especially Obama and Clinton], and stir the entire world to action in order to make Russia into a field of scorched earth. … We should burn them with nuclear weapons!” Since Ukraine had no nuclear weapons, she was expressing there the hope that her connections inside the U.S. White House and State Department would produce a Third World War that would terminate Russia.

Poroshenko: The way he carried out the ethnic-cleansing campaign that had been started by the interim leader of Ukraine whom Obama’s agent Victoria Nuland had appointed, Arseniy Yatsenyuk, was to capture and kill all leaders of the resistance, and to bomb and terrorize into submission the residents in the resisting region. Under Yatsenyuk, a system was planned to be patterned upon Hitler’s treatment of Jews, Gypsies and other unwanted people, and it entailed concentration camps, but Poroshenko just wanted the people to die or else escape into Russia, so they’d not be voting in any future Ukrainian election. He also wanted the U.S. to help him to defeat the resistors, so that Ukraine could retake Crimea, which had been part of Ukraine during 1954-2014 but was Russian — and strongly pro-Russian ever since at least 1783. The Soviet dictator, Khruschchev, had been Ukrainian, and he arbitrarily transferred Crimea from Russia to Ukraine in 1954. Obama and Clinton insisted that Khruschev’s arbitrary decision continue to be honored, regardless of what the residents of Crimea wanted. Trump does likewise.

Zelenskiy: His patron, Kolomoyskyi, was one of the two main planners of the 2 May 2014 extermination inside the Odessa Trade Unions building, in which people who had distributed leaflets opposing the coup were trapped and burned and clubbed and shot to death. Like Donald Trump when Trump had run for the U.S. Presidency in 2016 against Clinton, Zelenskiy has no political track-record, but only political blatherings, by which his alleged policy-views can become (however dubiously) inferred by voters. And he seems likely to become Ukraine’s President in the same way that Trump did: by having no actual policymaking track-record, and running against opponent(s) whose policymaking track-records the electorate already know to be rotten.

The U.S. regime praises Ukraine now as a ‘democracy’ (and Americans apparently believe that). Before the U.S. take-over, it was called (by the U.S. Government and its allies) ‘authoritarian’ or ‘a dictatorship’. (That was when Ukraine had a freely elected President, who represented the whole country, instead of a truncated country, without the two regions that have the most strongly pro-Russia voters, who had voted the heaviest for that democratically elected President. The U.S. regime wants to control those regions, too, but without its residents. The U.S. regime wants the land, but not the people. The U.S. wants those people there eliminated. This is the type of ‘democracy’ America now is.)