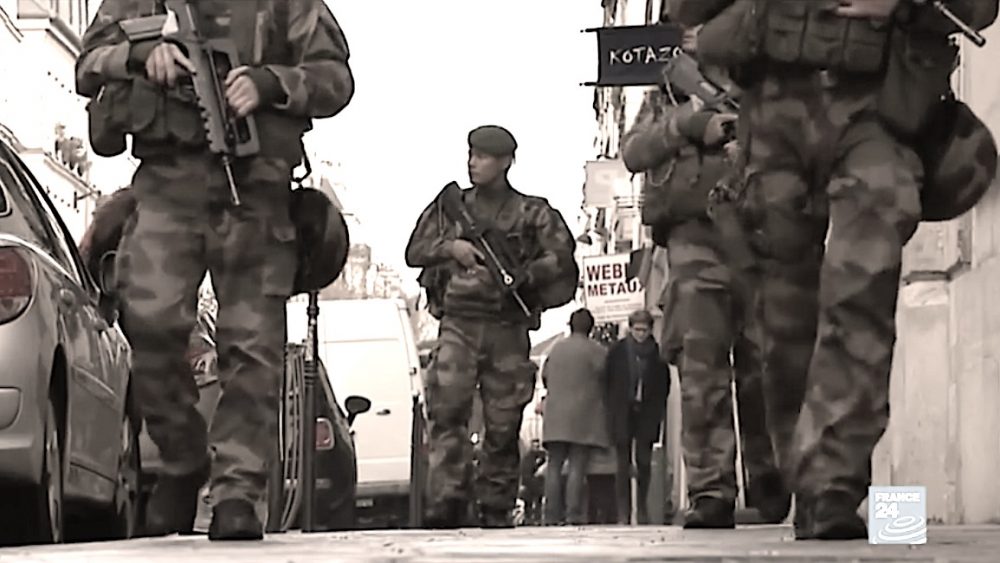 Operation Sentinel soldiers out to contain the Yellow Vests in 2019. The plutocracy begins to show its true colors.

[dropcap]Y[/dropcap]esterday, the governor of the Paris military district told France Info that soldiers of the Operation Sentinel counter-terror mission had been authorized to fire today on the “yellow vests.” Asked about whether soldiers were capable of carrying out law enforcement duties, General Bruno Le Ray replied: “Our orders are sufficiently clear that we do not need to be worried at all. The soldiers’ rules of engagement will be fixed very rigorously.”

“They will have different means for action faced with all types of threats,” he continued. “That can go as far as opening fire.”

Le Ray added that soldiers will have the same rules of engagement for shooting protesters as those for gunning down terrorism suspects inside France: “They will deliver warnings. This has happened in the past, as in (attacks at) the Louvre or at Orly. They are perfectly able to assess the nature of the threat and to respond proportionally.”

These threats against a protest movement against social inequality that is largely peaceful must be taken as a warning by workers and youth not only in France but internationally. As mass protests and strikes erupting outside the control of the union bureaucracies spread across the world, the military and security agencies of the financial aristocracy are preparing to carry out ruthless repression. Even in countries like France with long bourgeois-democratic traditions, they are rapidly moving towards military-police dictatorship.

Since the imposition of a state of emergency suspending basic democratic rights after the 2015 Paris attacks, the army’s Operation Sentinel has sent squads of soldiers marching in France’s streets, wearing bulletproof vests and carrying assault rifles. The current crisis vindicates the WSWS’s longstanding warnings. In every country, the ruling class has used the “war on terror” as a pretext to reinforce state repression that is aimed above all at opposition in the working class.

Amid yesterday’s European Union summit in Brussels, French President Emmanuel Macron spoke to downplay the significance of sending the army against the “yellow vests.” The army is “in no way responsible for maintaining order and public order,” he claimed, mocking criticisms of his resort to the army as a “false debate” fueled by “those who play at scaring themselves and others.”

French Defense Minister Florence Parly followed Le Ray onto France Info and also trivialized the decision to send troops to police the protests. Without explicitly contradicting Le Ray’s report on the orders given to Operation Sentinel forces, she said: “The soldiers of the French army never fire on protesters. … All those who play around with fantasies, who speak about opening fire, are only sowing confusion.”

It is impossible to know in advance whether or how many lives will be lost during army operations against the “yellow vests” today. But the soporific and historically inaccurate statements of Macron and Parly are being openly contradicted by certain soldiers, who are violating military discipline to tell the media about their anger and concern at the orders they are receiving.

“We have no business interfering in this ‘yellow vest’ business,” one soldier anonymously told France Info. “We do not have the necessary equipment, we just have truncheons and little pepper spray bottles like what girls have in their purses. After that, the next thing we have is our assault rifles. … So, if we go up against too many protesters, unfortunately we will probably see fatalities.”

Another soldier stressed his anger at receiving orders from Macron to target the French people: “It is absurd, it’s arbitrary. We are not prepared for this. In technical terms, we fight military enemies. And the enemy cannot be the entire population, that is not possible. That is the situation they are trying to put soldiers in today.”

General Vincent Desportes, the former head of the War Academy, made clear his skepticism about claims from within the Macron government that riot police will always manage to get between protesters and the soldiers, to ensure that the latter do not fire on the former.

He said, “Until now the security forces have not shown themselves entirely capable of controlling large crowds of protesters. If violent protesters come into contact with the soldiers, there is a serious risk that blood will be spilt. … The last time soldiers were used for law enforcement was in Algeria, more than 50 years ago. As you well know, at that point blood was spent, a lot of blood was spent.”

The result of the last intervention of the army against workers on what is currently French soil, in the insurrectionary strikes of 1947-8 against the bourgeois Republic established by the Gaullists after World War II and the fall of European fascism, was a massacre. As 350,000 miners went on strike, the army occupied the mines with an authorization to fire on the strikers. The resulting clashes led to six dead, thousands of wounded, and the firing of 3,000 miners, a decision legally recognized as discriminatory in 2011.

In Algeria, the use of the army to torture and kill Algerians rising up against French colonialism, barely more than a decade after these same methods were used in France itself by the Nazis and the Nazi-collaborationist Vichy regime, left over 300,000 dead in the 1954-1962 war.

These historical events are a warning as to the implications of mobilizing the army against the working class. They vindicate the strategy proposed by the Parti de l’égalité socialiste (PES) amid the “yellow vest” movement. Amid widespread hostility of workers internationally against the union bureaucracies and established political parties, the PES called for building independent committees of action and stressed the necessity of transferring state power in France and across Europe to such organizations of the working class.

This also requires building the PES as the political alternative to the petty bourgeois political parties, rejected by a broad majority of “yellow vests.” These parties try to tie the workers to Macron by proposing to negotiate a democratization of society with him and the trade unions.

Many of these parties—including the French Communist Party, the New Anticapitalist Party, the Greens, Jean-Luc Mélenchon’s Unsubmissive France, and the Independent Democratic Workers Party—came together yesterday to issue a pathetic “united” appeal to Macron.

Criticizing “the government’s authoritarian excesses,” they begged Macron to cease ignoring them and negotiate more with them to try to calm the situation: “The sidelining of the social, ecological and trade union movements, contempt for those who speak truth to power, is a way of preventing all dialog, all positive outcomes to the crises of our time. … The calming of tensions we desire also requires the state power to respond concretely to the aspirations for social justice that are widely expressed in our country.”

But there is nothing to negotiate with Macron. By sending the army against the “yellow vests,” he is sending a clear signal that the financial aristocracy and the state authorities have no intention of realizing the social aspirations of the working class. They want to crush these aspirations, and if necessary to drown them in blood.

The current crisis exposes the utter bankruptcy of their strategy of tying the workers to capitalist politicians and the capitalist state. During the 2017 election, all these parties adapted themselves to the official propaganda presenting Macron as a lesser evil than neo-fascist candidate Marine Le Pen. Now that Macron has declared his admiration for fascist dictator Philippe Pétain and sent the army against the “yellow vests,” this propaganda is exposed as an utter fraud.

Faced with Macron’s historic threat against the workers, the turn is to the construction of independent organizations of the working class <> as their revolutionary vanguard.

ABOUT THE AUTHOR
The writer is an European correspondent for wsws.org, a Trotkyist publication.

Russiagate Is Really Finished. (We told you so right when it began!)