Home ABOMINATIONS With Extradition Imminent, the Implications of Assange’s Persecution for Journalism and Democracy 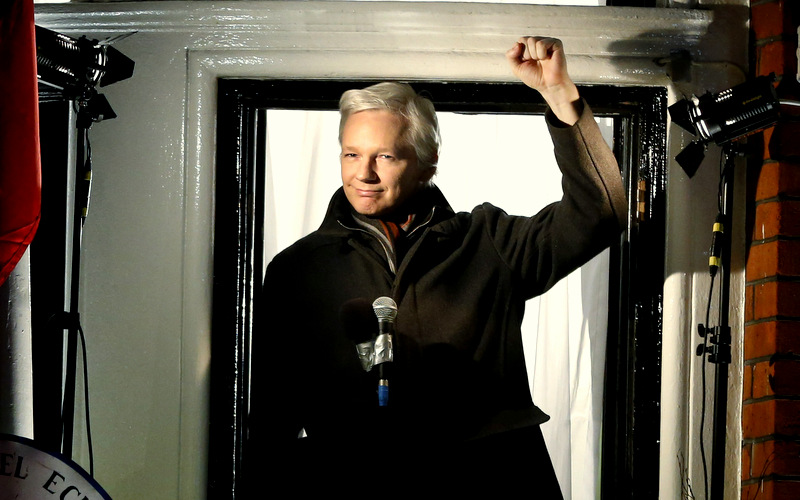 In Case You Missed it

In light of Wikileaks tweeting that Julian Assange will be forcibly removed from the Ecuadorian embassy in a matter of “hours or days, MPN brings you a piece by Whitney Webb first published last June on the dangerous implications of the persecution of the Wikileaks founder.
by Whitney Webb / MINTPRESS NEWS

Due to recent claims made by WikiLeaks on Twitter that Julian Assange will be forcibly removed from the Ecuadorian embassy in London in a matter of “hours or days,” MintPress News has brings you this editorial first published last June by journalist Whitney Webb in order to again highlight the dangerous precedent for journalism, free speech and much more the end of Assange’s asylum — and his likely extradition to the United States — would set.

LONDON  (Opinion) – Today marks the sixth anniversary of Julian Assange’s ascent to the position of the world’s most well-known political refugee after daring to be the public face of the ground-breaking transparency organization WikiLeaks. Arbitrarily detained in the Ecuadorian Embassy in London for more than half a decade, Assange’s precarious situation – a product of the U.S. and U.K. governments’ efforts to destroy and silence him forever – threatens to devolve into tragedy.

If Assange’s asylum is suspended or he is extradited to the United States, however, it will be much more than a personal tragedy for Assange. It will also be a tragedy for the public’s “right to know” and the free flow of information — the first major loss to an empire’s battle to quash dissent and silence those who seek to use information to liberate rather than deceive.

Assange’s case means much more than the severe mistreatment – torture, as some have said – of a single man whose commitment to bringing the dark deeds of government crimes to light has forced him to sacrifice seeing the outside world – even his own children – for the better part of a decade. Though his mistreatment has no place in any civilized “democracy,” the outcome of Assange’s case – if his extradition to the United States does come to pass – will have a powerful impact for journalism as a whole. Indeed, if the U.S.-led campaign to extradite and silence Assange is successful, it will invariably become the blueprint used by powerful governments like the U.S. to silence independent journalists the world over, and bludgeon them into submission.

The journalistic path of least resistance

U.S. government efforts to destroy WikiLeaks – and Assange in particular – are well-documented, having been hatched long before Assange sought political asylum in the Ecuadorian Embassy. Though efforts to discredit the organization have largely been more covert, the campaign targeting Assange has been crafted to target the man, manifesting in innumerable dishonest and savage attacks on his reputation, his dignity, even his fundamental human rights. It was a campaign waged largely with the complicity of the so-called “free press” — with journalists who actually benefited from Assange’s sacrifices and WikiLeaks’ releases often leading the charge to smear the man whose work has championed the importance of the public’s uncensored access to crucial information.

The complicity of such “journalists” betrays the fact that Julian Assange’s situation is a part of the fight for the heart and soul of journalism itself. Indeed, his persecution has taken place amid a backdrop of extreme social-media censorship — with the complicity of Google and its subsidiary YouTube, as well as Facebook and Twitter — pointing to the larger “information war” currently underway. Assange’s case is the Waterloo of that war, that fight between governments – and the elites they serve – and those who wish to keep the public informed and masters of their own destiny. As Assange himself once stated:

You can either be informed and [be] your own rulers, or you can be ignorant and have someone else, who is not ignorant, rule over you.”

Powerful governments like the United States do not seek to enlighten the public and let them make their own decisions. Edward Bernays, the “father of American propaganda,” said as much decades ago when he wrote the following:

The conscious and intelligent manipulation of the organized habits and opinions of the masses is an important element in democratic society. Those who manipulate this unseen mechanism of society constitute an invisible government which is the true ruling power of our country. … We are governed, our minds are molded, our tastes formed, our ideas suggested, largely by men we have never heard of.”

For that “manipulation” of the public to continue unimpeded, journalists must be transformed from vanguards of truth and the public’s “right to know” into obedient stenographers of the official government narrative. Assange, more than anyone else, has threatened this attempted transformation by leading an organization that “opens governments,” and by challenging the upward flow of information to “bishops and kings, not down to slaves and serfs.” It is for that reason, above all else, that he has been treated the way he has and why – if extradited – the full fury of the American oligarchy and its empire will likely be unleashed upon him.

Every time we witness an injustice and do not act, we train our character to be passive in its presence and thereby eventually lose all ability to defend ourselves and those we love.”  – Julian Assange

Yet, if the worst comes to pass, Assange will hardly be the end of efforts to silence real, independent journalism. Rather, it will be the beginning of a larger effort, already underway, aimed at crushing the very type of journalism exemplified by Assange wherever it emerges. If the United States is ultimately successful in extraditing and silencing Assange, it will consider the campaign that it has waged against him a success. It will then apply those tactics to anyone who dares to offer the public an alternative to the government-supplied narrative, regardless of where they live and who they are.

If we continue to sit back and allow the state-sanctioned torture of Assange to go on, it is likely that we too will remain silent when the same tactics and smears are applied to other independent journalists who dare to defy the oligarchy and its empire. Their goal is to have the public just as isolated and gagged as Assange himself has been.

As Assange once warned, our failure to collectively act in the face of such injustice will eventually lead to an inability to defend ourselves and those that are dear to us, as such toxic passivity is a greater threat to “democracy” and humanity’s freedom than any threat of physical violence. Such passivity will allow the “powers that be” to lead the world down an Orwellian path of censorship, totalitarianism and destruction.

There is no greater warrior in the resistance of that agenda than Julian Assange, and the world’s continued silence on his case will ensure that the demise of journalism, and of democracy, will be the sad result of our passivity, our unwillingness to make sacrifices to aid those who have made sacrifices for us. The outcome of Assange’s case will not mark the end of this struggle, but it certainly will mark its turning point.

Top Photo  | WikiLeaks founder Julian Assange waves to supporters as he prepares to make a statement to the media and supporters at a balcony of the Ecuadorian Embassy in central London, Thursday, Dec. 20, 2012. Lefteris Pitarakis | AP

The best way to get around the internet censors and make sure you see the stuff we publish is to subscribe to the mailing list for our website, which will get you an email notification for everything we publish.
ABOUT THE AUTHOR
Whitney Webb is a staff writer for MintPress News and a contributor to Ben Swann’s Truth in Media. Her work has appeared on Global Research, the Ron Paul Institute and 21st Century Wire, among others. She has also made radio and TV appearances on RT and Sputnik. She currently lives with her family in southern Chile.