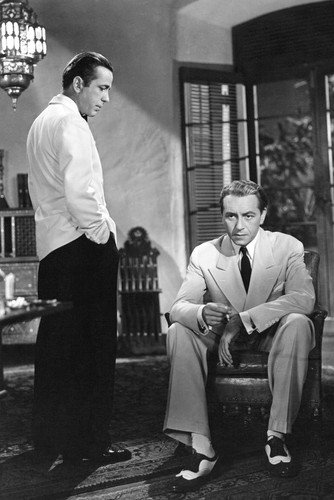 This writer's favorite film of all time, right ahead of Seven Days In May and JFK is of course Casablanca. The film had it all, from WW2 suspense to old fashioned romance... with a good dose of twists and turns. In the film Paul Henreid plays Victor Laszlo, the Czech resistance leader, who has already escaped and eluded the Gestapo a few times. Laszlo has  been tortured on more than one occasion, yet told them nothing important. He comes to Casablanca in search of a way to leave North Africa and go to the USA to continue his important work. In a powerful scene near the end of the film Laszlo and Humphrey Bogart's lead character Richard Blaine (AKA Rick of Rick's Cafe Americain)  discuss Laszlo's work:

Rick:  Did you ever wonder if all of this is worth it?

Victor: You might as well question why we breathe. If we stop breathing we will die. We stop fighting our enemies and the world will die!

How many times those of us who swim against the current of popular belief have asked ourselves questions like that. How many times our close friends and loved ones may have asked us " Hey, you're not getting paid for what you're doing and it's getting you nowhere. Why not just chuck it and live a life?" The answer usually comes from deep within us. Look at the work of Julian Assange, Chelsea Manning and Eric Snowden. These three not only risked their entire careers but one did jail time, and all three face false charges of treason in their quest for truth and justice. When the US government, in league with their international lackeys, has committed so many war crimes and crimes against humanity, those three, like Victor Laszlo, jumped into the fray and told the truth. Remember the horrific and disgraceful Apache helicopter massacre of July, 2007? That was when gun crews were heard on tape firing on a group of unarmed Iraqi men ( with two Reuters journalists among them) as if it was some fucking video game! From ten to eighteen men were killed, and two children sitting in a car were badly wounded! Yet, the release of this film was seen by US authorities as a breach of what, national security? If Victor Laszlo had access to such information against the illegal occupiers of his country, he would have done the same thing.

I asked a few colleagues and guests of my radio show as to why they write and rally others for the cause of defying this empire:

Paul Edwards, filmmaker and columnist: I write because it's what I can do to fight the sickening fraud, deceit and injustice and crime of my own vicious and corrupt country: America!

Peter Koenig, geopolitical analyst, lecturer and writer: Yes, we are surrounded by what some call the Devil's Minions. ... this should give us more energy to NOT LET GO! Do we have the stamina to bring sufficient conscience into the war arena to slowly turn that ship around?

Bob Koehler, Anti war and anti empire columnist : Activism isn't about shaking your fist at the bad guys. It's about co-creating the future. It's participatory evolution. To the extent that I listen to my soul, I am an activist.

Edward Curtin, professor, historian and anti imperialist writer- It is the call of my conscience, a spiritual necessity. Or call it simply my human response to violence and injustice. I could not live with myself if I did not respond.

Patrice Greanville, Media & geopolitical analyst: Revulsion.  The US empire represents what organised, sociopathic selfishness—capitalism—will do on a global scale when given favorable circumstances. As a virulent plutocracy, America is and has been for a long time the worst enemy of peace, justice and democracy, and a scourge not only on humans and innumerable helpless creatures, but the lifegiving planet itself, which it sees only as a resource to endless wealth and power. All wrapped up in a monumental cocoon of hypocrisy. Minimum decency obligates us to resist.

It seems like Americans always look for leaders to speak for them in every such manner. NO, what we need here during these terrible times, are more regular folks, like those quoted above, to speak up and  speak out for themselves about the need for drastic change. Why drastic? Well, as with WW2 Europe, the forces of evil , with their lust for greed and power, are ' Too Big To Succeed' and must be thwarted. Victor Laszlo , Julian Assange, Chelsea Manning and Eric Snowden were not schooled to become activists. They chose to!!

Philip A Farruggio  is contributing editor for The Greanville Post. He is also frequently posted on Global Research, Nation of Change, World News Trust and Off Guardian sites. He is the son and grandson of Brooklyn NYC longshoremen and a graduate of Brooklyn College, class of 1974. Since the 2000 election debacle Philip has written over 300 columns on the Military Industrial Empire and other facets of life in an upside down America. Philip has an internet interview show, "It's the Empire... Stupid" with producer Chuck Gregory, and can be reached at paf1222@bellsouth.net