A Marriage of Conscience: Julian Assange and Chelsea Manning 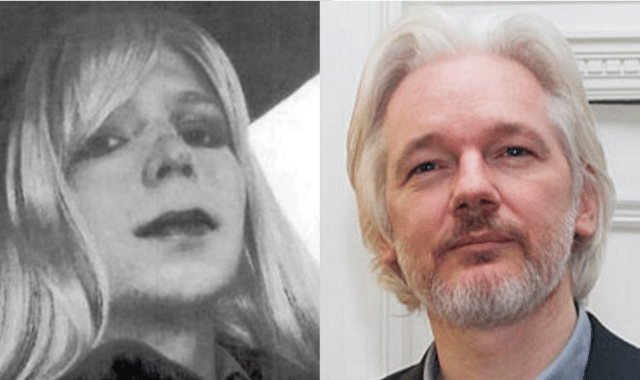 These lines occurred to me last week when all eyes were focused on the brutal British seizure of Julian Assange from the Ecuadorian Embassy in London.

No one should have been surprised by this despicable spectacle carried out in the noonday light for all to see, for the British government has not served as America’s jailer for the past seven years for no reason. It doesn’t take x-ray eyes to see that the British and the Moreno government in Ecuador are twin poodles on the American leash. After a phony display of judicial fairness, the British, as required by their American bosses, will dispatch Assange to the United States so he can be further punished for the crime of doing journalism and exposing war crimes.

Assange has suffered mightily for American sins. The Anglo-American torturers know how to squeeze their victims to make old men out of the young. Abu Ghraib was no aberration. The overt is often covert; just a thin skin separates the sadists’ varied methods, but their message is obvious. No one who saw Assange dragged to prison could fail to see what the war-mongers, who hate freedom of the press when it exposes their criminal activities, can do to a man. Nor, however, could one fail to see the spirit of defiance that animates Assange, a man of courageous conscience cowards can’t begin to comprehend.

Bought and sold, compromised and corrupted to their depths, the American, British, and Ecuadorian governments and their media sycophants have no shame or allegiance to law or God, and have never learned that you can imprison, torture, and even kill a person of conscience, but that doing so is a risky business. For even the corpses of those who say “No” keep whispering “No” forevermore.

While the media spotlight was on central London, Auden’s lines kept running through my mind:

About suffering they were never wrong,
The Old Masters, how well they understood
Its human position: how it takes place
While someone else is eating or opening a window or just
Walking dully along

His words transported me from London to a lonely jail cell in Virginia where Chelsea Manning sat brooding. Chelsea hearing the news about Assange. Chelsea realizing that now the screws would be further tightened and her ordeal as a prisoner of conscience would be extended indefinitely. Chelsea summoning all her extraordinary courage to go on saying “No,” “No,” “No.” Chelsea refusing the 30 pieces of silver that will be continually offered to her, as they have been for almost a decade, and that she has refused in her emphatic refusal to give the Judas kiss to Julian, to whom she is wed in this non-violent campaign to expose the truth about the war criminals.

Auden’s words reminded me not to turn away, to pay attention, to not walk dully along and ignore the lonely suffering of truth-tellers. How can anyone who claims to oppose the American wars on Afghanistan, Iraq, Syria, Libya, etc., turn away from defending Manning and Assange, two brave souls who have already spent nearly 15 years combined imprisoned for exposing the war crimes of the American and British governments, crimes committed in our name and therefore our crimes.

Who will have the bad faith to buy the torrent of lies that the propagandists will spew forth about Assange as they wage a media blitz to kill his reputation on the way to disposing of him?

The jackals in government and media, so-called liberals and conservatives, will be sadistically calling for blood as they count their blood money and wipe their lips. Only cowards will join this bleating crowd and refuse to go to that lonely, empty place – that cell of conscience – where the truth resides.

All should remember that Chelsea Manning spent more than seven years in prison under the Obama administration for revealing a video about George W. Bush’s war crimes in Iraq; that Assange had to escape the Obama administration’s clutches by seeking asylum in the Ecuadorian embassy; and that now that Trump is in office, the reimprisonment of Manning and arrest of Assange are perfectly in accord with the evil deeds of his predecessors. These men are titular heads of the warfare state. They follow orders.

Who can sail calmly on and pretend they don’t see the gift of truth and hear the forsaken cries of two lonely caged heroes falling into the sea? Who can fail to defend such voices of freedom?

America Just Declared War on Iran and Nobody Blinked

Which Candidates Are Mentioned Most Often on TV News?