THE MUELLER REPORT’S LONG TAIL—Moon of Alabama weighs in 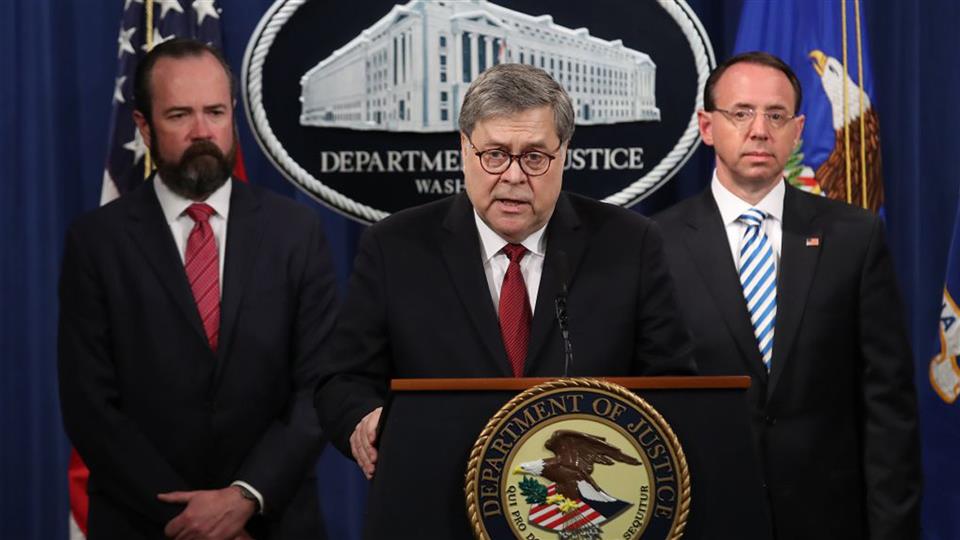 Striking a solemn pose does not make the report a serious document. Such photo ops only serve to convince the public we still have a government of laws, which is a lie in itself, as is Russiagate. No matter how much the Democrats inflate this document, it’s not the Magna Carta.

The report (pdf) by Special Counsel Robert Mueller is out. Russiagaters will now try to find any word in there that they could use to contradict the report’s conclusion. While I intend to read the full report and to write about it, that will require more time.

For now we are left with the remarks of Attorney General William P. Barr on the release of the report:

Barr says that the Mueller report insists that Russia attempted to interfere in U.S. elections:

First, the report details efforts by the Internet Research Agency, a Russian company with close ties to the Russian government, to sow social discord among American voters through disinformation and social media operations.

How exactly was it established that the IRA intended to “sow social discord”. Is there any IRA witness that said so? Any documents? No. It is a made up reasoning. The IRA activities were driven by commercial interests. To get as many page-views as possible IRA personnel posted memes on both sides of the political spectrum simply because that is where the viewership is. Just ask Foxnews or CNN. There was no political intent in the IRA’s activity. To claim that it intended to “sow social discord” is baseless nonsense.

Dripping sanctimonious exceptionalism, the US media and political class talk about Russian meddling as if America was not the world’s foremost meddler in scores of nations’s affairs, including, quite blatantly, Russia. —Editor

The claims by social networks that “Russians” did this or that are dubious. Twitter for example recently revised its count of “Russian trolls”:

On Feb. 8, Twitter removed 228 accounts from the Russian IRA dataset because the social-media company now believes these accounts were operated by a different trolling network located in Venezuela. “We initially misidentified 228 accounts as connected to Russia,” Yoel Roth, Twitter’s head of site integrity, wrote in an online post. “As our investigations into their activity continued, we uncovered additional information allowing us to more confidently associate them with Venezuela.”
…
Twitter’s change to its data undercuts all of these analyses of the troll farm’s 2017 activity, Clemson researchers said. There was no surge in IRA Twitter activity in mid-2017, and the high-volume accounts that churned out links to ReportSecret were, in fact, being operated by a different, unknown group operating out of Venezuela, according to the updated data.Twitter is reluctant to discuss how it connects accounts to trolling networks.

Twitter “is reluctant” because the company has simply no way to find that some real person driven account is a “troll”. It is a completely subjective judgement.

Second, the report details efforts by Russian military officials associated with the GRU to hack into computers and steal documents and emails from individuals affiliated with the Democratic Party and the presidential campaign of Hillary Rodham Clinton for the purpose of eventually publicizing those emails.

Former British Ambassador Craig Murray as well as Julian Assange of Wikileaks were involved in the transfer and publishing of the DNC emails. They both publicly insisted that “Russia” was not involved in the recovering and transfer of these. Neither of them was questioned by the Mueller investigation.

The emails of Hillary Clinton’s campaign manager Podesta were obtained via password fishing. Russian intelligence might have had a hand in that as might have other intelligence services. No proof has been presented yet to make that case. It may well be that the Mueller report provides some.

As for Wikileaks or Assange being culpable for publishing the pilfered emails Barr remarks:

Under applicable law, publication of these types of materials would not be criminal unless the publisher also participated in the underlying hacking conspiracy. (1)

After nearly two years of investigation, thousands of subpoenas, and hundreds of warrants and witness interviews, the Special Counsel confirmed that the Russian government sponsored efforts to illegally interfere with the 2016 presidential election but did not find that the Trump campaign or other Americans colluded in those schemes.

Barr then talks about the Mueller finding about obstruction:

[T]he report recounts ten episodes involving the President and discusses potential legal theories for connecting these actions to elements of an obstruction offense.After carefully reviewing the facts and legal theories outlined in the report, and in consultation with the Office of Legal Counsel and other Department lawyers, the Deputy Attorney General and I concluded that the evidence developed by the Special Counsel is not sufficient to establish that the President committed an obstruction-of-justice offense.

Trump said a lot on Twitter and elsewhere that led people to believe that he was obstructing the Mueller investigation. But as always with Trump (and other politicians) one has to differentiate between what Trump says and what action he takes. Publicly musing about firing Mueller or someone else is different from actually doing it. The first is free speech, the second might be obstruction.

As Barr points out:

[A]s the Special Counsel’s report acknowledges, there is substantial evidence to show that the President was frustrated and angered by a sincere belief that the investigation was undermining his presidency, propelled by his political opponents, and fueled by illegal leaks. Nonetheless, the White House fully cooperated with the Special Counsel’s investigation, providing unfettered access to campaign and White House documents, directing senior aides to testify freely, and asserting no privilege claims. And at the same time, the President took no act that in fact deprived the Special Counsel of the documents and witnesses necessary to complete his investigation. Apart from whether the acts were obstructive, this evidence of non-corrupt motives weighs heavily against any allegation that the President had a corrupt intent to obstruct the investigation.

The case is closed. Neither was there a Trump campaign ‘collusion’ with anything Russian nor was there obstruction by the Trump administration.

Unfortunately Russiagaters will not give up on their conspiracy theories anytime soon.

They should. Trump’s policies are bad. It is high time to get back to real politics and fight him were it is worth to do so.

Notes
(1) There was no “hacking conspiracy”. The data dump was obtained by an internal leak.

IIRC, didn’t the IRA want to come to America to testify after being indicted in absentia and then Meuller freaked out that he would have to give discovery to their lawyers and asked the judge to intervene.

Contrary to fighting Trump’s terrible policies, the Dems collude with them. There are always enough Dem votes in Congress to pass whatever horrific legislation Trump wants. Meanwhile, the two years of Russiagate propaganda preempted any investigation of Trump’s actual crimes. But the McResistance did wear pink pussy hats, so that must count for something.

About the Author
“b” is the nom de guere of Moon of Alabama’s founding editor.