Published: April 25, 2019Last Updated on April 26, 2019 9 minutes read
Another important dispatch from The Greanville Post. Be sure to share it widely.

[dropcap]L[/dropcap]et’s be blunt: As a supposed friend of American workers, Joe Biden is a phony. And now that he’s running for president, Biden’s huge task is to hide his phoniness.

From the outset, with dim prospects from small donors, the Biden campaign is depending on big checks from the rich and corporate elites who greatly appreciate his services rendered. “He must rely heavily, at least at first, upon an old-fashioned network of money bundlers — political insiders, former ambassadors and business executives,” the New York Times reported on Tuesday. 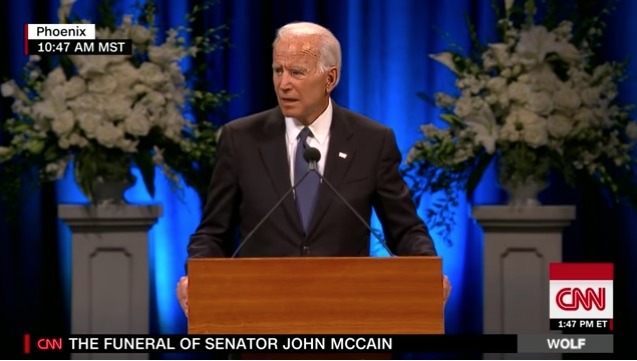 Joe Biden eulogizing John McCain. Need we say anything else?.

Biden has a media image that exudes down-to-earth caring and advocacy for regular folks. But his actual record is a very different story.

During the 1970s, in his first Senate term, Biden spouted white backlash rhetoric, used tropes pandering to racism and teamed up with arch segregationists against measures like busing for school integration. He went on to be a fount of racially charged appeals and “predators on our streets” oratory on the Senate floor as he led the successful effort to pass the now-notorious 1994 crime bill.

A gavel in Biden’s hand repeatedly proved to be dangerous. In 1991, as chair of the Judiciary Committee, Biden prevented key witnesses from testifying to corroborate Anita Hill’s accusations of sexual harassment during the Clarence Thomas confirmation hearings for the Supreme Court. In 2002, as chair of the Foreign Relations Committee, Biden was the Senate’s most crucial supporter of the Iraq invasion.

Meanwhile, for well over four decades — while corporate media preened his image as “Lunch Bucket Joe” fighting for the middle class — Biden continued his assist for strengthening oligarchy as a powerful champion of legalizing corporate plunder on a mind-boggling scale.

Now, Joe Biden has arrived as a presidential candidate to rescue the Democratic Party from Bernie Sanders.

Urgency is in the media air. Last week, the New York Times told readers that “Stop Sanders” Democrats were “agonizing over his momentum.” The story was front-page news. At the Washington Post, a two-sentence headline appeared just above a nice photo of Biden: “Far-Left Policies Will Drive a 2020 Defeat, Centrist Democrats Fear. So They’re Floating Alternatives.”

Biden is the most reliable alternative for corporate America. He has what Sanders completely lacks — vast experience as an elected official serving the interests of credit-card companies, big banks, insurance firms and other parts of the financial services industry. His alignment with corporate interests has been comprehensive. It was a fulcrum of his entire political career when, in 1993, Sen. Biden voted yes while most Democrats in Congress voted against NAFTA.

In recent months, from his pro-corporate vantage point, Biden has been taking potshots at the progressive populism of Bernie Sanders. At a gathering in Alabama last fall, Biden said: “Guys, the wealthy are as patriotic as the poor. I know Bernie doesn’t like me saying that, but they are.” Later, Biden elaborated on the theme when he told an audience at the Brookings Institution, “I don’t think five hundred billionaires are the reason we’re in trouble. The folks at the top aren’t bad guys.”

Overall, in sharp contrast to the longstanding and continuing negative coverage of Sanders, mainstream media treatment of Biden often borders on reverential. The affection from so many high-profile political journalists toward Biden emerged yet again a few weeks ago during the uproar about his persistent pattern of intrusively touching women and girls. During one cable news show after another, reporters and pundits were at pains to emphasize his essential decency and fine qualities.

But lately, some independent-minded journalists have been exhuming what “Lunch Bucket Joe” is eager to keep buried. For instance:

+  Libby Watson, Splinter News: “Joe Biden is telling striking workers he’s their friend while taking money from, and therefore being beholden to, the class of people oppressing them. According to Axios, Biden’s first fundraiser will be with David Cohen, the executive vice president of and principal lobbyist for Comcast. Comcast is one of America’s most hated companies, and for good reason. It represents everything that sucks for the modern consumer-citizen, for whom things like internet or TV access are extremely basic necessities, but who are usually given the option of purchasing it from just one or two companies.” What’s more, Comcast supports such policies as “ending net neutrality and repealing broadband privacy protections. . . . And Joe Biden is going to kick off his presidential campaign by begging for their money.”

+  Ryan Cooper, The Week: “As a loyal toady of the large corporations (especially finance, insurance, and credit cards) that put their headquarters in Delaware because its suborned government allows them to evade regulations in other states, Biden voted for repeated rounds of deregulation in multiple areas and helped roll back anti-trust policy — often siding with Republicans in the process. He was a key architect of the infamous 2005 bankruptcy reform bill which made means tests much more strict and near-impossible to discharge student loans in bankruptcy.”

+  Paul Waldman, The American Prospect: “Joe Biden, we are told over and over, is the one who can speak to the disaffected white men angry at the loss of their primacy. He’s the one who doesn’t like abortion, but is willing to let the ladies have them. He’s the one who tells white people to be nice to immigrants, even as he mirrors their xenophobia (‘You cannot go to a 7-Eleven or a Dunkin’ Donuts unless you have a slight Indian accent,’ he said in 2006). He’s the one who validates their racism and sexism while gently trying to assure them that they’re still welcome in the Democratic Party. . . . It’s not yet clear what policy agenda Biden will propose, though it’s likely to be pretty standard Democratic fare that rejects some of the more ambitious goals other candidates have embraced. But Biden represents something more fundamental: a link to the politics and political style of the past.”

+  Rebecca Traister, The Cut: “Much of what Democrats blame Republicans for was enabled, quite literally, by Biden: Justices whose confirmation to the Supreme Court he rubber-stamped worked to disembowel affirmative action, collective bargaining rights, reproductive rights, voting rights. . . . In his years in power, Biden and his party (elected thanks to a nonwhite base enfranchised in the 1960s) built the carceral state that disproportionately imprisons and disenfranchises people of color, as part of what Michelle Alexander has described as the New Jim Crow. With his failure to treat seriously claims of sexual harassment made against powerful men on their way to accruing more power (claims rooted in prohibitions that emerged from the feminist and civil-rights movements of the 1970s), Biden created a precedent that surely made it easier for accused harassers, including Donald Trump and Brett Kavanaugh, to nonetheless ascend. Economic chasms and racial wealth gaps have yawned open, in part thanks to Joe Biden’s defenses of credit card companies, his support of that odious welfare-reform bill, his eagerness to support the repeal of Glass-Steagall.”

One of Biden’s illuminating actions came last year in Michigan when he gave a speech — for a fee of $200,000 including “travel allowance” — that praised the local Republican congressman, Fred Upton, just three weeks before the mid-term election. From the podium, the former vice president lauded Upton as “one of the finest guys I’ve ever worked with.” For good measure, Biden refused to endorse Upton’s Democratic opponent, who went on to lose by less than 5 percent.

Biden likes to present himself as a protector of the elderly. Campaigning for Sen. Bill Nelson in Florida last autumn, Biden denounced Republicans for aiming to “cut Social Security, Medicare and Medicaid.” Yet five months earlier, speaking to the Brookings Institution on May 8, Biden spoke favorably of means testing that would go a long way toward damaging political support for Social Security and Medicare and smoothing the way for such cuts.

Indications of being a “moderate” and a “centrist” play well with the Washington press corps and corporate media, but amount to a surefire way to undermine enthusiasm and voter turnout from the base of the Democratic Party. The consequences have been catastrophic, and the danger of the party’s deference to corporate power looms ahead. Much touted by the same kind of insular punditry that insisted Hillary Clinton was an ideal candidate to defeat Donald Trump, the ostensible “electability” of Joe Biden has been refuted by careful analysis of data.

As a former Sanders delegate to the 2016 Democratic National Convention and a current coordinator of the relaunched independent Bernie Delegates Network for 2019, I remain convinced that the media meme about choosing between strong progressive commitments and capacity to defeat Trump is a false choice. On the contrary, Biden exemplifies a disastrous approach of jettisoning progressive principles and failing to provide a progressive populist alternative to right-wing populism. That’s the history of 2016. It should not be repeated.

ABOUT THE AUTHOR
Norman Solomon is executive director of the Institute for Public Accuracy, where he coordinates ExposeFacts. Solomon is a co-founder of RootsAction.org.

BRI FORUM IN BEIJING AND HOW WESTERN ‘REPORTS’ ARE SMEARING CHINA